FRANKFURT (Reuters) – Just weeks after unveiling a massive stimulus scheme, the European Central Bank is under pressure to deploy even more firepower on Thursday to prop up an economy that could shrink by a tenth this year.

As it prints cash at a record pace to soak up ballooning state debt during the coronavirus pandemic, the ECB is on its way to exhausting its quota of bond buying early.

This may raise doubts down the line about how committed it is to helping the euro zone through the worst economic crisis for decades and may encourage it to boost its support, also to keep pace with an increasingly interventionist U.S. Federal Reserve.

However, policymakers are also keen to keep some pressure on the bloc’s political leadership, which has so far fumbled its fiscal response, leaving the ECB in a familiar role as the currency union’s chief crisis fighter.

The dilemma suggests ECB policymakers will discuss expanding stimulus, although a big move is unlikely to come until later – perhaps in June – when the extent of the economic damage will be easier to quantify.

By the ECB’s next regular meeting on June 4, the outlines of a so far elusive political deal on a trillion euro reconstruction fund should also be apparent, making it easier for the ECB to do its part.

“It is more likely that the ECB could sit on its hands in order to keep up the pressure on European governments to adopt further aid packages or financial-solidarity measures,” Sophia Oertmann, an analyst at DZ Bank, said.

The ECB has already deployed 125 billion euros (£109 billion) to buy assets in just the past four weeks and is still struggling to bring down the borrowing costs of the bloc’s lowest-rated governments, suggesting its 1.1 trillion euro firepower could be exhausted by mid-autumn.

But expanding the scheme now would be more a signal than a necessity, and a few well-chosen words by ECB chief Christine Lagarde could prop up market confidence even without an actual decision.

The Fed also stayed put on Wednesday but left the door open to more monetary easing and it dampened expectations for a quick economic recovery from the coronavirus crisis.

Even if a big policy decision is left until later, policymakers will still have a long list of meaty topics to discuss, the most contentious of which may be whether to buy non-investment grade debt or so called “junk” bonds.

Downgraded by Fitch this week, Italian debt is barely above junk territory, raising the prospect of the bloc’s third-largest economy losing access to ECB help just when it needs it most.

The spread between Italy’s and Germany’s 10-year government bond yields stood at around 220 points early on Thursday, not far below the level seen when the ECB launched its Pandemic Emergency Purchase Programme (PEPP) in March.

Letting go of Italy’s hand would be politically unacceptable, however, and the ECB has already started to prepare the ground, first by temporarily buying Greek debt and then by accepting recently downgraded junk bonds as collateral from banks.

Its next move may be agreeing to buy bonds of so-called fallen angels, companies who have lost their investment grade rating in the crisis.

But any such move is likely to run into opposition from policymakers in the bloc’s north, who already fear that the ECB is taking on too much risk.

Policymakers may also iron out a few more details of the PEPP. The ECB releases almost no data on PEPP and has not even decided what to do with the bonds it buys when they mature.

Governors may also discuss whether to offer banks even more loans, and more cheaply, or whether to increase their exemption from its punitive deposit rate that charges them for parking excess liquidity at the central bank.

Another topic that may come up is whether to provide non-bank financial firms like insurance companies and funds with access to the ECB’s balance sheet.

While any decision on so-called shadow banks is far into the future, even a hint that they could eventually participate in ECB lending operations could be significant.

While almost any tool could be in play, interest rates are almost certain to stay unchanged as cutting a deeply negative deposit rates does little for the economy.

“There is already a strong case for the ECB to loosen its policy stance through the full range of its tools.” JPMorgan economic Greg Fuzesi said.

“Of these, the most obvious tool is additional asset purchases as it would absorb new issuance by governments, thereby limiting the amount of duration risk the market must absorb and helping to alleviate some pressure on spreads.

Thu Apr 30 , 2020
FILE PHOTO: People keep social distance as they wait to enter a supermarket amid the coronavirus disease (COVID-19) outbreak in Madrid, Spain April 14, 2020. REUTERS/Sergio Perez MADRID (Reuters) – Spain’s economy shrunk by its biggest amount on record, 5.2%, in the first quarter of this year due to the […] 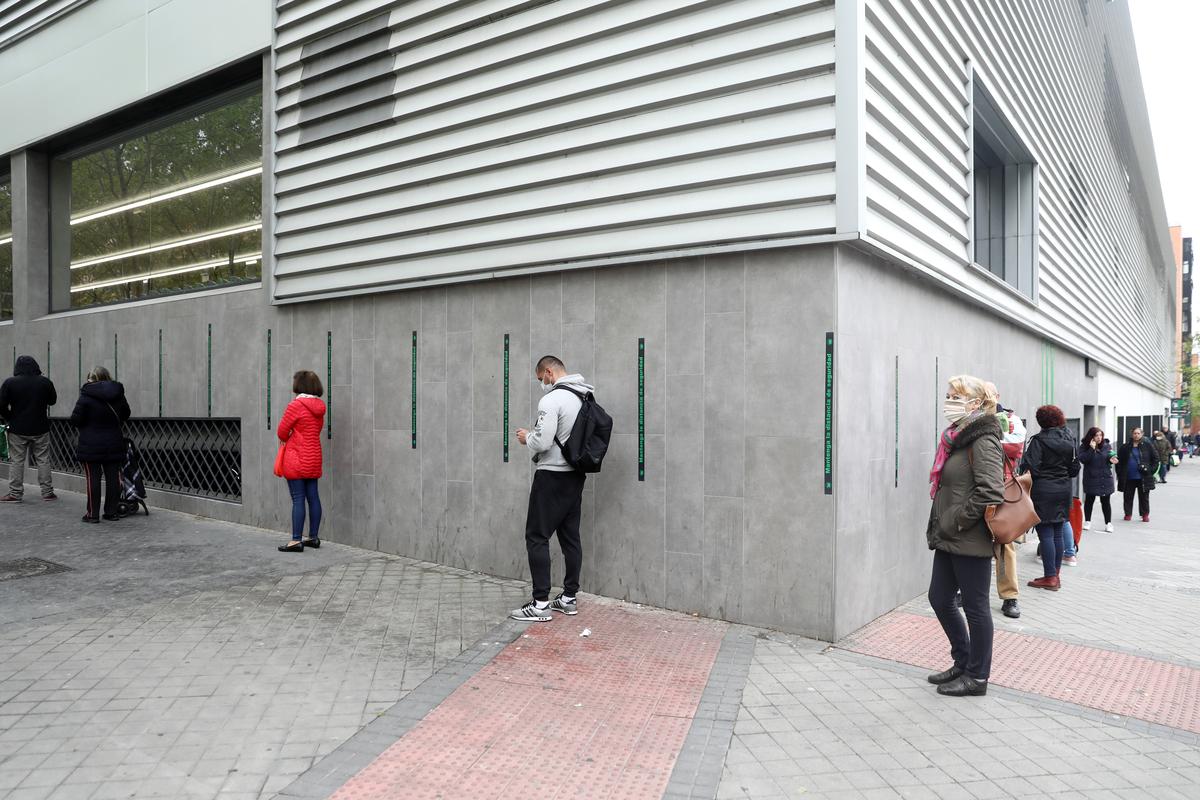