SYDNEY (Reuters) – Australia’s central bank held rates at all-time lows on Tuesday and sounded less gloomy as the economy gradually re-opens during what is likely to be the worst quarter since the Great Depression.

The Reserve Bank of Australia (RBA) left rates at 0.25% at its monthly policy meeting in a widely expected decision, and said the “accommodative approach will be maintained as long as it is required.”

In a short post-meeting statement Governor Philip Lowe said the RBA was prepared to scale up government bond purchases if needed to ensure three-year yields held around 25 basis points. AU3YT=RR

Australia’s A$2 trillion (1.09 trillion pounds) economy is experiencing its biggest contraction since the 1930s in the current quarter but “it is possible that the depth of the downturn will be less than earlier expected,” Lowe added.

A significant decline in new infections, earlier-than-expected easing of restrictions and signs that hours worked stabilised in early May auger well for a recovery.

“There has also been a pick-up in some forms of consumer spending,” Lowe added.

States and territories across Australia have been easing social distancing regulations at differing paces in recent weeks, slowly ending a partial lockdown ordered in March, having largely contained the COVID-19 pandemic.

Australia, which has about 7,200 coronavirus cases, has not reported a death from the disease for more than a week.

The country’s success in containing the virus has sent the Aussie dollar AUD=D3 soaring to five-month highs. Yet, that is leaning against monetary stimulus and won’t be welcome by the RBA.

The central bank made no mention of the exchange rate in the statement.

Highlighting the depth of the pandemic-driven global economic downturn and the fallout on Australia, many economists expect interest rates to remain at record lows for at least two more years.

Some are even predicting negative interest rates, though Lowe has ruled it out.

“While we have also become more optimistic about the outlook for the economy in recent weeks, we still expect the unemployment rate to jump to nearly 9% by Q3,” said Capital Economics analyst Marcel Thieliant.

He expects the central bank to announce an expansion of its government bond buying programme at its August policy meeting.

“And we only expect the unemployment rate to fall below 7% by 2022. That would leave it far above the RBA’s estimate of the natural rate of 4.5%, underlining that the RBA will miss its full employment mandate for years to come.”

Other data out on Tuesday showed government spending also added to growth in the March quarter, while companies reported better sales and profits than many expected.

The figures led analysts to upgrade their forecast for first-quarter gross domestic product due Wednesday with some saying the economy might not have shrunk in the quarter as previously feared.

GDP had been forecast to show output contracted 0.3%, the first fall since early 2011.

“But the likely collapse in activity in the current quarter and accompanying impact on the labour market…is a sharp and deep shock through the whole economy with likely lasting ramifications.”

Tue Jun 2 , 2020
MADRID/LOS ANGELES (Reuters) – Forget fast or slow fashion, now it’s ground to a halt. FILE PHOTO: A person is seen inside an empty shopping mall during a partial lockdown in Leverkusen, Germany, March 20, 2020, as the spread of the coronavirus disease (COVID-19) continues. REUTERS/Thilo Schmuelgen/File Photo A mountain […] 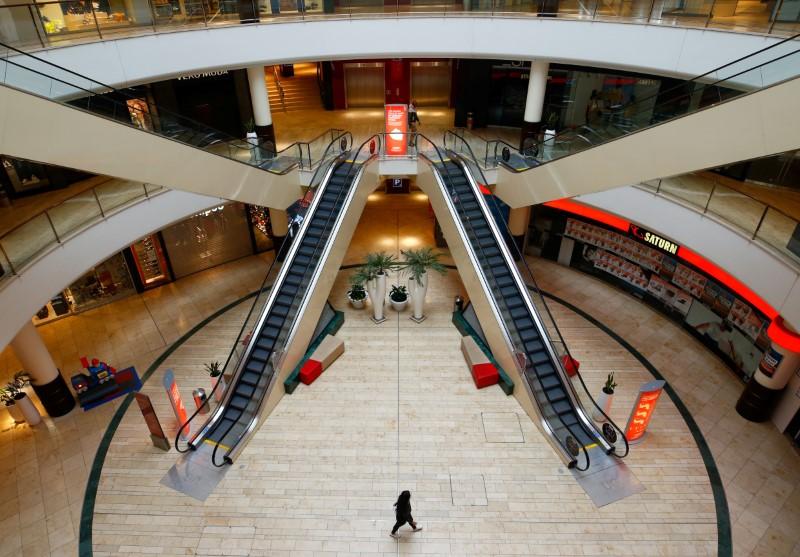