Eric Collins has a simple message for the British banks, businesses, charities and universities that have joined the rush to apologise for profiting from the African slave trade: put your money where your mouth is.

He is calling for immediate finance for black-owned companies, which receive proportionately less than their white-owned counterparts, instead of reparations for past profit from slavery.

The head of venture capital firm Impact X, set up in 2018 to invest in minority-owned businesses, Mr Collins has a £100m fund that has so far invested in 17 businesses but says other investors need to step forward. “Good intentions are not enough. Liberal values are not enough. Change things,” he said.

There are no comprehensive figures on lending to black-owned businesses in the UK because banks do not ask for ethnic background on application forms — but bankers acknowledge there is a problem with funding. “It is clear that there is still more work to do to improve diversity and inclusion”, said Stephen Pegge, managing director of Commercial Finance at UK Finance, which represents lenders.

Spurred on by the Black Lives Matters protests that have highlighted racial inequality, banks and other lenders have said they will commission research into funding for businesses owned by ethnic minorities.

“UK Finance is committed to working with our members to ensure access to finance for the diverse range of SMEs in the UK and to promote effective initiatives that address barriers and promote opportunities for ethnic minority businesses,” said Mr Pegge.

“This includes commissioning further independent analysis to better understand some of the challenges faced by business owners from BAME — black and minority ethnic — backgrounds, and what can be done to address them.”

Some data can be found in a 2013 report for the UK government by Warwick Business School, which found that black-owned businesses were more likely to be rejected for an overdraft and charged higher interest rates than their white-owned counterparts.

Monder Ram, of the Centre for Research in Ethnic Minority Entrepreneurship at Aston Business School, said around 250,000 of the UK’s 5.9m businesses were owned by ethnic minorities, and approximately 40,000 were black-owned. That is equivalent to 0.67 of the business base, although black people account for 3.3 per cent of the population.

He added that although there had been a flurry of activity to improve access to finance for black-owned businesses after the 2008 financial crisis, it had now waned.

“No one is keeping track of progress. We need to keep banks’ feet to the fire,” said Prof Ram. “Minorities feel they are less favourably treated. So they get discouraged and exclude themselves by not applying.” He added that lenders needed to seek out these entrepreneurs, provide mentoring and point them to support networks.

Mr Collins agrees. His fund invests only if start-ups have growth potential and are founded by a person who is black, female or with a disability. “We have identified 700 companies that meet our investment criteria,” he said. “There is a return to be made but investors do not see them.”

“The only way the start-up community is going to change is by swinging the door open and bringing in people that have not done fundraising in the past,” said Mr Pinto.

He believes his previous experience working for Amadeus Capital, a VC fund, has helped him raise funds. “I had a network and was an investor in tech companies. A lot of black people don’t have that. If the bar is that high to get funding then we are dead in the water,” he said.

Like many entrepreneurs, Mr Pinto has been hit by the pandemic. Pace uses machine learning to help hotel chains update prices hourly to match supply and demand but, because most hotels have been shut throughout the lockdown, the company has applied for support from the state-backed Future Fund, which provides loans to fast-growing businesses and start-ups.

Half the Future Fund’s money has gone to companies with an ethnically mixed management team, according to figures released this month.

The Treasury said it is “committed to supporting entrepreneurs and small business owners from all backgrounds”. It pointed out that since 2012 more than a fifth of loans in its Start Up Loans programme, which lends up to £25,000 to people starting new businesses, had been awarded to BAME entrepreneurs.

It also said that it was doing its best to “ensure our coronavirus support reaches those who need it the most, across all backgrounds”, adding: “This includes providing monthly reporting on the diversity of recipients of the Future Fund.”

Boris Johnson, the prime minister, has also said he will set up a commission to examine continuing inequality.

But Mr Collins is worried this could result in yet more delay. With black-owned businesses concentrated in the hospitality, property and transport sectors, which have been hit hard by coronavirus, he fears that a wave of company failures might compound the disproportionate lack of investment.

“It has not changed in a generation. No one wants to wait another generation,” he said.

Coronavirus: Lights to stay down on Broadway until next year | Ents & Arts News

Tue Jun 30 , 2020
All 41 theatres that make up New York’s performing heartland of Broadway will stay closed until next year. They have been shut since March when they closed as part of the city’s lockdown in response to the COVID-19 crisis. Now, in what could prove to be a terminal blow for […] 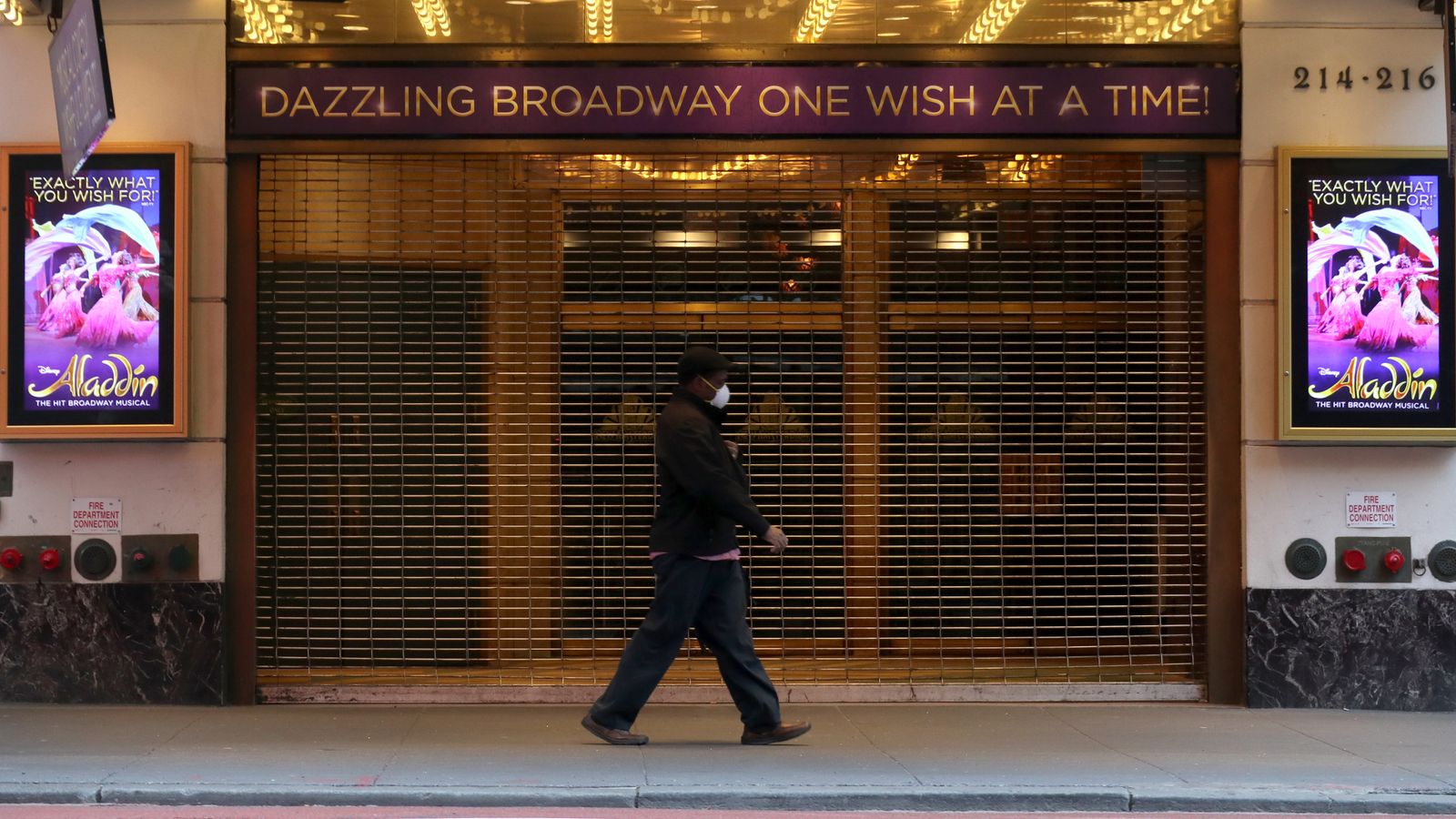