Andrew Bailey, the new Bank of England governor, was accused of producing overly rosy predictions on Thursday after the central bank said it expected a V-shaped economic recovery from the coronavirus crisis. Economists questioned the BoE’s forecast that after the worst recession in 300 years in 2020, the economy would […]

Andrew Bailey, the new Bank of England governor, was accused of producing overly rosy predictions on Thursday after the central bank said it expected a V-shaped economic recovery from the coronavirus crisis.

Economists questioned the BoE’s forecast that after the worst recession in 300 years in 2020, the economy would bounce back strongly by 2021 without sustaining any significant and persistent damage.

At a news conference, Mr Bailey was clear that the BoE monetary policy committee’s prediction of a sharp recovery was its best guess of what will happen rather than a scenario designed to make people feel happier amid the strictures of the UK lockdown. “I don’t think you’ll find we’re wildly optimistic,” he said.

But many economists disagreed, saying the authorities should expect a slower recovery than the one forecast by the BoE from the deep contraction caused by prime minister Boris Johnson’s decision to impose the lockdown on March 23 to curb the spread of Covid-19.

Krishna Guha, vice-chairman of Evercore ISI, said: “The bank’s view on the rebound ahead is unmistakably bullish — much more so than the view taken to date by the central banks of the UK’s trading partners.”

Being so far from the central banking mainstream raised questions about why the BoE thinks the downturn will be so deep — a plunge of about 30 per cent from peak to trough in 2020 — and the upswing so strong.

There is no doubt that the UK economy is in recession owing to the lockdowns at home and overseas, and BoE staff expect a 3 per cent decline in gross domestic product in the first quarter to be followed by a 25 per cent drop in the second.

This was more optimistic than the Office for Budget Responsibility, the UK fiscal watchdog, which said last month that it expected a 35 per cent plunge in GDP in the second quarter, but Mr Bailey stressed the differences were not material.

Payments data, said the BoE, suggested household consumption had dropped 30 per cent since the lockdown was introduced.

Steven Bell, economist at BMO Global Asset Management, said the BoE was likely to be right about its assessment of the downturn. “Forecasters are underestimating the depth of the recession in the UK and across the developed world,” he added.

But it was the speed of the upturn predicted by the BoE — with all of the contraction eliminated in the second half of 2021 and unemployment dropping from 9 per cent in 2020 to below 4 per cent by 2023 — that economists thought was too optimistic.

The MPC did say the risks to its forecast were on the downside, but economists thought it was Panglossian and accused the BoE of understating the likely scale of bankruptcies and unemployment.

Jagjit Chadha, director of the National Institute of Economic and Social Research, a think-tank, pointed out that even with the BoE’s optimistic scenario, there would be persistent damage to the economy.

He added that after an initial surge when the lockdown was lifted, the economy would not rapidly get back to its 2019 level of output. “[The BoE’s forecast] is more optimistic than even our ‘reassuring’ scenario,” he said.

Kallum Pickering, economist at Berenberg, said the BoE forecast was “probably too optimistic”, partly because it assumed a smooth path to a trade deal with the EU and also because of what he expects to be “excess precautionary saving” by households.

With most economists expecting a slower recovery than the BoE and for that to become clearer in the weeks ahead, they expect MPC members to vote for further quantitative easing at their June meeting.

Since it initiated a £200bn QE programme in March to buy up existing government bonds, the BoE has successfully halted a run on sterling and flight from the gilts market. This initiative has enabled ministers to secure vast amounts of new borrowing to finance large scale assistance for companies and households in the crisis.

At current rates of gilts purchases, the QE programme will run out in mid-July and the MPC would then face a choice between continuing to buy government bonds, keeping long term interest rates at current historic lows, or watching to see where the cost of borrowing would settle if the private sector had to take a larger share of the total stock of state debt.

Fabrice Montagne, economist at Barclays, said: “We see the bank as an enabler of the government’s fiscal response to the crisis . . . We will learn as the data comes in and evidence of longer term scarring should justify further easing.”

Mr Bailey is keen not to be seen as directly financing the government by creating money for that purpose and he highlighted on Thursday how ministers had not used the BoE’s special ways and means account that lies at the state’s disposal to pay for crisis measures.

But he would not rule out further drastic action, stressing it was right to co-ordinate closely with the government over the response to the crisis. “I don’t think we’re out of [monetary policy] tools,” he said.

The Bank of England said on Thursday the core of the banking system had sufficient resilience to be part of the solution to the coronavirus crisis.

In a first for the central bank, the BoE published a financial stability report alongside its monetary policy statement and judged that “the core banking system has capital buffers more than sufficient to absorb losses” during the pandemic.

“Supported by government guarantees for new lending and BoE funding, [the banking system has] the capacity to provide credit to support the UK economy,” it added.

Andrew Bailey, BoE governor, said banks would make losses — owing to companies and households defaulting on loans amid the crisis — but they were manageable if the economy followed the path in the central bank’s latest forecast about the impact of Covid-19 and the lockdown.

He highlighted how these losses would be lower than those contained in BoE stress tests of banks last year, which covered a severe recession scenario.

“At £80bn, the losses banks could face in the test based on the monetary policy report scenario [about the virus crisis] are materially lower than the £120bn of losses banks were able to withstand in the 2019 stress test,” said Mr Bailey.

Mr Bailey highlighted the need for banks to keep lending, saying any restrictions on credit would, under the BoE’s forecast, push unemployment up 2 percentage points to 11 per cent this year and leave financial institutions with even larger losses.

The BoE financial stability report said the banking system had responded well after the run on sterling and flight from gilts in March, but Britain faced risks that these stresses could emerge again.

A bigger immediate risk was the cash flow difficulties facing UK companies after their sales fell precipitously amid the pandemic.

The BoE said companies were likely to have to plan for a cash flow hit of £110bn on a combined basis, of which £50bn would be covered by the government’s job retention scheme and other support measures.

About £20bn of the remaining £60bn of lost cash flow had already been met by government-supported loan schemes, said Jon Cunliffe, deputy BoE governor for financial stability. He expressed confidence that banks were ready to cover the rest of the gap.

If there was another lockdown following a second virus outbreak, Mr Bailey said “[the BoE] would have to react to that as best we can”.

Thu May 7 , 2020
Brussels has drawn up plans to determine which goods entering Northern Ireland should face EU import duties as it seeks to pressure Britain into fully applying the Irish Sea customs border that Boris Johnson agreed to last year as part of his Brexit deal.  The European Commission has proposed a […] 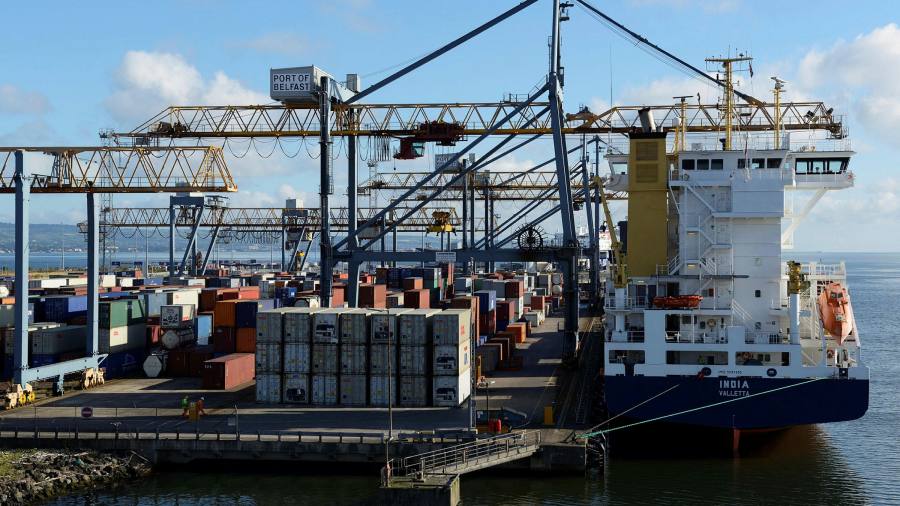