Boris Johnson has been warned that he is putting blue-collar workers in harm’s way as he scrambles to get manufacturing and construction employees back to work on Wednesday.

The UK prime minister was criticised by Labour and union leaders for attempting to bounce people back to work without allowing time to establish arrangements for safe workplaces and new guidelines for public transport.

Downing Street initially wanted people who could not work at home to return to work on Monday but on a day of confusion it had to postpone the start date by 48 hours amid warnings from Frances O’Grady, general secretary of the Trades Union Congress, that it would lead to “chaos”.

In an attempt to get factories and construction sites increasing production, business secretary Alok Sharma on Monday published long-awaited papers on how to make workplaces safer.

The fresh guidance for eight sectors on how to operate during the coronavirus crisis said most workers did not need any additional protective equipment.

Instead it advised that the risk should be managed through social distancing, hygiene and fixed teams or partnering instead — reserving most face masks for key workers such as health professionals.

Some bosses were privately relieved because they had expected to be told to invest in costly protective equipment.

But Rehana Azam, national secretary of the GMB industrial union, said: “If this is the government’s detailed strategy for getting the economy moving again we should all be very worried.

“While frontline workers are crying out for PPE their big idea is for people to make home-made face masks.”

The TUC acknowledged that there was a PPE shortage but said: “It’s crucial that where risk assessments identify the need for PPE it is provided.”

Stephen Phipson, chief executive of Make UK, the manufacturers’ group, said many employers would source PPE equipment for their workforces.

“It is clear that PPE is going to be a key issue and, despite the guidance being advisory and not mandatory, it’s absolutely essential that manufacturers of all sizes go the extra mile to provide their employees with every piece of equipment which could protect them.”

The row came as new analysis by the Office for National Statistics showed that men working in some blue-collar roles were more than twice as likely to have died with coronavirus as those of the same age and sex in the general population.

Ed Miliband, shadow business secretary, called for greater protections for manual workers. “Workers in manufacturing and construction are being told to go out to work while those in the highest-paid professions are far more likely to be able to work from home,” he said. “It’s incumbent on government to provide the highest safety standards for those workers.”

Ministers have ordered every company in the UK with more than five staff to draw up a Covid-19 risk assessment for their workplace to provide the best protection against infection.

But the government has resisted calls from the TUC for those documents to be made publicly available. Instead, bosses have been asked to “consider” publishing just the headline results of the assessments on their own websites.

Meanwhile, employers have been told to instigate various measures such as floor tape and an end to car-shares and face-to-face meetings. Adam Marshall, director-general of the British Chambers of Commerce, said the guidance signalled “big changes for the way that many businesses operate”.

The ONS found the highest mortality rate among men working as security guards, with bus and taxi drivers, chefs and retail staff also among those more affected.

“These figures demonstrate that the government is failing on workplace safety — with horrific consequences for our lowest-paid and most precarious workers,” said Ms O’Grady of the TUC.

The guidelines have raised fears over legal action by staff against their employees if they contract coronavirus at work. However, business leaders also say that the new rules are mostly in line with existing health and safety guidance anyway.

Meanwhile Rishi Sunak, chancellor, is set to extend the flagship job retention scheme beyond its scheduled expiry at the end of June, in a sign that the economy will be very fragile for months to come.

Business leaders expect Mr Sunak to extend the scheme until September with a tapering of state job subsidies; currently the Treasury pays 80 per cent of the salary of furloughed staff up to £2,500 a month.

The chancellor has considered stepping down the level of payments in the furlough scheme, with employers being asked to make up the extra wages so that workers would not see any loss of income.

This would mean that companies would be less likely to abuse the system given they would need to use their own money to cover furloughed employees, one person said, and encourage them to bring workers back.

Mon May 11 , 2020
Boris Johnson’s cabinet is divided over imposing a 14-day quarantine on most people arriving in the UK, with some ministers concerned the plans have not been fully thought through and would further damage the economy. The government gave further details of the proposed quarantine rules on Monday as part of […] 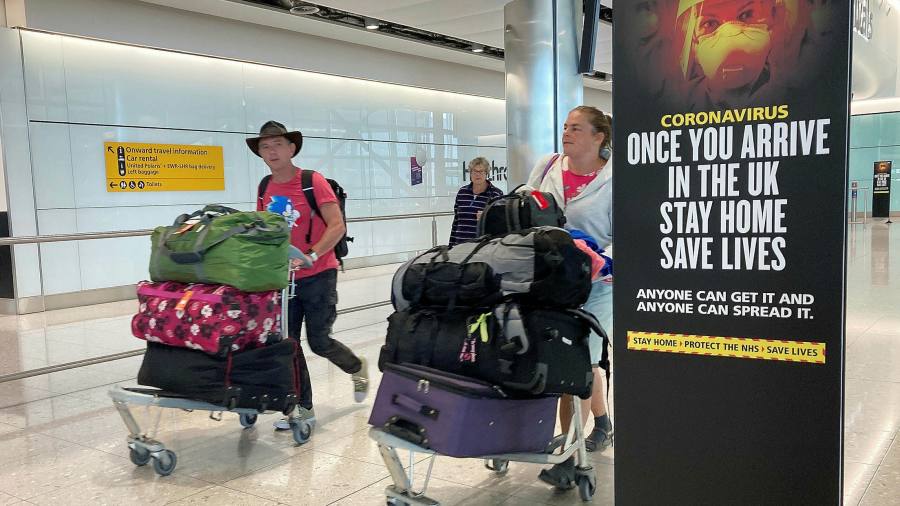