Boris Johnson repeatedly refused on Monday to say whether a £12bn national insurance hike would go ahead as planned in April, as pressure mounted on him from within his own party to put it on hold.

Conservative rightwingers and some ministers have urged the UK prime minister, who is fighting for his political life over the Downing Street party scandal, to shelve the tax rise to alleviate the cost of living crisis.

Rishi Sunak, chancellor, has argued the tax rise must go ahead to fund permanent reforms to the NHS and social care. Downing Street on Monday also insisted the 1.25 percentage point rise in national insurance rates — paid by employees and employers — would go ahead as planned.

But Johnson seemed more cautious. Asked eight times in a television interview whether it would go ahead in April, he dodged the question. “Listen to what I’m saying — we’ve got to put that money in, that investment in our NHS,” he replied.

The chancellor and Johnson are trying to finalise a package of measures to tackle a household income crunch in April, when the planned NI rise coincides with a 50 per cent jump in energy bills when the price cap, which covers the majority of households, is set to rise from £1,277 to £2,000 a year per household.

Sunak has drawn up a “long list” of options, according to people briefed on the discussions, but Johnson has been too distracted by his fight for political survival to focus on the issue.

The aim is to come up with a plan by the end of next week and certainly before February 7, when Ofgem announces the new energy cap. The cap is set twice yearly by the energy regulator.

The plan is expected to include targeted help for vulnerable households, possibly through an expanded Warm Homes Discount scheme, accompanied by a “universal” plan to help all homes. 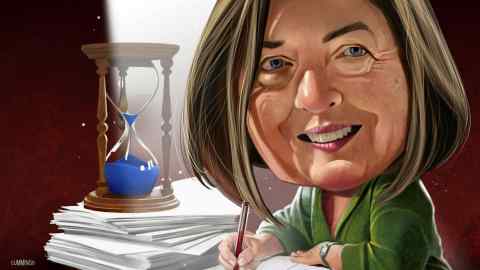 Downing Street has not excluded a cut in the 5 per cent VAT rate to zero, but ministers are also looking at a mechanism to spread the cost of this year’s energy spike over a number of years.

The national insurance rise has become bound up in tensions over the Tory leadership, with Johnson being urged to reduce the tax burden, which is heading for its highest level in 70 years.

Jacob Rees-Mogg, leader of the House of Commons, called for the tax to be paused this month, while critics of Johnson on the right of the party weighed in on Monday.

David Davis, the former Brexit secretary who urged Johnson to quit last week, said the tax rise would hit “those people who voted for us to avoid tax rises by Jeremy Corbyn”.

Meanwhile former Treasury minister Robert Jenrick told the FT that postponing the increase would alleviate pressure on household incomes. He said NI “penalises those taking on more hours or getting promoted”.

During months of tense negotiations last year, Sunak insisted that if Johnson wanted to spend more on the NHS and social care he would have to pay for it through higher taxes, not more borrowing.

Sunak’s aides said reports that the chancellor was now referring to the NI rise as “the PM’s tax” in private meetings with Tory MPs were “rubbish”. One cabinet minister claimed it was “the chancellor’s idea”.

One Sunak ally said: “You can’t borrow for this stuff. There is no discussion we are involved in any delay.”

Tue Jan 25 , 2022
The latest increase in the UK state pension age has led to record highs in employment among 65-year-olds, while also prompting those living in poorer areas to work for longer. Research by the Institute for Fiscal Studies, published on Tuesday, found that around 55,000 more 65-year-olds were in paid work […]