Boris Johnson will need to deploy a judicious mixture of carrots and sticks if he is to fulfil his pledge to end the longstanding British snobbery towards technical education, and fix the UK’s skills shortages, according to experts. The prime minister, himself a product of Eton College and the University […]

Boris Johnson will need to deploy a judicious mixture of carrots and sticks if he is to fulfil his pledge to end the longstanding British snobbery towards technical education, and fix the UK’s skills shortages, according to experts.

The prime minister, himself a product of Eton College and the University of Oxford, said last month in a speech launching the government’s new skills agenda that it was time to end the “pointless, snooty, and frankly vacuous” distinction between academic and technical education in England.

But experts warned it would take a combination of ambitious reforms and financial incentives to engineer a lasting shift in attitudes among 18-year-olds away from traditional three-year university degrees that have been their overwhelming preference in recent decades.

With 1m more job losses forecast by the end of the year because of the coronavirus crisis, the CBI employers’ organisation is urging more government support in retraining those being made redundant as ministers also look to revive adult learning.

Chris Husbands, vice-chancellor at Sheffield Hallam University, said the evidence of the past 50 years consistently showed that young people preferred to gamble that a three-year degree would bring them better long-term prospects than a technical course at a further education college.

“The question now is whether the government can change the terms of trade enough in order to change the patterns of young people’s choices,” Sir Chris said. “That will depend on the sticks and carrots they put into incentives.”

Among the possible “sticks” could be requiring minimum A-level grades to go to university, and creating differential terms for student loan repayments to encourage choices away from university courses the government considers less productive.

The 2019 Conservative party manifesto warned of too many “low-quality” courses that do not lead to graduate-level jobs, with government estimates showing 45 per cent of the value of student loans will not be repaid.

Many of the ideas being discussed in Whitehall were part of a review by businessman Philip Augar into post-18 education, which identified a bias in funding towards degree courses over technical ones.

A person familiar with the government’s internal deliberations noted Mr Johnson’s speech had spoken of “radical change” and that Mr Augar’s review — which looked to have been sidelined under Theresa May’s government — was now “very much live”.

“At the moment there is nothing to stop every single person in the country enrolling on a degree course,” added this person. “The question is how to encourage those who might have gone to university and borrowed the maximum amount to do something local and cheaper.” 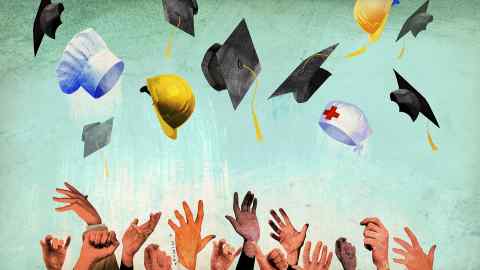 Further education colleges have welcomed the government’s new drive towards technical courses, which includes fast-tracking £200m to refurbish buildings this year, but warned that it will still require a huge marketing campaign to change young people’s attitudes.

John Laramy, chief executive of Exeter College, said the government’s decision to make a select list of further education courses eligible for student loans would not, in itself, change negative British attitudes that were not seen in the US or Germany.

“Funding is not the biggest barrier — it’s that not enough young people are aware that you can get to the same place without going off to do a three-year degree,” he added.

“A 20-year-old bricklayer can earn more than a trainee solicitor after a three-year degree. That isn’t a statistic you see enough on a marketing campaign.”

The government is also committed to developing adult learning, which has since 2012 shrunk by 42 per cent for people aged over 30, according to data from the Higher Education Statistics Agency.

Among the plans is a life-long loan entitlement to four years of post-18 education to which adults can dip in and out during their working lives.

Experts have welcomed the move, but warned that it will require both flexibility on courses and financial support to encourage adults to go back into education, particularly in the uncertain financial climate.

“We can’t continue with a system that says ‘Because I was good at writing essays at 21, I’m qualified to do whatever jobs comes up during my 50-year career’, but we do need a bigger vision than just making universities and further education colleges fight over the same pile of cash,” said James Kirkup, director of the Social Market Foundation, a think-tank.

Jo Johnson, former universities minister, said reforms would be needed to make the education system more flexible, including making it easier for students to transfer course credits between institutions and ending the current block that stops students returning to study at the same or lower level as a previous qualification.

“The priority must be to increase flexibility in the system and enable students to do a . . . technical qualification if that’s right for them, rather than a one-size-fits-all bachelor programme,” he added.

Whitehall insiders said Mr Johnson’s speech should be seen as an important signal of government ambitions, but that the detailed outcomes were still being discussed and would partly depend on the Treasury’s comprehensive spending review that sets departmental budgets.

Sir Chris, who has been a vocal supporter of vocational training, said that financing the government’s ambitions would be key.

“If this is a tight financial settlement [it] will be very difficult for the Department for Education to make good on the commitments,” he added.

Mon Oct 12 , 2020
US dollar and Chinese yuan arranged for a photograph on September 7, 2017. studioEAST | Getty Images The dollar inched up in early Monday trade as riskier currencies slipped after negotiation on a U.S. stimulus package ran into resistance and as the yuan dropped after China’s central bank took a […]