An offshore oil platform is seen with a tanker in the distance on April 20, 2020 in Huntington Beach, California.

Oil rose on Wednesday, with Brent at $40 for the first time since March, as optimism mounted that major producers will extend production cuts and a recovery from the coronavirus pandemic will spur fuel demand.

Both benchmarks have risen sharply in recent weeks from the lows of April, buoyed by a continuing recovery in China, the epicenter of the virus outbreak, while other economies are slowly opening up after lockdowns to contain its spread.

The Organization of the Petroleum Exporting Countries (OPEC) and other major producers including Russia, a group known as OPEC+, may extend production cuts of 9.7 million barrels per day (bpd), or about 10% of global output, into July or August, sources told Reuters.

The cuts are currently due to run through May and June, scaling back to a reduction of 7.7 million bpd from July to December, but Saudi Arabia has been pushing to keep the deeper cuts in place for longer.

“Even deeper cuts will speed up the process of rebalancing the market,” ING Economics said, noting the “market was already set to transition from surplus to deficit as we move into the second half of this year.”

With the date of the meeting not yet set and some calling for it to be early as this week, much remains up in the air, however.

But the demand picture is looking brighter as economies including China, the world’s second-biggest oil consumer, start to recover from the pandemic.

“As virus-related lockdown measures continue to be lifted, we expect that demand will gradually recover,” Capital Economics said in a note, estimating that global oil consumption will fall to just under 92 million bpd on average in 2020.

This compared with 100.2 million bpd in 2019, it said, before the pandemic swept through Europe and the United States, evaporating demand for everything from flying to trips to the dentist.

U.S. crude oil inventories fell by 483,000 barrels in the week to May 29, the American Petroleum Institute said on Tuesday. Gasoline and distillate fuel stockpiles rose.

Official government inventory data will be released later on Wednesday.

Those figures still show U.S. stockpiles remain high and are forecast to have risen for a second week in a row.

Wed Jun 3 , 2020
TOKYO/NEW YORK (Reuters) – Asian shares vaulted to a near three-month high on Wednesday as hopes of more stimulus and further easing in social restrictions around the world outweighed caution over a host of worries from the coronavirus to growing U.S. civil unrest. FILE PHOTO: A pedestrian wearing a face […] 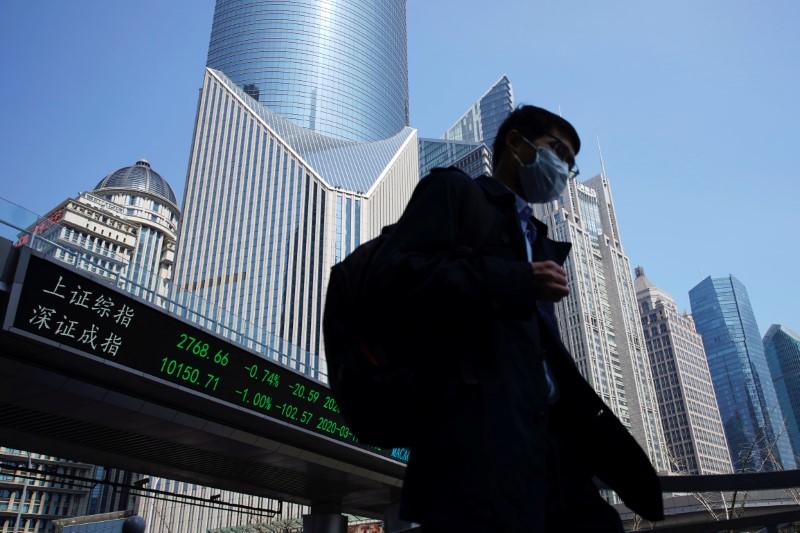