More than 20 of the UK’s largest business, education and tourism bodies have urged the government to relax the strict quarantine rules, calling for “travel corridors” with low-risk countries and health screening for visitors to Britain. In a joint letter to Priti Patel, the home secretary, Dominic Raab, foreign secretary, […]

More than 20 of the UK’s largest business, education and tourism bodies have urged the government to relax the strict quarantine rules, calling for “travel corridors” with low-risk countries and health screening for visitors to Britain.

In a joint letter to Priti Patel, the home secretary, Dominic Raab, foreign secretary, and Grant Shapps, the transport secretary, the groups said it will be “vital we start to open the UK up to our trading partners” to help recover from the economic shock of Covid-19.

The letter, signed by the employers groups London First, the CBI, Federation of Small Businesses and the British Chambers of Commerce, warns of the impact on education, aviation, manufacturing and tourism from the quarantine, which came into force on Monday, requiring most arrivals to the UK to self-isolate for two weeks.

Other critics, including large numbers of Tory MPs, have argued that such controls should have been introduced months ago at the height of the pandemic, then eased as the health risk subsided. Mr Shapps and Alok Sharma, business secretary, have both privately argued against the policy, according to Whitehall sources.

But the quarantine is being pushed hard by Dominic Cummings, the most senior political adviser in Downing Street, and has the backing of Ms Patel.

The letter, also signed by ADS, which represents the aerospace, defence, security and space industries, Association of Labour Providers, English UK, Tourism Alliance, UK Hospitality and Universities UK, said that over 1.5m jobs across the UK are supported by air transport and more than 40 per cent of trade with non-EU countries travels by plane.

“There are whole sectors of the UK economy — from SMEs to large employers — that simply won’t recover and thrive without international connections,” it said.

Manufacturers need air connections to export goods, the letter added, while universities rely on £5bn a year from international students.

The groups requested “as soon as possible” a plan that includes a framework for establishing travel corridors between the UK and low-risk countries to enable exemptions from the quarantine rules.

“The indefinite and indiscriminate advice not to travel overseas prevents businesses and individuals from being able to plan with confidence. Government advice should recognise that whilst Covid-19 has struck every corner of the world, it has not struck evenly,” the letter added.

The groups also want health screening for arrivals into the UK to help control the virus over the coming months, which they said could lead to controlled lifting of restrictions on movement.

At the moment the only exemptions are those travelling from Ireland, the Isle of Man and the Channel Islands or those in about 40 specialised professions ranging from seasonal fruit-pickers to nuclear inspectors.

Airlines, which are pursuing a legal action against the policy, have argued that the quarantine makes no sense when the UK has a higher infection rate than most other countries.

They are pushing for the UK to agree air bridges to allow zero quarantine with other countries with low rates of Covid-19 — and hope this can be achieved ahead of the crucial August holiday season.

Quash Quarantine, a group of tourism companies which had threatened its own legal action, dropped the ultimatum on Tuesday claiming that ministers had privately pledged to try to set up new “air bridges” by the end of the month. The government denied that it had any specific target.

“As we have discussed many times before, we have future options which include air bridges . . . it’s ongoing . . . that does include conversations with industry on how the concept might work,” a Downing Street spokesman said.

Kelly Tolhurst, aviation minister, said in a written statement that the government was “carefully considering” the concept of international travel corridors. “Ultimately, we will be guided by the science, and the health of the public will always come first,” she said.

Johnson under fire over lockdown timing

Wed Jun 10 , 2020
Boris Johnson is facing renewed criticism of the government’s handling of the coronavirus pandemic after a former leading scientific adviser claimed Britain’s death toll could have been halved if lockdown had started a week earlier. Britain’s official death toll now stands at 41,128, while the total number of excess deaths […] 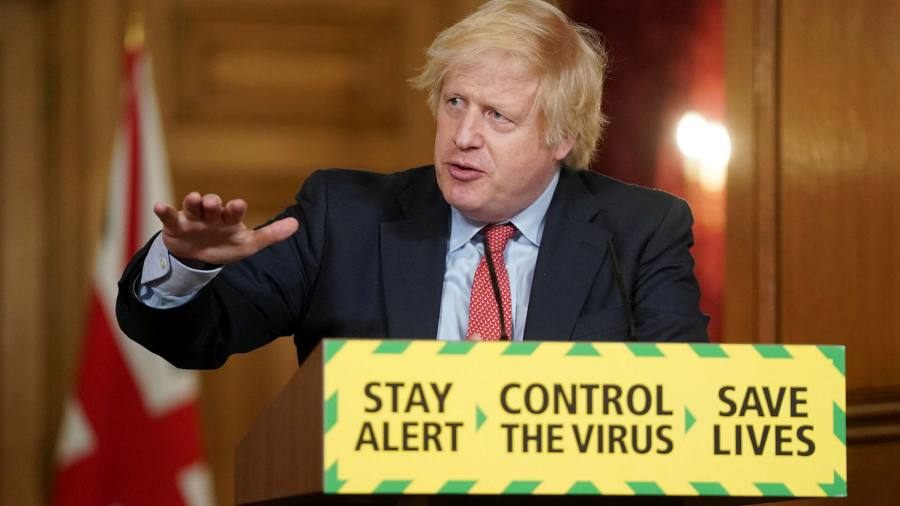