A £2bn government fund to create work for young people in the UK at risk of long-term unemployment is set to launch this week, but businesses question whether it will deliver on its goals as they brace for an autumn wave of job losses.

The Kickstart scheme, modelled on a programme that ran after the 2008 recession, is one of the central elements of chancellor Rishi Sunak’s “Plan for Jobs” set out at the start of July to mitigate the economic fallout from the coronavirus pandemic.

It will pay employers to create six-month work placements for 16-to-24-year-old benefit claimants, covering overheads and wages — of at least the statutory minimum — for at least 25 hours a week.

With the jobs market considered to be one of the most challenging for new entrants in decades, the scheme was initially welcomed by both business groups and unions even though other parts of Mr Sunak’s plan — notably the £1,000 bonus to be paid to companies who retain furloughed employees — have been criticised as costly and likely to prove ineffective.

But the rollout of the Kickstart scheme is already behind schedule. Mr Sunak said last month that it would be open to applications in August. The government is set to publish details of how the scheme will work this week, and is likely to name several large companies that have agreed to participate — including retailer Tesco, which said last week it planned to offer 1,000 placements.

However, people in discussions with the Department for Work and Pensions said they did not expect the first round of applications to close until late September. “That does point to a bit of slippage,” said one business source, adding it would “make it a stretch” to get jobs started during the autumn.

The delay reflects the difficulty of scaling up the scheme at speed — without subsidising companies to hire already-employable young people to fill jobs they would have created anyway.

The Future Jobs Fund on which Kickstart is modelled, which ran from 2009 to 2011, was open only to young people who had been claiming benefits for at least six months. Most of the roles were created by local authorities and charities, which had to prove they carried a community benefit. It funded just over 105,000 jobs at a cost of about £680m.

But Mr Sunak wants to cast the net much wider: he has urged “every employer, big and small, national or local, to hire as many Kickstarters as possible”, and said the initial allocation of £2bn was enough to fund hundreds of thousands of jobs.

Employers who put in bids will need to prove that the jobs are of good quality, carry opportunities for progression, and would not have existed without the subsidy. To make the process manageable, they will have to either offer a minimum of 30 places, or go through a local intermediary — such as a chamber of commerce or community organisation — who can co-ordinate bids from small businesses.

But the scale of the scheme implies a much less restrictive approach than previously in deciding which jobs, and which young people, are eligible for funding. This carries risks, when channelling public money to large companies that could be making redundancies elsewhere, or taking on Kickstarters in place of temporary or zero hour workers.

“How do you know that an employer has created an additional job that wasn’t someone else’s job before?” said Tracy Fishwick, managing director of Transform Lives, a social enterprise based in Liverpool that aims to act as an intermediary for small businesses offering placements.

She argued it was often clearer that small businesses, which hire very rarely, were creating an additional role, and that they were also more likely to retain young people once the six-month placement ends. 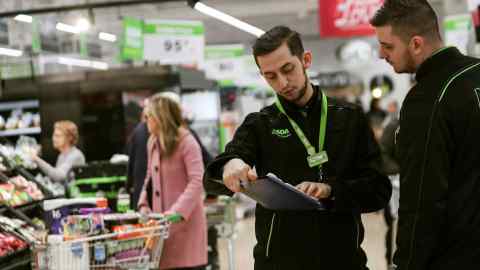 Meanwhile, larger companies are both alive to the reputational risks of accepting public money, and wary of taking on large numbers of young people who may need significant additional support.

The funding, about £6,500 for a 24-year old, will cover wages but may not be enough to cover the costs of supervision, mentoring and moving Kickstarters into more permanent roles.

Young people will be referred into the scheme by work coaches in jobcentres, who will focus on those least likely to find a job on the open market, at a time when many highly employable candidates will be jostling for a limited number of roles.

“The real disappointment risk is employers who agree to create jobs in good faith and find it’s hard to do for disadvantaged young people who may not be job ready,” said one person involved in the design of the scheme, adding that this might tempt officials to refer people who were much more job ready to keep employers on board.

“How to open up opportunities for young people for a six-month period in the current environment is quite an ask,” said Lizzie Crowley, senior policy adviser at the CIPD body for HR professionals.

If the only reason you’re doing it is because the scheme exists, then it won’t be a sustainable job

Sharon Walpole, director of Careermap, a careers site for school leavers and graduates, said many large employers were interested in Kickstart as a way to bring young people into entry level jobs, but would take their time to work out which of the various government incentives on offer — with subsidies also available for hiring apprentices and trainees — would best meet their needs. “We won’t see a huge rush of employers,” she said.

“Additionality is the key thing, it has to be a job that won’t be there otherwise. Of course that makes sense, but if you set the bar too high . . . If the only reason you’re doing it is because the scheme exists, then it won’t be a sustainable job,” said a senior business figure.

He added that while Kickstart was “a chunky intervention”, it would not make up for the jobs likely to be lost when the furlough scheme expires in October. “It will be positive but when the job retention scheme is removed then Kickstart is going to be the only game in town propping up the jobs market”.