Business associations reacted angrily on Tuesday after a government minister in charge of Brexit border preparations accused them of taking a “head in the sand approach” to the coming border frictions with the EU.

Theodore Agnew, a minister working on preparations for Brexit at the Treasury and Cabinet Office, told MPs that business needed to be “more energetic” in preparing for the UK’s departure from the EU single market and customs union in just 80 days’ time.

“Ultimately, the government can only do so much,” he said. “If businesses haven’t engaged in the process and understood the processes from 1 January, that has to be their responsibility.”

The minister’s blunt warning drew an indignant response from business groups that have repeatedly demanded clarity and urgency from the government on new border processes and IT systems, many of which are still not in place.

“A ‘head in the sand approach by traders’? That’ll go down well,” said Tim Rycroft, chief operating officer of the Food and Drink Federation, in a sarcastic response posted on Twitter. Food and drink is one of the industries most exposed to the coming changes.

Stewart Wood, a Labour peer who sits on the Lords’ EU committee, said Lord Agnew had provided a “spectacularly unfair characterisation” of business preparations, noting that many had been “pleading for guidance, clarity and timelines for months”.

Alex Chisholm, permanent secretary of the Cabinet Office, told MPs last week that about one-third of businesses still believed there would be an extension to the transition period, deepening fears of a lack of preparedness in the business world.

Lord Agnew also drew fire from the Road Haulage Association after saying he was more interested in talking to groups that were more “integrally involved” in cross-border trade, rather than the haulage group, which has highlighted the government’s shortcomings in the past.

Richard Burnett. the RHA’s chief executive, replied on Twitter: “It’s clear Lord Agnew doesn’t understand how the logistics industry works and that hauliers will have to provide the full service of customs declarations as well due to the shortage of agents. Of course he can leave us out and ignore us, but at his peril.”

HM Revenue & Customs has estimated that up to 260m new customs declarations will be completed per year at a cost of £15bn, with industry estimating that up to 50,000 new customs agents will be required to help industry deal with the coming red tape.

Lord Agnew said he believed trade groups such as Logistics UK, the freight transport lobby, and the British International Freight Association (Bifa) were “less worried” about a shortage of customs agents than a few months ago because of growing use of technology.

Elizabeth de Jong, policy director at Logistics UK, said the group had been “proactively urging its members to make sure that they and their customers prepare as much as possible for the new trading conditions” after January 1.

Last month, a survey of Bifa members found that two-thirds of customs brokers said they would not have enough staff to handle the extra paperwork. The survey was sent to Lord Agnew to highlight their concerns.

“The gentleman has selective hearing,” added an industry insider who has been involved in consultations with the government on the future border.

Along with Lord Agnew’s attempt to “wake up” business to the urgency of the coming changes, the government announced on Tuesday that it had signed a £77.6m contract with ferry operators to ensure critical goods, including medical supplies, would reach the UK even in a “no deal” outcome.

The government has warned that queues of up to 7,000 trucks could form at Dover in a “reasonable worst-case scenario”, but said the contracts would cover up to 3,000 trucks a week into other ports, such as Harwich and Hull.

Transport secretary Grant Shapps said the six-month contracts with Brittany Ferries, DFDS, P&O and Stena would ensure critical goods would reach the UK “irrespective of the outcome of the negotiations”.

Tue Oct 13 , 2020
Germany warned of the serious economic damage that would stem from a no-deal outcome to the EU-UK trade talks as it called for rapid progress in the limited window of time left to negotiators.  Michael Roth, Minister of State for Europe, cautioned on Tuesday that there had been no real […] 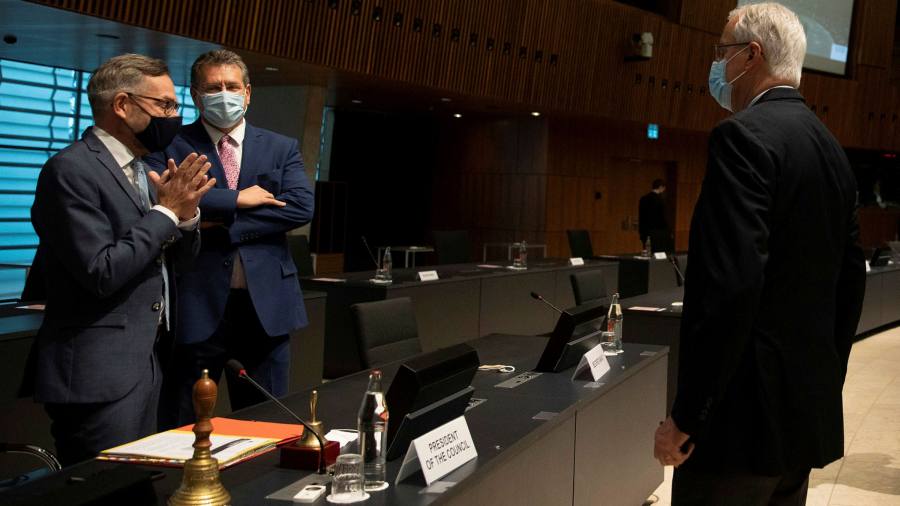