LONDON (Reuters) – London’s Canary Wharf is ready to get the bankers, traders and accountants who shuffle trillions of dollars a day from its gleaming Manhattan-style skyscrapers back to work with social distancing, limits on elevator use and staggered working hours.

One of the world’s most powerful financial citadels, Canary Wharf has negotiated plans with its tenants to bring back up to half of the 125,000 people who usually work in the area while adhering to government advice on tackling the coronavirus.

Measures will include intense deep cleaning focusing on the points that people touch such as handles and buttons, one-way walking routes and entrances, and additional transport options.

“We expect quite a few businesses to bring in up to 10% of their staff in this week – that is 12,500 people back to work,” Howard Dawber, managing director of strategy at Canary Wharf, told Reuters.

“That is quite a lot of people to manage but we can, right up into people’s offices, enforce that social distancing 2-metre rule.”

Other measures include changing desk layouts to have “checkerboard” patterns, sensor operated doors and dedicated staff to enforce social distancing on lifts – including pressing the button.

It was built in the 1980s and 1990s in East London, on the derelict ruins of what was once the world’s largest port which processed the imports of an empire including bananas from the Canary Islands. It is home to financial groups including J.P.Morgan, Morgan Stanley, Barclays, Citi, Credit Suisse, Deutsche Bank, HSBC and Refinitv.

Along with the ancient City of London, it is the jewel in the crown of Britain’s financial hub – which vies with New York for the title of the world’s financial capital.

London is by far the world’s biggest hub for foreign exchange trading, home to more international banks than any other city, and the largest centre for trading interest rate swaps.

Even at the peak of the outbreak, Canary Wharf hosted a skeleton staff totalling about 3,500.

The UK government announced a slight easing of its seven-week lockdown this week, telling people in England they should try to return to work if they could not work from home.

But it unclear how much of the economy got back to work. Most white-collar workers are still at home and it is unclear when, if ever, some companies will return fully to office-based operations.

“When people are ready, we are ready and we have created a safe environment at Canary Wharf – it wasn’t easy but we have made it as safe as possible,” said Dawber.

“All the measures are aimed at minimising the risks as far as is possible … though obviously you cannot ensure it will never happen,” he said.

Transport, though, is a potential problem.

Before the novel coronavirus outbreak, queues outside Canary Wharf underground tube station were a common sight as the station was full to capacity with people waiting for trains.

Canary Wharf has put on extra parking spaces and provided more bicycle racks and river buses will increase their frequency, increasing their capacity to up to 5,000 people an hour at peak times.

“It will be a slow process of returning back to work. We are very comfortable with up to about half of the full number working on the Wharf – which is about 60,000,” Dawber said.

“We could cope with up to 60,000 right now while maintaining social distancing rules,” he said. “We are talking to tenants about actively staggering start times so we don’t get everybody turning up at eight o’clock.”

U.S. companies discover the dark side of a COVID-19 business boom

Fri May 15 , 2020
(Reuters) – Kevin Kelly has discovered the many ways a deadly pandemic can be both a boom and a burden on some U.S. businesses. Kevin Kelly, CEO of Emerald Packaging, talks with an employee as they wear protective masks on a production floor of the company, which prints packaging material […] 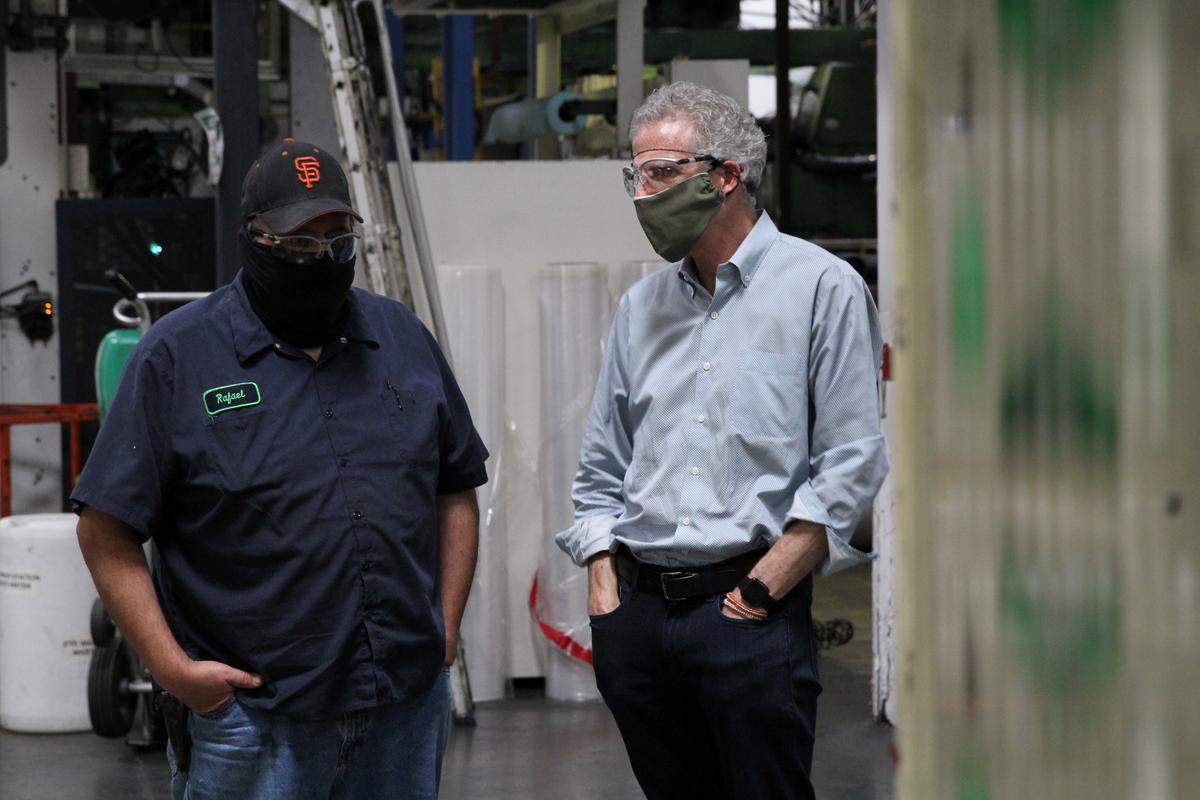