In normal times, the queue for trains at the cavernous Canary Wharf Tube station can wind all the way out into the open air. Not so now. “Since the middle of March, Canary Wharf has been a ghost town,” says Andrew Griffith, managing director of estate agent MyLondonHome, and one of 120,000 people who work in Canary Wharf.

More and more people are returning every day, he adds, but no one expects the towering office buildings here to be full again for a long time, if ever.

That is an issue for shopkeepers, employers and anyone hoping to sell or rent out a flat. “Local employment does kind of underpin the residential market,” says Ben Butler, head of residential sales locally for Savills. He characterises the local workforce as “high earners”, predominantly bankers and lawyers; people who “study the economy, know about risk and are smart with their money”.

The average price paid for a property in the area so far this year is £477,000, according to Hamptons International. Prices have risen by a third since 2010, while in Greater London overall they are up 69 per cent, to an average of £481,000.

Decoupled from the office, some current residents are looking to move to Essex or Surrey. “The banks have said: ‘You are not needed five days a week’, so people are thinking, let’s sell up, move out, get a bigger house,” Butler says.

Executives at banks including Barclays and Credit Suisse, which between them employ more than 12,000, have indicated that a full return to the office is likely to take some time.

For the clutch of developers who are busy erecting massive new towers in the area, this might be cause for concern. Within the next 12 months, thousands of new rental and for-sale homes will be built in Canary Wharf, many of them priced at higher levels than anything that’s been seen here before.

One Park Drive and 10 Park Drive, two schemes being built by the Canary Wharf Group, will bring almost another thousand homes to market within the next year. The average price in One Park Drive is £1,315 per sq ft, according to Molior London, which monitors the London market.

Though the area is rapidly changing, Canary Wharf and the surrounding Docklands is often criticised for being a little soulless: an employment district with flats attached. Efforts by local developers to imbue the area with a sense of history and place have been wide-ranging.

Ballymore, one of the main builders in the area, recently commissioned a series of “ghost signs” — painted advertisements that dot London’s old industrial buildings. Normally, the city’s ghost signs date from the 19th and early 20th centuries, but Ballymore’s are newly painted and newly faded.

Ballymore says the signs reference “our broader vision, which includes the restoration of the Grade II-listed Orchard Dry Dock . . . We’re bringing that back to its former glory”.

Berkeley Homes’ South Quay Plaza development will add a further 1,300 apartments to the mix over the next few years. One-bedroom flats are being marketed at £900,000, with access to a 56th-floor club lounge and 2.6 acres of gardens.

When finished, these apartments will arrive into an area awash with newly built homes. Tower Hamlets, in which Canary Wharf sits, has more unsold homes under construction than any other London borough, according to Molior. By the end of June, the number was just under 4,000 — around a third of the total in inner London.

Some of the unbuilt apartments that have sold will have been bought by speculative investors who never intended to set foot in them. These buyers will have paid a deposit and received a contract allowing them to complete the purchase at an agreed price at a later date.

The investor then tries to sell on that contract — a process known as assignment — for a higher price before construction work is complete. Flipping properties in this way is common in London’s new-build market and, when prices are going up, can be a lucrative bet.

But prices have fallen in Canary Wharf since 2017, according to Hamptons. That has left investors in new-build schemes holding the contracts to buy flats they do not want, and having to sell them on at a loss.

“There are more assignable contracts [in Canary Wharf] than anywhere else in London by some distance,” says Griffith, whose company specialises in the assignment market. “You’ve got six or seven developments of 700-800 units [soon to be completed]: you’re talking about a lot of flats where people are trying to get out of their contracts.”

For some buyers, that might represent an opportunity. Once the flats are built, anyone holding those contracts is obliged to complete the purchase — or else walk away and face losing their deposit.

With work on a number of towers verging on completion, there is no shortage of people looking to ditch contracts quickly, says Griffith. He knows of one investor in the area who walked away from a £1.2m apartment, losing his £250,000 deposit in the process.

MyLondonHome is currently listing 30 properties in the Wardian — a new development of two towers beside South Dock — many of which are being resold and are advertised below the original purchase price. A two-bedroom apartment in the scheme is selling for £900,000 on MyLondonHome, £170,000 less than the original price.

“We do not comment on an individual’s purchase price. We don’t believe this listing to be reflective of the market,” said Ballymore, the developer. Nearly 90 per cent of flats at the Wardian were sold, it added.

A busy assignment market creates a challenge for developers, who can struggle to sell new flats from their own brochures when buyers can pick up discounted units in the same building from investors.

In older properties, sales are being held up by new fire safety checks introduced in the wake of the fire at Grenfell tower in 2017, which killed 72 people. To issue a mortgage on any apartment that might have flammable cladding, lenders need to be satisfied the building is safe. Confirmation of that safety can come with an EWS1 form, issued after a thorough inspection.

A lack of fire-safety specialists is slowing down building checks and, even once those are done, uncertainty about the costs of remediation work means mortgage lenders are hesitant to offer loans.

But demand is coming from some quarters, agents say. Unrest and uncertainty in Hong Kong is prompting locals to move either themselves or their money overseas.

Deep cultural ties, a favourable exchange rate and the UK government’s offer of a pathway to citizenship for hundreds of thousands of Hong Kong residents who hold British National (Overseas) passports, mean London — and Canary Wharf in particular — is one of the destinations they are looking at.

Almost a third of MyLondonHome’s business is coming from Hong Kong or mainland China at the moment, says Griffith.

But overseas buyers considering a purchase should ensure they move before next spring, agents say. The stamp-duty holiday introduced by the UK government in June — which is saving buyers of more expensive properties up to £15,000 — is due to end on March 31 next year.

Then, in April, a new 2 per cent surcharge will come into force for foreign buyers. Combined, the measures will mean overseas investors face extra costs equivalent to 5 per cent of the property’s value.

As a result, agents are anticipating a quiet few months from next April. “While the sun is out and it’s shining, we’re making the most of it, but it won’t go on forever,” says Butler.

The average property price in the Canary Wharf area (E14) is £477,00, according to Hamptons, dropping by more than 6 per cent in the past two years.

The average residential rent in the area is £1,850 per calendar month, according to Hamptons, nearly 6 per cent cheaper than it was in 2015.

Since July, property buyers have benefited from a stamp-duty holiday that raises the threshold for paying the tax to £500,000 until March 31 next year — the previous threshold was £125,000, or £300,000 for first-time buyers. The government estimates the average saving to be £4,500

Properties for sale in Canary Wharf

A new-build on the 24th floor of a development called 24.4 Aspen at Consort Place on Marsh Wall. The apartment measures just over 452 sq ft of living space and has views south towards Greenwich. Building amenities include a roof terrace and pool. Available through Knight Frank.

A two-bedroom, two-bathroom flat on the 12th floor of Landmark West Tower on Marsh Wall. The property measures about 835 sq ft and has views over South Quay towards Canary Wharf. The building has a 24-hour concierge service and a private gym and the flat comes with its own parking space. Available through Hamptons.

A new three-bedroom apartment on the 44th floor of The Madison on Marsh Wall. The flat has 1,334 sq ft of living space and has views stretching across London. The building has a gym and spa facilities, and there is a members’ club for residents called The Highline Club. Available through Savills.

Wed Sep 16 , 2020
Tens of thousands of British businesses are awaiting news from their insurers on how they will respond to a landmark legal ruling on business interruption cover triggered by the coronavirus crisis. The High Court on Tuesday ruled that some insurers had been wrong to deny claims for losses caused by […] 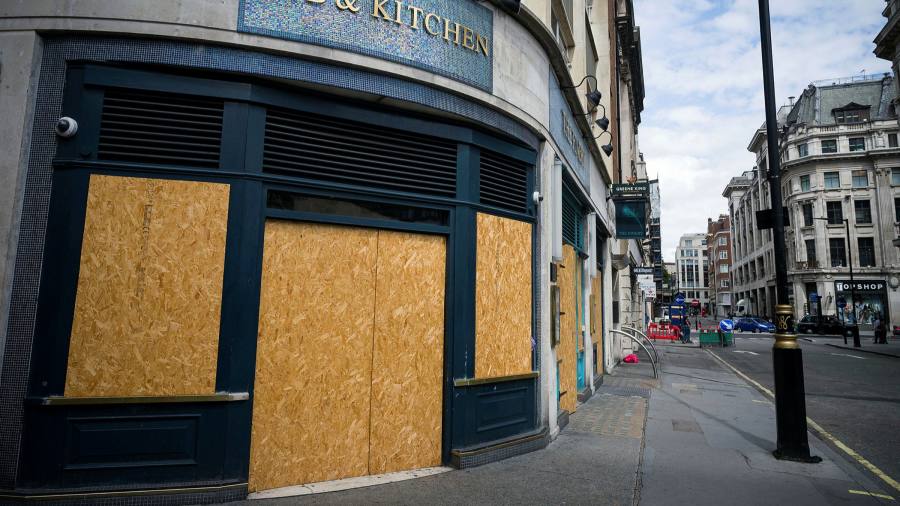