Employers are bringing increasing numbers of white collar staff back to their offices, but they are also planning radical shifts in working patterns that risk inflicting permanent economic scars across the UK.

Working from home became a reality for millions of employees during the coronavirus lockdown, and despite calls by prime minister Boris Johnson for staff to now return to offices, future arrangements are highly uncertain because of a resurgence in Covid-19 cases and a lack of clarity on when a vaccine will be ready.

But Financial Times research has found that business leaders are proposing big changes to working patterns that will have far-reaching consequences for the urban economy.

Companies are preparing plans for flexible use of offices by ever more agile workforces. Executives said offices will be used by staff for meetings and socialising, rather than traditional nine to five desk-bound work.

Legal & General, for example, said that the insurer wanted to get to a point where four-fifths of its 7,000 UK employees could spend some of their time — “a few days per week or fortnight” — in the office. The remainder would be spent working from home.

The uncertainty over working arrangements is demonstrated by how economists said there were three possible scenarios for the future.

First, if a Covid-19 vaccine rapidly becomes available, the vast majority of workers will return to the office and resume their old habits. Second, should the virus persist, most staff will work from home to try to stay safe.

But business leaders said a third scenario postulated by economists was the most plausible: that workers will do a permanent blend of home and office working.

PwC, the accounting firm, said: “In the future, we expect that all of our 22,000 people will use the office on some days.” The professional services industry is one of the sectors recording a very slow return of workers to offices.

Nick Bloom, a professor at Stanford University, said his research into corporate attitudes towards homeworking since the pandemic showed “firms are increasingly positive on working from home and stigma associated with the practice has collapsed”.

“This means the demand to work in offices will be down and skyscrapers are a cursed building,” he added.

The pandemic has attacked the most creative and sophisticated attributes of London: the dense mix of people, skills and sectors that together comprised the city centre’s vibrant ecosystem.

Splits among policymakers is further accentuating uncertainty over working arrangements. While Mr Johnson wants more employees back in the office, the Welsh government said on Sunday that 30 per cent or more of the country’s workforce should operate remotely in the long term, partly to help improve the quality of people’s lives.

But there has been an acceleration in the gradual return of workers to UK offices over the past week, with a 10 per cent increase in journeys on London Underground from Tuesday to Thursday compared with the same period in the previous seven days.

This reflects the first full week of schools being open in England, freeing working parents of some of their childcare responsibilities. Many senior managers returned to the office last week, exerting peer pressure on colleagues to do the same.

Alistair Elliott, chair of Knight Frank, the estate agent, said it was encouraging more staff to return to its London head office, ahead of the arrival of new graduate trainees who would need contact with managers. Fearing deep problems of keeping people at home, he added: “We thrive in cities — and cities thrive because of us.”

But the numbers of people in central London and other big commuter cities across the UK are still far below pre-pandemic levels. Passengers on London Underground last week were still less than 40 per cent of the typical levels for the time of year.

Data from the Centre for Cities, a think-tank, show that footfall has recovered fastest in towns and smaller cities where relatively few people use public transport, providing evidence that worker reluctance to ride on mass transit systems explains why many are keen to operate from home.

And it is not just about transport infrastructure. Julie Page, chief executive of Aon UK, the insurer, said that its City of London office — in the 47-storey Cheesegrater building — posed challenges.

For example, it would not be productive for staff to have to wait a long time to use one of the lifts, she added. “There is a pullback to the office, but the balance will be flexible, said Ms Page. “We will use offices differently.”

The immediate economic damage to large cities across the UK, and particularly inner London, is clear. The City of Westminster will suffer a 63 per cent drop in gross value added in 2020, knocking about £48bn from its economic activity this year, according to analysis by the Westminster Property Association, a trade body.

Tony Travers, a professor at the London School of Economics, said the consequences for densely populated large cities such as London and New York were profound.

“The pandemic has attacked the most creative and sophisticated attributes of London: the dense mix of people, skills and sectors that together comprised the city centre’s vibrant ecosystem,” he added.

The CBI, the business lobby group, last month expressed fears about city centres becoming ghost towns, and the City of London Corporation, the local authority for the financial district, last week called on companies to bring employees back to the Square Mile.

Catherine McGuinness, chair of the corporation’s policy and resources committee, said she was worried about the impact on local businesses, such as bars and restaurants.

“Although financial and professional services are thriving, we are very concerned about the lack of footfall to service the supporting infrastructure,” she added.

Much of the economic effect of working from home is a displacement of activity from city centres to people’s houses in the suburbs and the countryside.

While many workers have enjoyed avoiding a commute on crowded trains and buses to the office, this is likely to be harmful, according to economic geographers.

For years, economic growth and innovation has tended to come from groups of companies operating and competing in large cities. 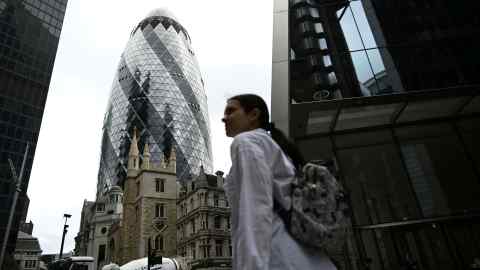 The more employees work remotely, the more likely that tacit knowledge from being in a dynamic location, meeting people from other companies and broadening networks of contacts, will fade.

Philip McCann, a professor at Sheffield University, said the evidence across the UK was clear that “cities derive their success from tacit knowledge — things that are not written down — and that’s not going to become less important. There is a real danger that working online will start to eat away at [intellectual] capital”.

He warned that if commuting and proximity to the workplace became less important, London’s size and high productivity were likely to result in it sucking more activity from other cities. “Everywhere will be hurt, but stronger cities will do better,” he said.

Professor McCann also said the overall effect would be to damage the government’s declared aim to “level-up” underperforming regions.

But even if Covid-19 unleashes sweeping changes to working patterns, with negative economic consequences, it may not prompt a much anticipated large scale shift in the population from cities to the outer suburbs and the countryside because of a lack of available housing.

“The crucial insight is that we’ve got a desperate shortage of homes so cannot have a huge change in the location of the population,” said Henry Overman, director at the Centre for Economic Performance, a government supported research centre.

Developers seek to capitalise on working from home

Property developers are eyeing ways to respond to the shift in working from the office to the home.

Urban & Civic, a developer of large housing projects, is looking at creating work areas for people alongside their housing that would be similar to the business centres found in hotels.

“You might work from home but you won’t have an A3 printer,” said Nigel Hugill, executive chair at Urban & Civic.

He added that Covid-19 has started to change how people regard property, estimating that about a fifth of house purchases after lockdown related to decisions to move out of a city to a house with more space.

Another developer, who declined to be named, said that he was seeking to buy suburban buildings in key commuter towns in southern England to turn them into flexible working hubs for companies to bring staff together near their homes.

He predicted that people would want to see their colleagues, but not necessarily by commuting into central London offices.

Mr Hugill predicted a move to a “3-2 working week”, where three days were spent by employees in the office and two working from home.

He said as long as London and other large cities were focused on knowledge-based businesses there would be an essential role for offices. “You [also] can’t do collective leadership remotely.”

Mon Sep 14 , 2020
South Belridge Oil Field is the fourth-largest oil field in California and one of the most productive in the U.S. David McNew | Getty Images Oil prices were mixed on Monday with U.S. crude rising as a tropical storm in the Gulf of Mexico forced rigs to shut down, but […]