Redundancies surged during the three months to August to the highest level since the financial crisis in 2009, official data published this Tuesday morning show. As employers in the hospitality and leisure sector, among others, have moved to cut jobs, the number of redundancies increased by a record 114,000 compared to the previous quarter, the Office for National Statistics said, with young people particularly badly affected.

There were some signs that the UK labour market stabilised in September with the number of people on payrolls increasing by about 20,000 from August. But after the sharp falls recorded in the spring, there are still almost 675,000 fewer people on payrolls than in March, with almost half a million fewer people in work than before the pandemic and almost 200,000 others employed but not currently working or earning any money.

The unemployment rate has been ticking higher. But at 4.5 per cent it is only 0.6 percentage points higher than a year ago. Numbers of job vacancies meanwhile are showing signs of a recovery, the ONS said, with a record quarterly increase in the three months to August.

Big Six energy group SSE has struck a deal to sell its stake in two “energy from waste” developments to an infrastructure investment fund for almost £1bn in cash. SSE said it had earmarked the stake as an “early priority for sale” back in June as part of a strategy to raise £2bn from asset sales by autumn next year. It has already agreed two other disposals due to raise £440m.

Pub group Mitchells & Butlers, which owns the Harvester and All Bar One chains, is one of those cutting jobs. It cited difficulties from the 10pm curfew, new enforced closures and tapering government support as reasons for redundancy consultations, which started on Monday.

Round Hill Music, which plans to invest in the copyrights to singers’ back catalogues, has announced its intention to float on the main market of the London Stock Exchange. It is seeking to raise $375m through a placing and open offer. Hipgnosis, which has a similar business model, listed two years ago on the LSE.

And finally, a parliamentary committee has warned that the UK’s £225bn professional services industry risks losing valuable EU business after Brexit, whether or not the government gets a “Canada-style” trade deal. The House of Lords EU services subcommittee warned Britain’s lawyers, accountants and recruiters had been ignored in negotiations with Brussels over trade terms. Full story from our professional services team here.

Beyond the Square Mile

A fracking binge in the American shale industry has permanently damaged the country’s oil and gas reserves, according to one of the sector’s top investors. Wil VanLoh, chief executive of Quantum Energy Partners, a private equity firm that through its portfolio companies is the biggest US driller after ExxonMobil, said too much fracking had “sterilised a lot of the reservoir in North America”. “That’s the dirty secret about shale,” Mr VanLoh told the Financial Times, noting wells had often been drilled too closely to one another.

Walt Disney has reorganised its operations to put a higher priority on streaming, days after activist investor Daniel Loeb urged the world’s largest media company to invest more in the business that Netflix has pioneered. Disney said it would separate content production from distribution, with an eye towards making television shows and movies to feed into its streaming services. The news sent Disney shares up more than 5 per cent in after-hours trade.

Net flows into exchange traded funds have jumped 40 per cent so far this year, forcing an acceleration of consolidation across the asset management industry. “The growth of ETFs is a global tectonic shift that has gathered pace since the 2007/08 financial crisis,” said Deborah Fuhr, founder of ETFGI, a London-based consultancy. Investors have ploughed $488.2bn into ETFs (funds and products) in the first nine months of this year compared with $349bn in the same period in 2019, according to ETFGI.

Lombard As John Fallon prepares to leave Pearson after seven years as chief executive and seven profit warnings he departs a business in a muddle — with its chairman Sidney Taurel right in the middle.

Lex BA is losing money hand over fist. It cannot expect the unquestioning state bailouts continental flag carriers have been receiving. Even cheap fuel is of little benefit when planes are grounded. That’s why friends of new chief executive Sean Doyle may wonder whether to congratulate or commiserate with him.

Thanks for reading. Feel free to forward this email to friends and colleagues, who can sign-up here.

Tue Oct 13 , 2020
Peter Wells in New York The US reported its smallest increase in coronavirus deaths in two weeks on Monday, but hospitalisations topped 35,000 for the first time in nearly six weeks. States attributed a further 284 deaths to coronavirus, according to Covid Tracking Project, down from 464 on Sunday and […] 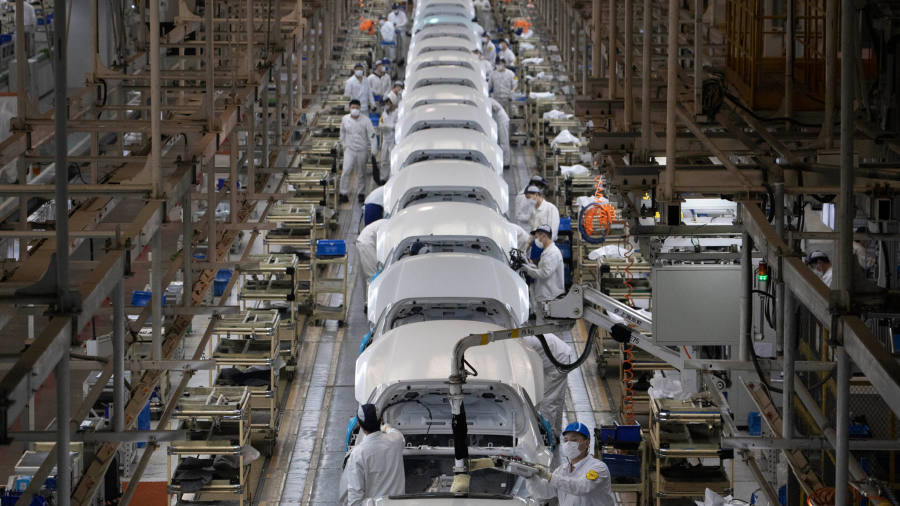