Day by day, pieces of numerical evidence and data are emerging that spell out the extent to which the global economy is being crushed by the coronavirus lockdown.

The US Labor Department revealed that, during the seven days to last Saturday, a further 4.427 million Americans registered as jobless.

That brings the total number during the last five weeks to a scarcely-believable 26.5 million – about one million more than the entire population of Australia.

Expressed as a proportion of the total US labour force, it means that one in six Americans of working age and still fit for work have filed claims for unemployment benefits during the last month.

Or, put an alternative way, it means that the equivalent of all of the US jobs created since the end of the global financial crisis in 2009 – the longest period of job creation in American history – have been wiped out.

The figures also highlighted the truly shocking rates of unemployment in some individual US states.

In Michigan, whose biggest city, Detroit, is traditionally the heart of US car-making, the jobless rate now stands at 17.4%.

In Rhode Island, another traditional manufacturing base but also home to healthcare giant CVS, the unemployment rate is now 15%.

In Nevada, home to America’s most famous casinos, the jobless rate is now 13.7%.

And in Georgia, where household names such as Coca-Cola, Honeywell and UPS have their global headquarters, the unemployment rate is now 13.6%.

Over the five weeks, in absolute terms, the most jobs have been lost in California, Pennsylvania and New York.

Expressed in terms of the proportion of the local labour force, Pennsylvania and Georgia have been worst hit.

The destruction of American jobs during the last month is without parallel.

To put it in context, during the financial crisis from 2007 to 2009, around 9 million Americans were made unemployed.

And the numbers may be even worse than suggested by these figures.

The extent to which increases in joblessness are being recorded depends on the efficiency with which individual states are able to process jobless claims.

For example, a big increase in the jobless rate in Washington State has been put down to a systems upgrade that allowed claims to be dealt with more quickly.

What is particularly worrying – and which will no doubt concern President Trump as he prepares for this November’s elections – is that the increase in US joblessness appears to be even greater than in some comparable economies.

As James McCann, senior global economist at fund manager Aberdeen Standard Investments, put it: “This is another terrible week for layoffs.

“One of the concerns is that the government support doesn’t seem to be stemming the tide here.

“The scale of joblessness in the US is clearly larger than other economies.

“This is partly due to the flexibility of the labour market, but also indicative of the problems the US has had ensuring that firms hold onto their workers in the way other countries have through wage subsidies.”

An increase in joblessness is perhaps the most obvious way of illustrating the extent to which an economy is slowing down and certainly in terms of spelling out the human suffering that an economic downturn can cause.

Another way of measuring a downturn – and, to economists, just as important – comes in the form of the Purchasing Managers Index survey data.

These are a monthly snapshot of activity in three specific sectors of the economy: services, manufacturing and construction.

IHS Markit, the financial data providers, compile the numbers by sending out questionnaires to thousands of company managers each month asking them questions about what they are seeing in parts of their business, such as new orders, hiring levels, prices and so on.

These responses are then boiled down to one number.

Anything above 50 represents growth and anything below 50 represents contraction – and the numbers are usually a very accurate guide to how the official GDP figures, which are published later, are going to look.

Today IHS Markit published the ‘flash’ PMIs for April, which are compiled from the first 85% of responses, for a number of economies.

These, too, were truly dreadful.

The ‘flash’ composite number – which combines both services and manufacturing – for the US came in at 27.4.

The figures in Europe, meanwhile, were even worse.

The composite number for the Eurozone was 13.5, again the lowest on record, down from 29.7 in March.

Within that, some of the figures were worse still, with the composite PMI figure for France – which has seen the fourth-highest total of coronavirus deaths by country – coming in at just 11.2.

Again, this is a figure without parallel, consistent with – according to IHS Markit – a quarterly contraction in GDP of 7%.

The overall health of the economy may actually be even worse than implied by the PMI figures because, as IHS Markit pointed out, the PMI survey excludes the vast majority of the self-employed and parts of the heavily-hit retail sector.

Cathal Kennedy, European Economist at RBC Capital Markets, said: “Even given the record falls in the PMI survey over the past two months, the surveys are still not picking up the true extent of the collapse in activity that is occurring at present.

“The problem with the PMIs in a situation like the one we are currently experiencing is that they only report the balance of firms saying whether activity is higher or lower.

“What they don’t tell us is by how much activity has increased or decreased.

“And in this current episode, a large number of firms will be experiencing a total halt in activity, which the PMIs can’t account for and is why the fall in Q2 GDP will be much larger than they are pointing to.”

There are not too many crumbs of comfort that can be taken from the latest figures but one, perhaps, is that the UK manufacturing sector appears to be holding up comparatively well compared with the services sector.

That may reflect that, with pubs, bars, hotels and restaurants all closed, activity in many parts of the services sector has completely frozen while in some parts of manufacturing, notably for healthcare and medical equipment, production has been stepped up in some cases.

Another is that, according to Chris Williamson of IHS Markit, business optimism about the year ahead has actually picked up from the all-time low in March.

In the US, meanwhile, although the number of new claims reported today is monstrous, it represents a slowdown from the 5.2 million claims seen the previous week, which was itself down on the week before.

It suggests that the rate at which American jobs are being destroyed has at least peaked.

The bigger question – and this depends strongly on when the lockdown ends – is when those jobs can be replaced.

Thu Apr 23 , 2020
BRUSSELS (Reuters) – Divided European Union leaders began their search on Thursday for a joint financial fund of up to 2 trillion euros (1.75 trillion pounds) to help recover from the coronavirus pandemic and avoid economic collapse in the bloc’s poorer south. A couple wearing protective face masks walks past […] 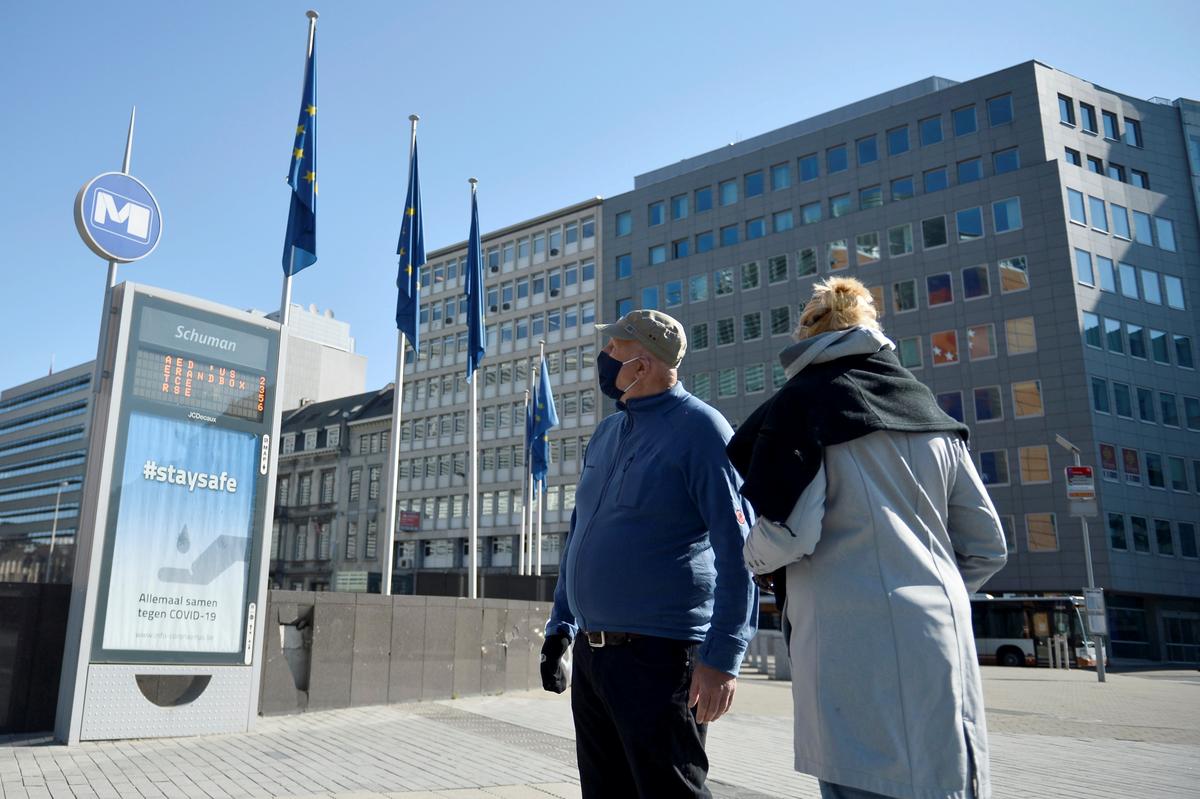