It was a trailblazer in its field – one of the pioneers of the fracking revolution that helped make the United States the world’s biggest oil and gas producer.

Today, though, Chesapeake Energy is merely the latest high-profile corporate casualty of coronavirus.

The company filed for bankruptcy protection from its creditors on Sunday after becoming overwhelmed by debts estimated to stand at $10bn (£8bn).

Its pain is likely to be shared by the companies which service the oil and gas sector – many of which got rich on the back of Chesapeake’s rise but which now stand to lose out as bills go unpaid or the rates they charge come down dramatically.

The rise and fall of Chesapeake is an extraordinary story.

Mr McClendon was among the first to appreciate the technology behind fracking and the company built its reputation on it.

Shaped very much by Mr McClendon’s own personality, it was unafraid to take risks, earning a reputation for acting quickly when it saw an opportunity.

It helped Mr McClendon, who was just 29 when he co-founded the business, take his personal fortune to $2bn.

The city and its university benefited, too, from generous donations for sports facilities.

In a nutshell, Chesapeake was built on a lot of borrowed money, a lot of ambitious acquisitions and a lot of confidence that the price of natural gas would remain comfortably above $6 per million cubic feet.

At its peak at the end of 2008, Chesapeake owned drilling rights on 15 million acres of land, around the size of West Virginia.

It operated, at one point, more than half the onshore rigs in America.

Such was Mr McClendon’s belief in the technology that he would claim oil and gas drilling was as predictable as operating a factory.

It turned out to be as hubristric a claim as that made by Gordon Brown, the former Chancellor, when he claimed to have abolished boom and bust.

Chesapeake’s profits ebbed and flowed according to natural gas prices and, after the financial crisis, Mr McClendon was almost wiped out when oil and gas prices collapsed.

Mr McClendon survived that and stuck around to try and rebuild the company’s fortunes but, in 2013, he was ousted by Chesapeake’s shareholders, led by the corporate raider, Carl Icahn.

They were already unhappy about a controversial arrangement under which Mr McClendon owned a very small share in each of the company’s wells.

They were even less impressed by revelations that the company had made him a series of previously undisclosed loans and that he had been able to borrow $1.3bn by putting up his stakes in the wells as collateral.

Shortly before his death in a car accident, in March 2016, he had been indicted on charges of conspiring to fix the price of leases in Oklahoma.

The debate still rages as to whether his death was an accident or suicide.

This, to put it in context, was greater than the combined debts of oil majors Exxon and Chevron at that time.

The story of the last few years has been one of continuing asset sales to bring down debts.

During this time, the company had to cope with the headwind of lower natural gas prices, the main commodity produced by Chesapeake for most of its existence.

At over $6 per million cubic feet, a price comfortably exceeded for much of the early 2000s, the company was highly profitable.

But natural gas has only traded at those levels – and then only briefly – during a couple of periods since the global financial crisis.

For most of 2020 it has traded at below $2 per million cubic feet and has not been this cheap for years.

Compounding this problem was a failure to move from extracting natural gas from shale to extracting oil, which has proved to be more profitable an activity, as quickly as some of its competitors.

Chesapeake really only did this meaningfully from around 2015 onwards.

Then came the oil price war earlier this year between Saudi Arabia and Russia which, at one point, caused the price of one oil contract to go negative.

Most shale oil producers in the Permian Basin, the lowest-cost oilfield to have participated in the fracking boom, require an oil price of around $49 a barrel to break even.

Chesapeake’s breakeven cost is thought to have been slightly lower than that.

However, with West Texas Intermediate, the main US benchmark, trading today at $38 a barrel, it was impossible for the company to trade profitably.

Among the likely losers from this saga, apart from Chesapeake’s suppliers and creditors, are thousands of small investors and day traders in the US, who had piled in via commission-free stock-trading platforms, such as Robinhood.

The fate of a company once nicknamed “the Google of oil and gas” is one that has already befallen some 20 or so fracking companies so far this year.

However, should energy prices persist at present levels, Chesapeake is unlikely to be the last failure of this kind.

Recriminations fly between EU and UK over financial services

Mon Jun 29 , 2020
Britain and Brussels have accused each other of hobbling efforts to determine the City of London’s EU market access rights after Brexit, with a key milestone in the talks between the two sides set to be missed. Valdis Dombrovskis, a European Commission executive vice-president, said the UK had so far […] 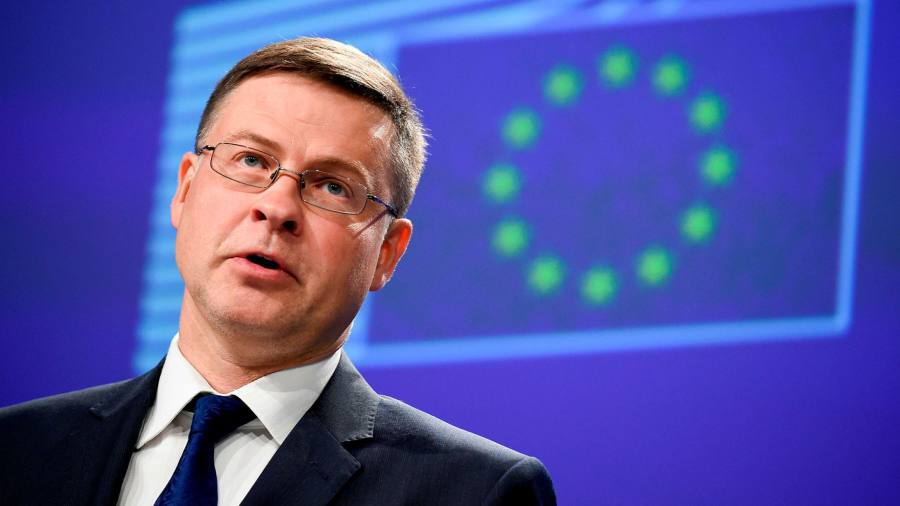