Early moves to loosen lockdown measures are having little impact on coronavirus infection rates, with a senior government scientist saying the numbers of infections were falling by half every two to three weeks. The weekly infection survey for England released by the Office for National Statistics on Friday showed an […]

Early moves to loosen lockdown measures are having little impact on coronavirus infection rates, with a senior government scientist saying the numbers of infections were falling by half every two to three weeks.

The weekly infection survey for England released by the Office for National Statistics on Friday showed an average 33,000 people in the community were infected with coronavirus during the period May 25 to June 7, equivalent to 0.06 per cent of the population.

The ONS said its statistical analysis “confirms that there is a clear downward trend”. The proportion of the population infected during the previous fortnight (May 11 to 24) had been 0.22 per cent.

Separately the government’s Scientific Advisory Group for Emergencies (Sage) for the first time published regional values for R — the coronavirus reproduction number — with the estimate for South-West England highest at 0.8 to 1.1.

The number remains between 0.7 and 0.9 for the UK as a whole, a range that has persisted for several weeks; it is 0.8 and 1.0 for England. It is most likely to be in the middle of these ranges, according to Sage.

R measures viral transmission, or the average number of people to whom someone infected will pass the virus. The epidemic will decline at an increasing rate if it is less than 1, as government scientists believe is the case throughout the UK — with the possible exception of some very local infection hotspots.

“There is no doubt that the epidemic is decreasing,” said Prof Keith Neal, an epidemiologist at the University of Nottingham. “We currently have more restrictions than other European countries have and for some countries more than they ever had.

“There are currently only minor lifting of restrictions that have had time to show up in an increased rate of infection and this has not happened,” he added.

The ONS estimated that the number of new infections in England since its survey started on April 26 has averaged 4,500 per day for people living in the community. The figures do not include hospitals and care homes. The study is based on tests performed on 20,000 people in 9,000 households selected to be a representative sample of the population.

The comparable estimate released last week was 5,600 per day since April 26. Daily infections are likely to be below 4,500 now, since the rate is falling, but the ONS said it would not be statistically secure to give a current estimate.

“This good news may appear to conflict with the consensus regional estimates for R,” said Prof Sheila Bird, a bio-statistician at Cambridge university. “But estimates for R potentially relate to incidence some two to three weeks previously.”

She advised people to steer away from over-reliance on R “when infection incidence is what really matters”.

The government said it hoped next week to issue more realistic regional estimates for the growth or decline in coronavirus, based more firmly on data and making fewer assumptions.

Fri Jun 12 , 2020
The EU will enforce full customs and regulatory checks immediately after Brexit and will not reciprocate the UK’s plan for a temporary light touch border on the British side of the English channel, a senior Brussels official warned on Friday. Maroš Šefčovič, a vice-president of the European Commission who co-chairs […] 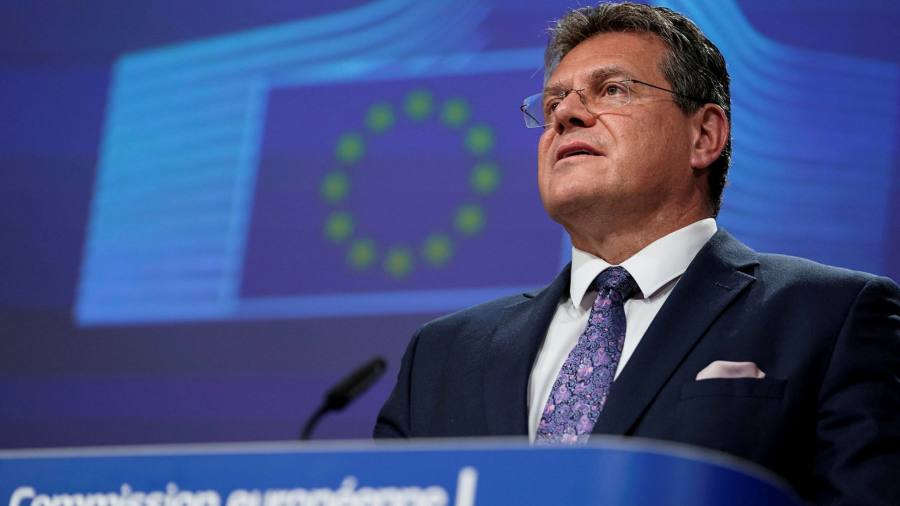