A senior Bank of England official has dismissed pessimistic “Chicken Licken” views about the UK economy – as revised official figures confirmed it had suffered a record-breaking slump.

Andy Haldane, the Bank’s chief economist, warned that “encouraging news about the present” risked being “drowned out by fears for the future”.

Live updates on coronavirus from UK and around world

“Now is not the time for the economics of Chicken Licken,” Mr Haldane said in a speech – referencing a children’s folk tale about a chicken who believes the sky has fallen.

He also dampened down speculation about the Bank implementing negative interest rates, saying none of the conditions that could justify such a move had been met.

That was slightly better than the initial estimate of a 20.4% contraction after the economy was crushed by the coronavirus lockdown.

But it still meant that, when added to a 2.5% dip in the first quarter – worse than had been estimated earlier – the UK suffered the biggest recession on record.

However Mr Haldane argued not enough attention had been paid, when the initial GDP figures came out, to a monthly breakdown showing the strength of the economy’s bounce-back following its initial collapse in April.

He acknowledged that the UK faced an “unholy trinity of risks from COVID, unemployment and Brexit”.

But the Bank official – who has previously suggested the shape of the recovery is “so far, so V” – said it was important that the strength of the economic revival was not overlooked.

“My concern at present is that good news on the economy is being crowded out by fears about the future,” Mr Haldane said.

“This is human nature at times of stress.

“But it can also make for an overly-pessimistic popular narrative, which fosters fear, fatalism and excess caution.”

Mr Haldane argued that “pessimism can be as contagious as the disease – and as damaging to our economic fortunes”.

“Avoiding economic anxiety is crucial to support the on-going recovery,” he said.

Mr Haldane said GDP now looked set to grow by a record 20% in the third quarter, helped by a surprisingly robust bounce-back in consumer spending.

That would still leave the economy 3-4% below pre-pandemic levels though if such a scenario had been offered earlier in the summer “absolutely everyone would have been a buyer” he said.

Mr Haldane also suggested that the strength of recovery, as well as the announcement of a jobs support scheme, meant unemployment by the end of the year might not be as high as 7-7.5% which the Bank forecast in August – though that could be offset by the impact of new lockdown measures.

Wed Sep 30 , 2020
Retailers have paid only a fraction of the rent they owe for the latest quarter, as UK high streets come under growing pressure in the face of tightening coronavirus restrictions. Shop owners paid 13 per cent of their rent bill on Tuesday, when payment was due for the three months […] 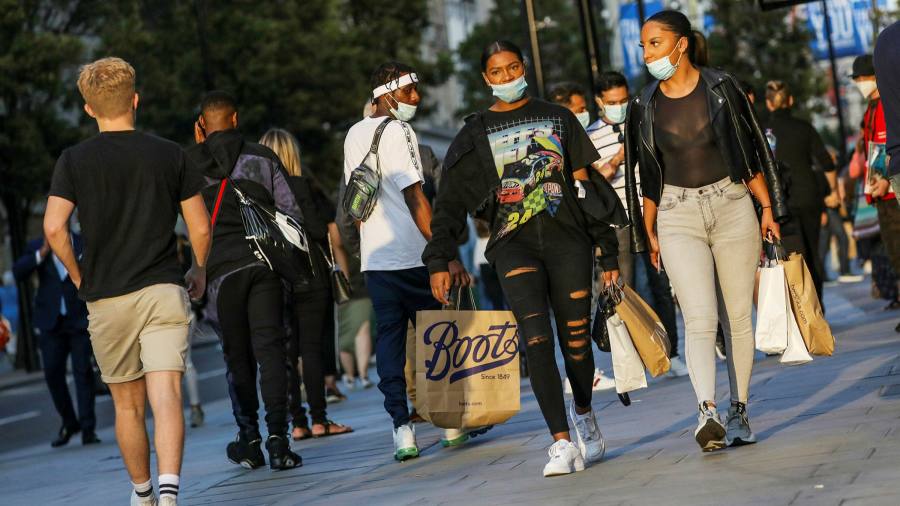