Travel and hospitality stocks have been hit by fears of a second lockdown, as the number of UK coronavirus cases increases.

Airlines were the worst-hit: International Airlines Group, which owns British Airways, Aer Lingus and Iberia, was down 11.3% just after 3.30pm.

It comes after news that, with COVID-19 cases now doubling every seven to eight days, Prime Minister Boris Johnson is considering national restrictions for a short period to “short-circuit” the virus.

Proposals include allowing essential travel to schools and workplaces but closing or restricting restaurants and bars and banning gatherings between different households.

It has been reported that these restrictions could last for two weeks.

Joshua Mahony, senior market analyst at IG, said: “The threat of further a second round of COVID restrictions in London has dented confidence, with the travel sector in particular feeling the heat as we head into the weekend.

“While localised restrictions have become somewhat normalised of late, the economic importance of London means we are likely to see a more significant market reaction if the growth in cases leads to significant economic consequences.

“From a tourism perspective, the rise in COVID cases in the UK does little to help boost sentiment around travel stocks. While we have become accustomed to the UK imposing quarantine restrictions on visitors from specific countries, the prospect of quarantines on UK tourists holidaying abroad would put a major stake in heart of the travel industry.”

Cruise company Carnival had lost 5.8% by 3.30pm and InterContinental Hotels Group, which owns Holiday Inn and Crowne Plaza among others, was down 3.9%.

Pub chain JD Wetherspoon was down 3% and Restaurant Group, which counts Wagamama among its restaurants lost 6%. Whitbread, which owns hotel chain Premier Inn and food businesses such as Beefeater, fell more than 1.7%.

Russ Mould, investment director at AJ Bell, said: “Amid growing chatter about a potential two-week nationwide lockdown in October in the UK, it was perhaps no surprise to see investors lose interest in stocks that could be negatively affected by such activity.

Fri Sep 18 , 2020
Brussels has rebuffed changes to the UK government’s controversial plan to override last year’s Brexit deal, saying the compromise with Conservative MPs did not address the EU’s objections and would still leave Britain in violation of international law.  Boris Johnson’s government on Thursday published details of adjustments it had agreed […] 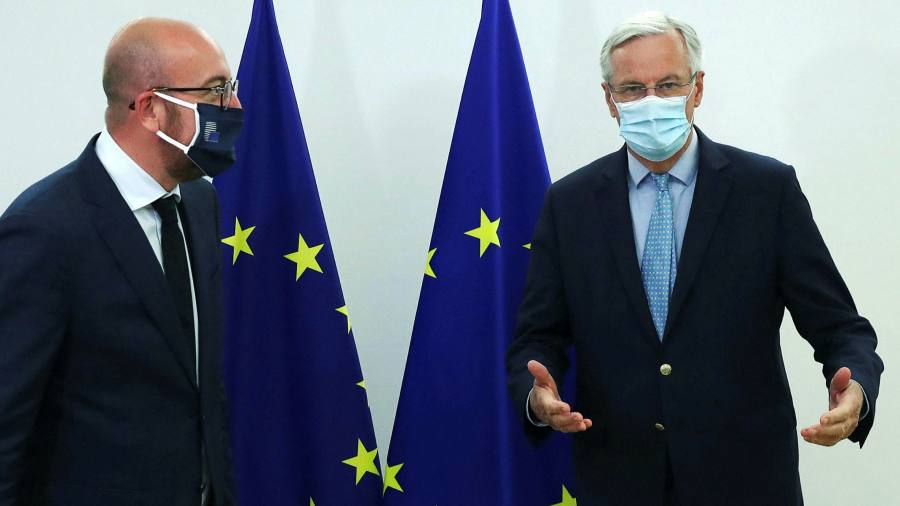