Britain’s economy could shrink by 35% in the second quarter and see unemployment jump by two million, according to a scenario published by the Office for Budget Responsibility (OBR).

The UK fiscal watchdog published an estimate of the potential impact of the pandemic based on a three-month lockdown followed by a three-month period when restrictions are only partially lifted.

It sees GDP bouncing back quickly after its sharp contraction in the April-June period but estimates that the jobs market will take longer to recover.

The big increase in joblessness would take the unemployment rate up to 10%, a level not seen since the early 1990s. The rate currently stands at 3.9%.

The OBR scenario sees government borrowing for 2020/21 climbing by £218bn to £273bn, or 14% of GDP – the largest single year deficit since the Second World War.

That is based on an assessment of the devastating economic impact of the lockdown on tax receipts as well as the additional spending by the government to try to address the crisis.

Those interventions will support individuals and businesses through the period and boost the availability of finance, the OBR said.

“They should also help to limit any long-term economic ‘scarring’ – for example, due to cancelled business investment, widespread business failures and the unemployed losing contact with the labour market,” it added.

“Such scarring would both harm future living standards and increase the structural budget deficit.”

The OBR stressed that its figures represented a “scenario rather than a forecast” based on the assumption that people’s movements would be “heavily restricted for three months and would get back to normal over the subsequent three months”.

They illustrate the likely scale of the challenge facing Chancellor Rishi Sunak, who has pledged to do “whatever it takes” to see UK households and businesses through the crisis.

The OBR scenario sees GDP recovering sharply in the third and fourth quarters of the year – though overall there would be a decline of 13% for 2020.

That outlook would “comfortably exceed any of the annual falls around the end of each world war or in the financial crisis”, the watchdog said.

The OBR suggested that it was the response to the pandemic rather than the effects of the disease itself that represented the main threat to the economy and the public finances.

“Evidence from past pandemics suggests that the economic impact of the coronavirus will arise much less from people falling ill or dying than from the public health restrictions and social distancing required to limit its spread.

“This will reduce demand for goods and services and the ability of businesses and public sector institutions to supply them.

“That means lower incomes, less spending and weaker asset prices, all of which reduce tax revenues, while job losses will raise public spending.”

Responding to the OBR, Chancellor Rishi Sunak said: “Firstly, it’s clear this will have a very significant impact on our economy – as it will for economies around the world. It’s important that we’re honest about that.

“People should know that there is hardship ahead and we won’t be able to protect every job or every business, as I’ve said.

“Second, the report makes clear that the unprecedented actions we’ve taken will help to mitigate the impact of the virus on our economy and that if we hadn’t done these thing it would mean that things were a lot worse, for example the impact on unemployment.”

The grim outlook is likely to be repeated across many world economies – amid predictions of the worst global slump since the Great Depression of the 1930s.

European countries have already begun counting the cost with France’s central bank estimating that it is already in recession and grim forecasts also outlined for Germany.

Tue Apr 14 , 2020
(Reuters) – British American Tobacco (BAT) <BATS.L> is the subject of a U.S. criminal investigation over suspected sanctions-busting, The Times reported https://bit.ly/2ydR5Wm on Tuesday, sending the company’s shares down more than 5%. The world’s second-biggest tobacco group on Tuesday said it was cooperating with the U.S. Department of Justice (DoJ) […] 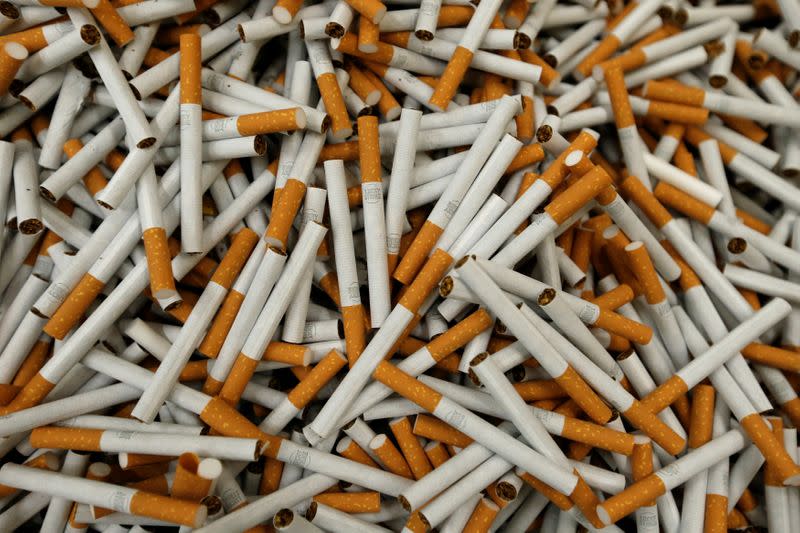