The UK faces a “significant recession”, the chancellor has warned, after figures showed the economy shrank by 2% in the first three months of the year.

The figures are the first official look at the lockdown’s financial effects and show a contraction of 5.8% in March GDP (gross domestic product) alone – the biggest monthly fall on record.

The UK went into lockdown near the end of the quarter in an effort to limit the spread of coronavirus, so the quarterly GDP figure is only a partial representation of the lockdown’s financial impact.

Recession requires two consecutive negative quarters and this seems almost certain when the current quarter ends in June, as that will have been dominated by lockdown restrictions.

Chancellor Rishi Sunak told Sky News: “Technically a recession is defined as two quarters of negative GDP, we’ve now had one…so yes, it is now very likely that the UK is facing a significant recession at the moment and this year.”

The Office for National Statistics said: “The impacts of the coronavirus were seen right across the economy, with nearly all sub-sectors falling in the three months to March.”

Sky’s economics editor, Ed Conway, said: “It’s worth remembering that the falls we are seeing in economic activity around the world are largely a reflection of the lockdown measures imposed by governments.

“The UK was relatively late to impose a lockdown, which helps explain why other countries which moved quicker – Italy, Spain, France and China, for instance – have seen far bigger contractions in the first quarter.

“But in much the same way, the UK is expected to see a far sharper decline in the second quarter of the year – the one we’re in at the moment.”

Included in the first-quarter figure was a 1.9% fall in the services sector – which accounts for around 80% of the UK’s GDP. There was also a 2.1% fall in production and a 2.6% fall in construction.

Suren Thiru, head of economics at the British Chambers of Commerce, said: “The speed and scale at which coronavirus has hit the UK economy is unprecedented and means that the Q1 decline is likely to be followed by a further, more historically significant contraction in economic activity in Q2.”

The Confederation of British Industry’s chief economist, Rain Newton-Smith, said: “Ultimately, keeping health at the heart of a recovery plan will be key to sustaining an economic revival.”

Trades Union Congress general secretary Frances O’Grady added: “What’s important now is having the right plan for Britain’s economic recovery – a plan that keeps us safer than before, and that makes Britain fairer than before for the key workers who have put their lives on the line.”

Nicholas Cawley, strategist at Daily FX, said: “A ‘V-shaped’ recovery is looking less likely, despite the huge amount of monetary and fiscal stimulus recently announced. It may be that we have already made the first half of a ‘W-shaped’ recovery with further downside seen before the full effect of the various stimulus packages flow through the economy.

“An ‘L-shaped’ recovery or a ‘lost decade’ is very unlikely as the Bank of England stands ready to act further with both top-down and bottom-up monetary and fiscal support, forcing economic recovery, however much it takes.

England tiptoes out of full lockdown as economy plunges

Wed May 13 , 2020
LONDON (Reuters) – England tentatively began easing its coronavirus lockdown on Wednesday, with some people who cannot do their jobs at home urged to return to work, as stark economic data showed the disastrous impact of the pandemic. Commuters, some wearing masks are seen at Canning Town station, following the […] 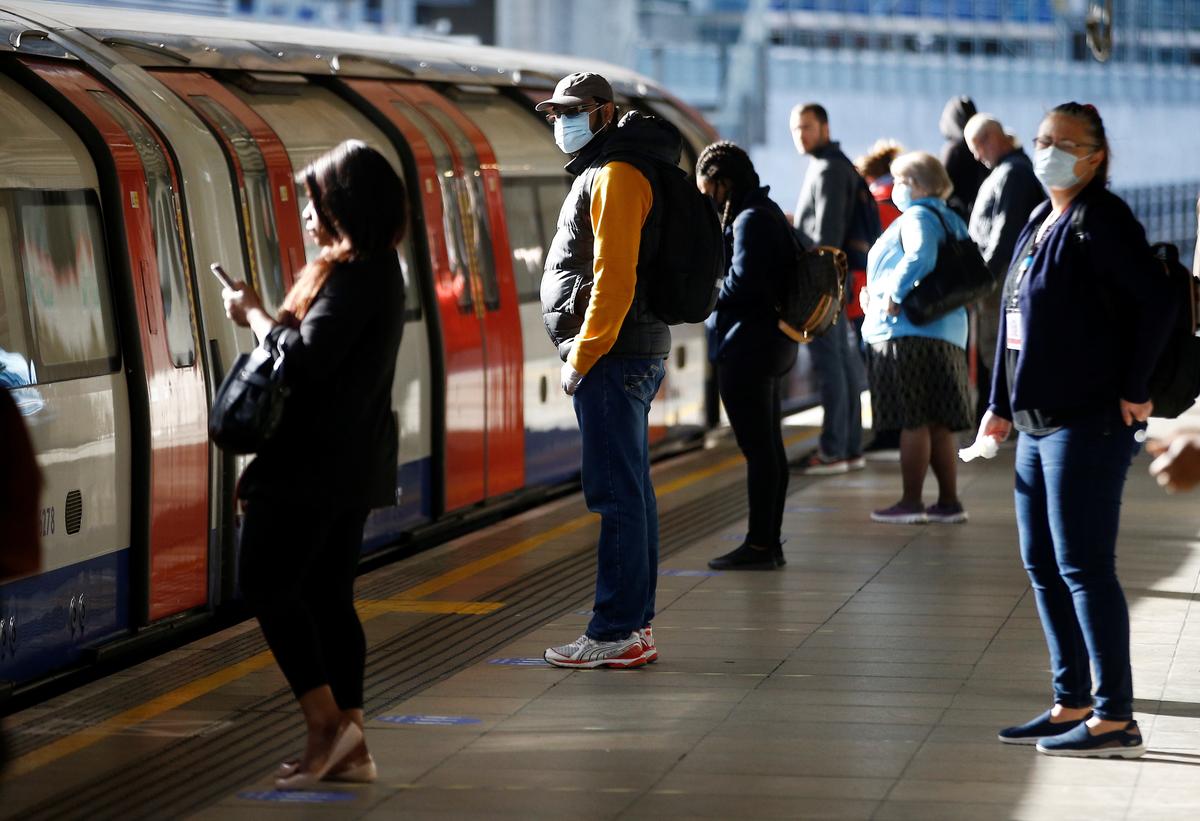