Ministers are planning the biggest reorganisation of English local government for 35 years by effectively merging county and district councils, the top two tiers of authority.

Simon Clarke, regional growth minister, revealed on Wednesday that any area that wanted an elected mayor would have to form streamlined unitary authorities, combining the powers of county and district councils. Parish councils, the lowest and least powerful tier, will remain.

The move, which would likely cut the 218 district and county councils by around two-thirds, will be fiercely resisted by many councillors and some MPs, since they are among the most active Conservative party members.

Mr Clarke told the Northern Powerhouse Economic, Education and Skills Summit that the proposals would be in a devolution white paper in September.

I hope they have the determination to follow through. But I think there will be some interesting conversations with a number of Tory MPs.

It will “redefine the way in which local government serves its communities by establishing the unitarisation of councils as a vital first step for negotiating these mayoral devolution deals in the future,” Mr Clarke said.

“A move to unitarisation will streamline the delivery of good governance, place local government on a more sustainable financial and population footing and inject more accountability into our democratic structures and save money that can be reinvested in those communities.”

While the move will be voluntary, Mr Clarke added that “the gap between those areas that have mayoralties enjoying the resulting funding and freedoms . . . and those areas that do not . . . will only widen”.

Acknowledging there could be opposition, he said “change is challenging” and he would be available to discuss the plan with MPs.

Cumbria, North Yorkshire and the East Riding of Yorkshire are already discussing combining districts to have an elected mayor, Mr Clarke said. Cambridgeshire and Peterborough has a mayor despite retaining district councils.

In multi-tier areas, the county is responsible for education, transport and social care while districts handle waste, libraries, leisure centres and planning. Council tax receipts are divided between them.

Ministers believe the coronavirus crisis has created a moment of opportunity. Councils face an estimated funding shortfall of £5bn over the next year because of lost income and higher costs.

There have been several shake-ups of local government in recent years but none on this scale. In 2008-9 some areas such as Cheshire were forced to split into two unitaries. The last big move was in 1986 when the Conservatives abolished large metropolitan authorities including Greater London and Merseyside, then controlled by the hard left and opposed Thatcherite economic reforms.

Jim O’Neill, the former Treasury minister, said Conservatives and councillors had scuppered devolution talks he held previously because they did not want elected mayors or council reform. “I hope they have the determination to follow through. But I think there will be some interesting conversations with a number of Tory MPs.”

However, another ex-minister said the 80-strong Tory government majority and a younger, more reformist 2019 intake of MPs would allow the prime minister to ignore dissenters. “Most MPs don’t like two tier councils and most voters don’t know the difference. There will be a lot of Tory councillors who will be not very happy about this. Normally they would vent their spleen at the party conference but it has been cancelled. It is good timing,” the ex-minister said.

“What would I say to those councillors? Boohoo.”

Ged Mirfin, a Conservative councillor in Ribble Valley in Lancashire, was already rallying support on Thursday. He wrote on the Conservative Home website that it was “reorganisation by stealth” and warned of a “public backlash against even more remote and inaccessible power structures than county councils represented in the first place”.

Wed Jul 15 , 2020
China has stepped up its attacks on Boris Johnson over his ban on new Huawei equipment, suggesting he had reduced Britain “to a vassal of the US” and vowing to take “all necessary measures” to defend the country’s commercial interests. The warnings from China’s foreign ministry came as Conservative MPs […] 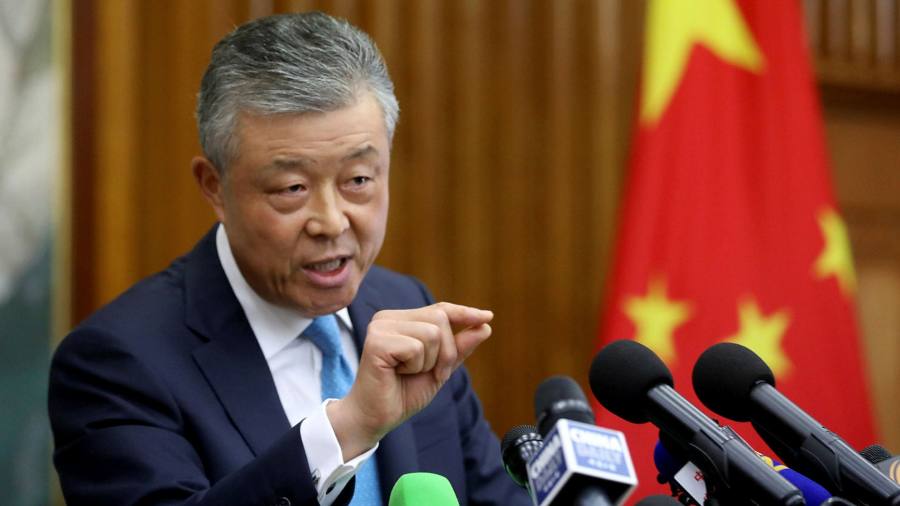