Deep under London, 200-metre-long trains zip through tunnels connecting cavernous new stations in the final tests before Crossrail opens by the end of June.

The £19bn new east-west project — now called the Elizabeth line — was planned in the 2000s, the years of ever growing passenger numbers. But after a bruising pandemic for public transport, it is unclear not only how many people will ever ride on the long-delayed and overbudget railway but how many more such mega-projects there will be in the UK.

Emergency government financial support for services is tapering, and transport authorities and operators face a reckoning to adapt to changes in travelling patterns.

Passenger numbers on buses and trains are about 75 per cent of pre-pandemic levels, in contrast to driving, which has fully recovered, as newfound habits of working from home and shopping online persist.

“The genie is out of the bottle — people have seen that working from home is a viable alternative,” said Andy Byford, Transport for London commissioner, during a trial of the new line that had been expected to carry 200mn passengers a year. “There’ll be quite a lasting impact”.

Executives estimate that it could take years for passenger levels to fully recover.

Manuel Cortes, general secretary of transport union TSSA, said public transport’s economic model had been rewritten as commuters no longer need to be “squashed like sardines in a train carriage . . . while paying Rolls-Royce fares”.

The funding crisis is particularly acute in London. After receiving more than £5bn of emergency funding, TfL is asking the central government for a further £1.5bn to see it to the end of its 2023/24 financial year. Negotiations have been extended until this Friday, and mayor Sadiq Khan announced the biggest fare rise in a decade last week.

Byford has warned that without a long-term funding package it will enter “managed decline”.

“We need to avoid that scenario because you get into a downward spiral,” he said. “If you allow the infrastructure or service to degrade then people will stop using it and therefore your finances and your services continue to get worse.”

Fears of such a vicious circle are rife within the bus industry — already hit by a decades-long slide in passenger numbers outside of London. Operators warn that up to 30 per cent of services could be axed in April when Covid funding ends. Such cuts would deal a devastating blow to prime minister Boris Johnson’s “levelling up” ambition to make public transport closer to “London-style” services outside the capital by 2030.

On the railways, passenger numbers during the early stages of the pandemic fell to their lowest since records began in 1872, and the industry expects to lose £20bn in fare revenue between 2020 and 2025, according to figures from the Rail Delivery Group, which represents train operators, seen by the Financial Times.

Two industry executives said it was too early to tell whether services would ever need to return to their old timetables but predicted fewer trains during rush hour and more at weekends.

“If you remove capacity, what you can’t afford to do is remove capability. Once you take that out it is very difficult and costly to bring it back.”

The Department for Transport said it had been “committed to supporting and maintaining the country’s transport network” throughout the pandemic. “Now, as restrictions lift, it is central to getting our economy moving again,” it said.

Yet the Treasury is in belt-tightening mode and public transport is caught in the crosshairs.

Crossrail is the last major transport project being built in London; plans for a north-south Crossrail 2 and an extension to the Bakerloo Underground line have been put on hold for at least five years, Byford said.

The HS2 high speed rail line linking London to the north of England is still going ahead as part of a £96bn package of regional rail improvements, but has been scaled back.

Ministers have spent more than £14bn keeping trains running over the past two years, but have ordered operators to identify savings as support winds down. “We are all under scrutiny,” one rail executive said. Great British Railways, a new body being set up to oversee the network, has also been ordered to find £1.5bn of annual savings.

“We know the railway can’t take more than its fair share of financial support from taxpayers and that will mean making changes to how we run our services,” said Andy Bagnall, the Rail Delivery Group’s director-general.

The bus industry was disappointed when the autumn spending review revealed only £1.2bn would be allocated to local improvement plans, falling short of the £3bn of fresh funding promised in last March’s national bus strategy. DfT insists new money exceeds £3bn if £1.7bn of emergency pandemic support is included.

Funding is not the only pressing issue for transport companies. During the pandemic, the government effectively nationalised the railway system.

Christian Schreyer, the new chief executive of transport company Go-Ahead, said the private sector “needs to have more freedom” in the rail industry to introduce innovation and reduce costs to attract more travellers.

Many rail bosses fear that government reforms to centralise control under Great British Railways will have the opposite effect.

Other executives said that UK transport regulation needed to become more flexible to better match services to demand. For example, bus operators must currently notify local authorities at least 70 days in advance of changes to services.

Despite the challenges, the transport industry is optimistic that mass transit will benefit from the government’s goal to reach net zero carbon emissions by 2050.

But whether the government follows through on its stated aims by providing funding to improve public transport — and even take a step further by pushing consumers away from using cars — remains an open question.

While some argue that younger consumers may naturally flock to public transport, industry executives are becoming increasingly vocal about the need for heavy-handed interventions such as a road tax to penalise car users.

If the government is serious about net zero, said Schreyer, “you need to force the modal change from individual car usership to public transport — there’s no way around it”.

Mon Feb 21 , 2022
Boris Johnson’s attempt to draw a line under the worst phase of the Covid pandemic was soured on Monday as a fierce cabinet row broke out over the cost of future testing for the disease. Johnson was forced to postpone a special Covid cabinet meeting with less than 10 minutes’ […] 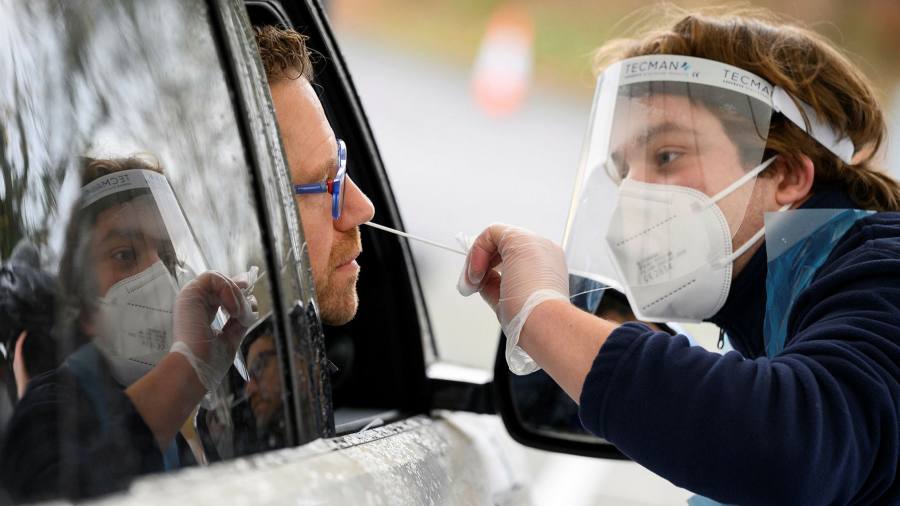