SINGAPORE (Reuters) – The dollar and yen held broad gains on Wednesday, as a bounce in oil prices failed to calm market nerves, with the week’s rout and frail fuel demand underlining a grim outlook for the global economy.

The greenback sat just below a two-week peak against a basket of peers, and barely budged against commodity currencies whacked by the oil collapse, even as U.S. crude jumped 20%. [O/R]

The safe-haven Japanese yen held at 107.83 per dollar and both the U.S. currency and yen were steady against the oil-sensitive Canadian dollar and Norwegian krone. The Australian dollar battled to pull ahead, but hit resistance around $0.6300.

“The bears are certainly getting the upper hand,” said Chris Weston, head of research at Melbourne brokerage Pepperstone, adding that it was hard to bet against the dollar in such a climate.

The recovery in U.S. crude lifts it out of negative territory, but at just shy of $14 a barrel, it is still some 80% under January’s peak as cratering energy consumption due to coronavirus lockdowns creates a supply glut.

The plunge has soured appetite for risk and seems to have halted a rebound in stock markets as investors brace for a longer and slower global economic recovery.

The greenback has gained half a percent this week on a basket of currencies and stands near multi-week highs against currencies of oil exporters such as Russia, Norway and Canada.

It advanced against most Asian currencies on Wednesday and gained most on the New Zealand dollar, rising about 0.3% to $0.5959 after the Reserve Bank of New Zealand’s governor on Tuesday again raised the prospect of negative rates.

The euro remained rangebound, holding at $1.0856, while the British pound held near a two-week trough after a gloomy assessment of recovery prospects from the Bank of England’s chief economist.

His evaluation that a swift recovery is by no means certain comes as countries around the world adopt a cautious approach to re-opening.

Australia’s central bank governor, Philip Lowe, said on Tuesday that the country is likely to experience its biggest contraction in output since the 1930s, and that a quick return to business as usual should not be expected.

“The fall in commodity and equity prices is a signal market participants expect the world economy to remain weak for some time, even once the lockdowns are eased,” said Commonwealth Bank of Australia FX analyst Joe Capurso.

“We expect the weak world economy to bear down on the Australian dollar and for the Aussie to oscillate around $0.6000 in coming months.”

Wed Apr 22 , 2020
The coronavirus pandemic has already caused as many as 41,000 deaths in the UK, according to a Financial Times analysis of the latest data from the Office for National Statistics. The estimate is more than double the official figure of 17,337 released by ministers on Tuesday, which is updated daily […] 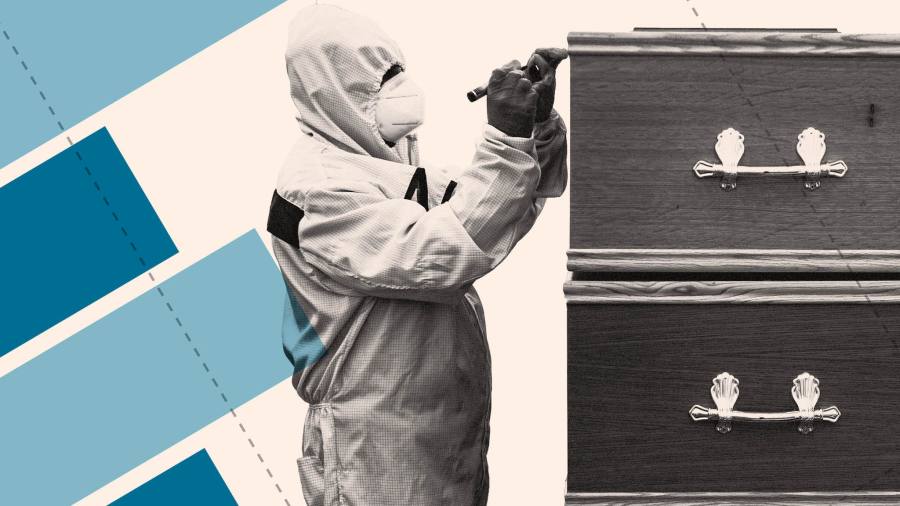