LONDON (Reuters) – EasyJet (EZJ.L) and cruise operator Carnival (CCL.L) are set to lose their seat at the top table of British blue chips after the COVID-19 crisis knocked the value of their shares to below the threshold of London’s prestigious FTSE 100 .FTSE index.

FILE PHOTO: A car park is seen behind a EasyJet plane at Luton Airport, following the outbreak of the coronavirus disease (COVID-19), Luton, Britain, May 1, 2020. REUTERS/Andrew Boyers

Hard-hit by travel bans, the low-cost airline lost as much as two thirds of its market value during the peak of the pandemic crisis and despite a vigorous bounce-back, its market capitalisation was only ranked 125th based on Monday’s stock market close in London.

FTSE Russell, which will announce its quarterly shuffle of the FTSE 100 index on Wednesday, requires companies to be ranked at least 110th to be part of the blue-chip index.

EasyJet, which plans to cut up to 4,500 jobs and shrink its fleet, had returned to the FTSE 100 only last December after a fall in its shares had triggered an exile from the index.

“EasyJet would need a big rally, but it could come back in September,” at the occasion of the next reshuffle, said Russ Mould, investment director at AJ Bell.

“With airlines, anything is possible”, he added, referring to the extreme market volatility experienced by these companies.

Europe’s Travel and Leisure index .SXTP lost up to 58% of its value in less than a month in mid-March before rallying more than 60% since. The recovery was not enough for Carnival to retain its FTSE 100 crown.

The last reshuffle in March had already exposed the pain in the tourism industry with the exit of European holiday company TUI (TUIT.L).

British Airways owner IAG (ICAG.L) and InterContinental Hotels Group IHGL.L will continue to fly the travel industry flag within the FTSE 100 after the reshuffle while Premier Inn owner Whitbread (WTB.L) is close to the departure gate.

Among the other companies expected to be dropped from the index are Britain’s largest energy supplier Centrica (CNA.L) and engineering company Meggitt (MGGT.L).

Companies which could enter the index include cybersecurity firm Avast (AVST.L) and Ladbrokes and bwin owner GVC (GVC.L), which many investors thought would suffer greatly from the crisis with so many sporting events cancelled.

“Unlike some other operators GVC has multiple strings to its bow, and its online casino business has seen a modest rise in activity”, Nicholas Hyett, an analyst at Hargreaves Lansdown wrote in a note to clients.

Tue Jun 2 , 2020
U.S. President Donald Trump holds a Bible as he talks to the media while standing in front of St. John’s Episcopal Church across from the White House after walking there for a photo opportunity during ongoing protests over racial inequality in the wake of the death of George Floyd while […] 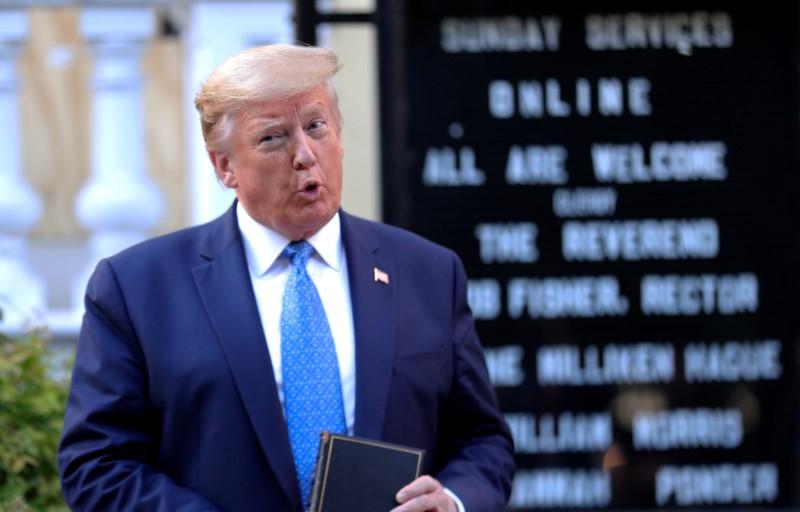