LONDON (Reuters) – European markets are hoping the ECB, again facing the task of rescuing the euro zone, will soon add junk-rated company debt to its stimulus programmes, but some investors say such a bold move might prove counterproductive. FILE PHOTO: The head quarter of the European central bank (ECB,R) […]

LONDON (Reuters) – European markets are hoping the ECB, again facing the task of rescuing the euro zone, will soon add junk-rated company debt to its stimulus programmes, but some investors say such a bold move might prove counterproductive.

FILE PHOTO: The head quarter of the European central bank (ECB,R) is photographed during sunset in Frankfurt, Germany, April 22, 2020, as the spread of the coronavirus disease (COVID-19) continues. REUTERS/Kai Pfaffenbach

Since the fateful ‘whatever-it-takes’ moment in 2012 – when its then president Mario Draghi pledged to save the euro at any cost – the European Central Bank has shown a readiness to cross red lines whenever the bloc’s economy is in trouble.

European leaders’ failure to agree on the one measure that might have calmed markets – joint debt issuance – means this is another such time.

Concerned about liquidity constraints in the banking sector, and possibly anticipating that Thursday’s EU summit would disappoint, the ECB this week extended the range of lenders’ eligible collateral to the debt of sovereigns and companies cut to non-investment grade during the coronavirus outbreak.

The ECB’s decision has left the door open to an even bolder move – following the U.S. Federal Reserve in pledging direct purchases of ‘fallen angel’ bonds downgraded from investment to junk. And might it then also dip more broadly into junk debt?

For now, with the loosening of the collateral rules ostensibly targeted more at easing bank liquidity than at helping companies, many reckon the ECB will only take one or both of those steps if there is another blow-out in high-yield rates or many more credit ratings downgrades..

“(The ECB) doesn’t want to be seen to support companies that have taken on a lot of risk on their balance sheets.”

The spectre of mass downgrades is something of a reckoning for companies that binged on cheap debt for a decade. Rating agency S&P Global estimates that default rates among speculative-grade European firms could quadruple this year from end-2019 levels.

There are reasons why expanding bond-buying to junk makes sense.

The ECB already holds the debt of companies with a mix of ratings on its balance sheet, and it has started accepting junk-rated Greek sovereign bonds.

More importantly, highly-indebted Italy could lose its investment grade rating. Even if it doesn’t, the debt of many of its banks and companies risk becoming junk, which would undermine its financial system.

Bank analysts forecast as much as 100 billion euros of European corporate debt will be downgraded to junk in 2020.

S&P has already turned six European firms into fallen angels this year and its global list of others at risk of the chop is the longest since the financial crisis and includes household names like Renault (RENA.PA) and British Airways (ICAG.L).

Buying junk debts would also represent a huge risk for the ECB for potentially modest benefits.

Compared to U.S. firms that turn to bond markets for around 70% of their financing, European corporates rely more on loans, borrowing via bonds for around a third of their needs.

The hit to company finances from the virus could prove temporary too, he added, though his view is predicated on “strong rebounds” later in 2020.

With the coronavirus widely expected to decimate the global economy, many analysts and investors say the ECB is heading towards purchases of fallen angel debt.

That would leave it staring at another red line – beyond which lies the broader junk market and lower, BB-rated credits.

“Are they (the ECB) willing to go all the way down below investment grade? I’m reluctant to say they are really going to go there,” said Iain Stealey, international CIO for fixed income at J.P. Morgan Asset Management.

“But if we are still working from home in three months it’s a completely different conversation.”

Additional reporting by Abhinav Ramnarayan in London and Francesco Canepa in Frankfurt; Editing by Sujata Rao and John Stonestreet

Fri Apr 24 , 2020
LONDON (Reuters) – Market gauges measuring euro break-up risk emanating from Italy are starting to flicker, flagging the risk that another existential crisis may be building for the euro zone. FILE PHOTO: The German share price index DAX graph is pictured at the stock exchange in Frankfurt, Germany, April 23, […] 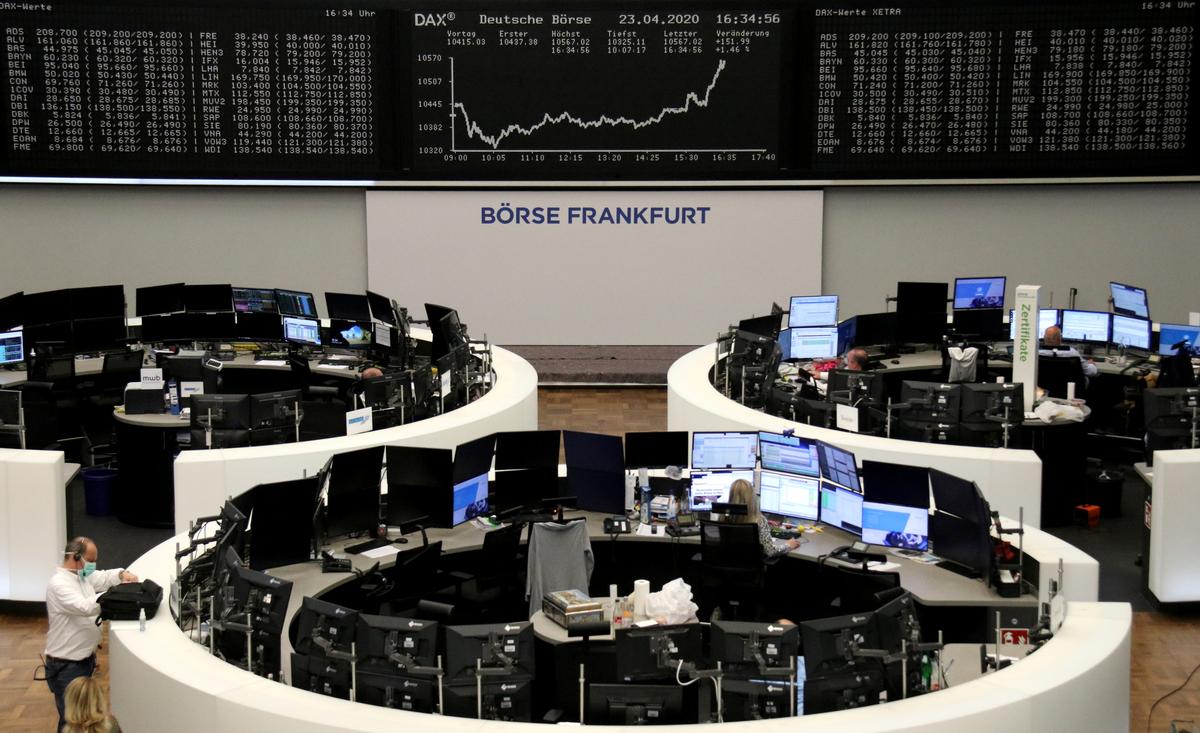