FRANKFURT (Reuters) – The European Central Bank tweaked policy around the edges on Thursday but kept the door wide open to further stimulus — including potentially controversial purchases of junk debt — to help an economy ravaged by the coronavirus pandemic.

Facing an unprecedented recession, the ECB said it would make loans to banks even cheaper but kept the terms of its hallmark asset purchase scheme unchanged, disappointing investors who had bet on even more money-printing.

Lockdowns in place across Europe to curb the spread of the virus have already cost millions their jobs and governments are borrowing record amounts just to keep their economies going until restrictions on businesses and households can be eased.

ECB President Christine Lagarde made clear the central bank for the 19 countries that use the euro currency would do its part but said political leaders must agree on more ambitious and coordinated action, a goal that has so far eluded them.

“The euro area is facing an economic contraction of a magnitude and speed that are unprecedented in peacetime,” Lagarde told a news conference held via webcast.

Speaking to an empty press room, Lagarde said the euro zone economy could shrink by 5% to 12% this year and may contract by 15% in the second quarter alone, a rate that would far outpace any decline during the global financial crisis a decade ago.

Having priced in bolder action, investors were clearly disappointed with the ECB’s small steps.

“The ECB’s failure to step up its asset purchase programmes at today’s monetary policy meeting will leave investors with nagging doubts about its commitment to underwrite government borrowing during the coronavirus crisis,” Andrew Kenningham at Capital Economics said.

“Eventually, however, the lack of joint fiscal action means the ECB will have to do so.”

As part of Thursday’s moves, the ECB said it would allow banks to borrow long-term funds for rates as low as minus 1% and it would set up a new shorter-term liquidity operation.

Even if markets were disappointed with the measures, Lagarde made clear the ECB would do its job, a signal that more action is coming, perhaps as soon as June.

She said the ECB could increase the size of its Emergency Pandemic Purchase Scheme (PEPP) and even extend it beyond 2020. When asked if the ECB could buy bonds below investment grade, she hinted at flexibility.

“We have been very clear … we will not accept fragmentation of monetary transmission in the euro area or any pro-cyclical tightening of financing conditions,” Lagarde said.

“With these two principles in mind, we will adjust as and when needed.”

The hint at future junk bond purchases is significant as Italy, the euro zone’s third-largest economy, is rated in the lowest investment-grade bracket and seen at risk of downgrades that could lose it access to ECB help just as it needs it most.

Letting go of Italy would be politically unacceptable, however and the ECB’s recent decisions to temporarily buy Greek debt and accept bonds recently downgraded to junk as collateral from banks were seen as a way of preparing the ground.

“The ECB is likely to decide in the end to buy Italian government bonds even if they were threatened to move to the junk sector,” Commerzbank economist Jörg Krämer said. “It is also possible to buy corporate bonds with junk status.”

Lagarde said policymakers had not discussed adding junk bonds to its regular asset purchases, but stressed the flexibility of the ECB’s tools and its willingness to deploy them, “full-fledged”.

She also sounded open to discussion about extending access to ECB funding to some non-bank financial firms — so-called shadow banks.

Figures earlier on Thursday showing the economy is shrinking faster than feared reinforced expectations of a bigger move by the ECB in June.

The euro zone economy shrank by 3.8% in the first quarter, only part of which was affected by the lockdowns, underperforming expectations for a 3.5% drop in GDP.

Inflation slowed to just 0.4%, far from the ECB’s target of almost 2%, and is set to drop into negative territory in the coming months as a result of the oil price crash.

Thu Apr 30 , 2020
(Reuters) – Berkshire Hathaway Inc’s (BRKa.N) annual meeting will be nothing like the extravaganzas of years past, but will give Warren Buffett a chance to show how resilient his cash-rich conglomerate may be to the coronavirus pandemic, and the investment opportunities it offers. FILE PHOTO: Berkshire Hathaway signs are displayed […] 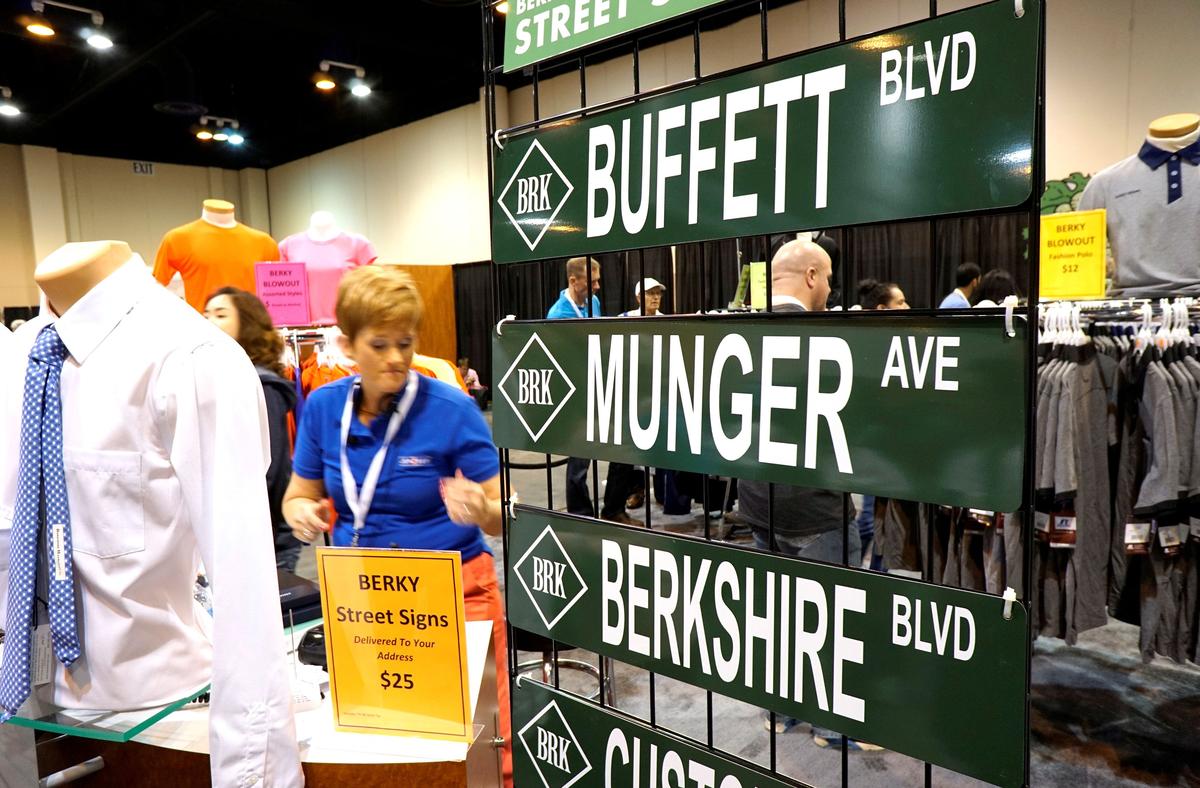