Ed Miliband has called on the UK government to step in to save the steel industry as part of a more “proactive” industrial policy in the teeth of the coronavirus crisis.

The intervention by Labour’s shadow business secretary and former party leader comes as Britain’s biggest steel producers — including Tata and Liberty — have been holding crunch talks with officials about emergency loans worth hundreds of millions of pounds.

Mr Miliband said he appreciated the steps taken by Rishi Sunak, the UK chancellor, to prevent a catastrophic depression in the coming months.

But he urged Mr Sunak to go further and faster to help beleaguered manufacturing companies such as Rolls-Royce to prevent “the decimation of our manufacturing base”.

Mr Miliband, who led Labour in opposition between 2010 and 2015, said the government should consider taking equity stakes in struggling companies in a move that could be permanent rather than temporary.

“The notion that the state just gets out of the way, and that will then make for success, has been buried by this crisis,” he said in an interview with the Financial Times.

“It’s legitimate to pursue strategic objectives. You can do it through loans, but there’s also a case for doing it through equity stakes.”

Asked whether those equity stakes should eventually be sold back to the market in line with the bank bailouts of 2009 — or kept by the state forever after the crisis — he replied: “We should be open-minded about that.”

Mr Miliband said the government needed to “go quicker” in its support for manufacturing, where order books had slumped and many workers had been furloughed. “We’ve seen real problems . . . and quite a big degree of hesitancy from the government,” he claimed.

“This crisis has reminded us of the importance of manufacturing as an economic security issue, a national security issue in relation to the pandemic and I’m struck that in Europe you had significantly swifter action,” he said. “Every worker that loses their job and every business that goes down at the moment makes the recession deeper and the recovery harder.”

The FT revealed this week that the Treasury is drawing up plans called “Project Birch” to handle bespoke bailouts of “viable companies which have exhausted all options”.

Mr Miliband, who was appointed shadow business secretary by Labour’s new leader Keir Starmer last month, said that steelmakers faced particularly pressing circumstances. “We welcome the news about Project Birch and hope that steel is a key priority for this programme,” he said.

He argued the government could alternatively change the rules further on its lending schemes to help short-term liquidity challenges facing manufacturing, particularly the steel industry — which was struggling even before the Covid-19 emergency.

Tata, the country’s biggest producer, could need a loan of close to £500m, according to Welsh Labour MP Stephen Kinnock, while Liberty and Celsa are understood to be hoping for smaller amounts.

Doing nothing to shore up the steel industry during the pandemic would “far outweigh” the cost of acting to secure the recovery, Mr Miliband said. “The cost of decommissioning the UK’s steel sites would run into billions for the taxpayer and thousands of workers would be forced into unemployment.”

Mr Miliband has promised that a Labour government would implement a “Green New Deal” to hasten the transition towards a low-carbon economy. He said interventions to help ailing manufacturers should be “conditional on climate objectives” as part of a strategic industrial policy.

Fri May 29 , 2020
A tweet by Donald Trump in which he quipped “when the looting starts, the shooting starts” amid violent protests in Minneapolis has been hidden for “glorifying violence” by Twitter. Twitter labelled the message with an explanation that while it had violated the platform’s rules, the post was going to remain […] 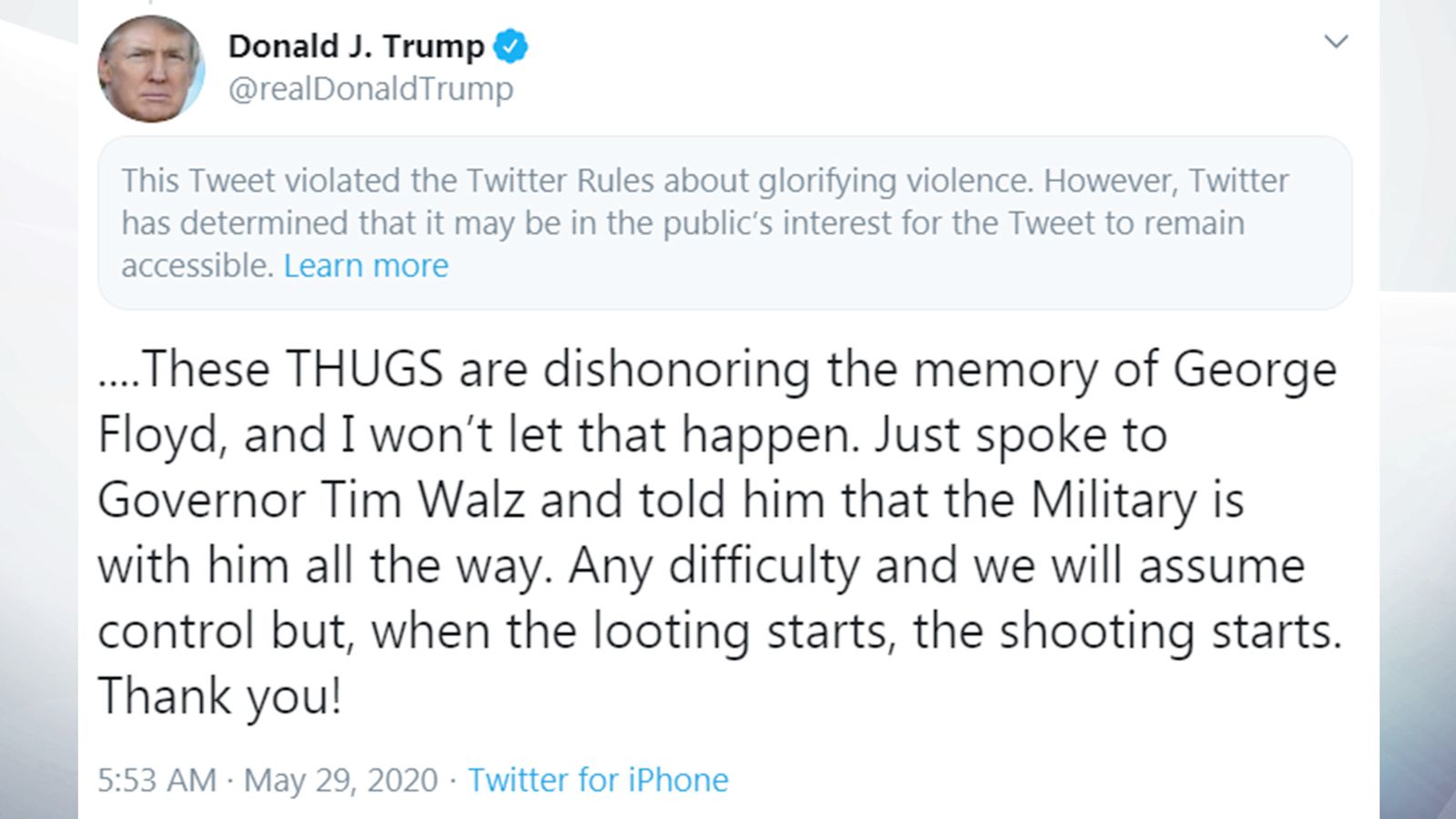