OAKLAND, Calif. (Reuters) – When a senior living facility in Amarillo, Texas suspected a nurse may have caught the novel coronavirus this month, it had a list within five minutes of staff and residents the nurse could have infected.

A photo illustration provided by CarePredict shows an individual wearing the company’s Tempo wearable wristband, which is being used in some U.S. senior care facilities for automated contact tracing. CarePredict/Handout via REUTERS

High-tech wristbands worn by The Legacy at Town Square’s 35 workers and 49 residents expedited contact tracing, the otherwise pain-staking process of interviewing patients to determine who crossed paths with them.

The nurse tested negative an hour later and Legacy did not have to isolate or test others. But its experience shows how wristbands and other wearables have emerged as tools to automatically record encounters between people at places that can mandate their use.

Facilities with quick contact tracing following infections in the coming months will be better positioned to ward off outbreaks and stay open, according to epidemiologists.

Australia, Singapore and other governments have sought to enable smartphones to record people’s contacts. But data privacy rules imposed by smartphone software makers Apple Inc and Alphabet Inc’s Google limit the utility of smartphone-based systems, while many employers do not let workers carry phones because of security and safety considerations.

Manufacturers are hawking wearables online priced as low as $4.

The Legacy in Texas uses technology from CarePredict, a startup that added contact tracing functionality to its system for elderly care homes when the pandemic struck.

CarePredict’s Tempo bracelets function as a call button to summon staff, a digital room key, and a health and activity tracker. More than 20 care facilities in the United States have the devices, which cost about $1 per day per user, according to CarePredict.

The wristbands use infrared light to connect to beacons on a wall in each room, creating a record of who has been near whom, where and for how long.

Walter said the system has proved accurate over the last two years for tracking residents’ activities at The Legacy, but its reliability in contact tracing is yet to be seen.

Setting up beacons and special-purpose devices like CarePredict’s Tempo may be too costly and complex for some facilities. But wearables that communicate with each other through Bluetooth signals may be more suitable, and software development company Myplanet and automaker Ford Motor Co are among those testing popular Bluetooth-based fitness trackers and smartwatches from companies such as Fitbit Inc and Samsung Electronics Co.

One of Myplanet’s experiments found that companies hoping to reduce costs and hassles by allowing workers to use existing gadgets will face connection challenges because of variances in the devices’ Bluetooth technology, said Greg Fields, who is leading the Toronto-based firm’s contact tracing efforts for its multinational clients.

Apple and Google soon plan to release contact tracing technology to smooth out some of the connection issues on phones, and device makers are confident that the tech giants will do the same for wearables, said David Su, CEO at Atmosic, a Silicon Valley-based wireless chip company.

A photo illustration provided by CarePredict shows an individual wearing the company’s Tempo wearable wristband, which is being used in some U.S. senior care facilities for automated contact tracing. CarePredict/Handout via REUTERS

The companies did not respond to requests for comment on the speculation. While Apple-Google technology would improve reliability in contact tracing, devices that use it would need access to the internet and a government-authorized contact tracing app.

Ford conducted a small test of pricey smartwatches that alert wearers when they are standing closer than guidelines allow, but they too require Wi-Fi, which is sometimes unavailable in sprawling plants, Ford manufacturing chief Gary Johnson told Reuters.

The automaker also is testing chips on identification badges, he said, and those could track sustained encounters or issue reminders to keep distance.

Tue May 19 , 2020
The coronavirus crisis has dealt a massive blow to the UK labour market. Figures released on Tuesday by the Office for National Statistics represent the first official estimates of the scale of the damage — even though there is still no reliable count of the number of people newly unemployed. […] 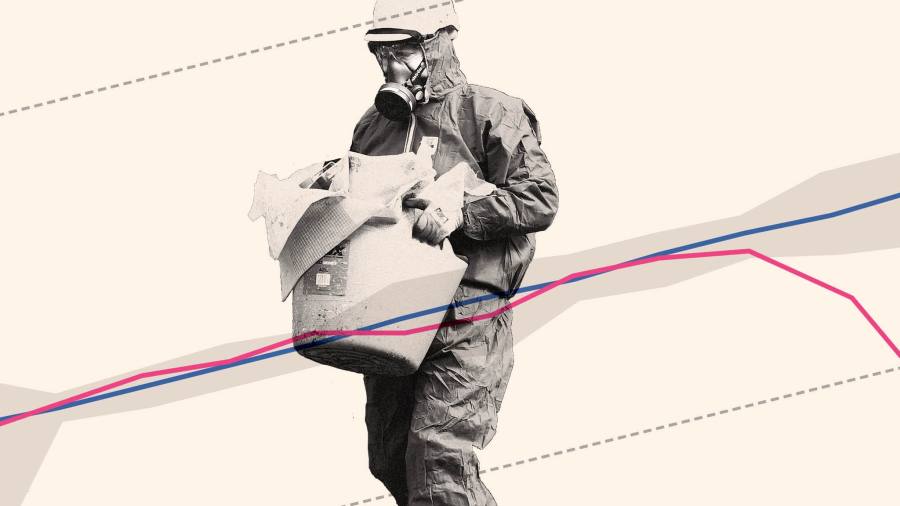