SAO PAULO (Reuters) – Boeing Co’s recently aborted $4.2 billion (3.3 billion pounds) agreement to buy the commercial jet-making operations of Brazil’s Embraer specifically forbade either party from calling it off because of a pandemic or a global economic recession, Reuters has found.

As the aviation industry grapples with its worst crisis in generations due to the coronavirus pandemic, analysts now say the deal’s contract backed Boeing into a corner when financial conditions worsened globally, pushing it to find a different exit route on the deal. Boeing says it backed out because Embraer failed to meet unnamed conditions.

Potential dealbreakers are often described in contracts as material adverse events. But Boeing and Embraer wrote out a laundry list in the contract signed in January 2019, which Reuters reviewed, of 10 conditions that would not qualify as the kind of material adverse events that could be a pretext for cancelling the deal. A pandemic and any changes to the global economy were among them.

On Wednesday, S&P lowered Boeing’s credit rating to just one notch above junk. Meanwhile, the U.S. planemaker announced it would lay off 16,000 people – close to the total number of workers Embraer employs – and that it had already drawn down its entire credit line and was working on a bond offering.

“We will be a smaller company for a while,” Boeing Chief Executive David Calhoun said on Wednesday after the planemaker disclosed quarterly results.

However, just days earlier, when Boeing called off its deal with Embraer, the U.S. planemaker did not mention adverse conditions within the company or the economy. Instead, it said its ex partner “failed to satisfy a number of important conditions in the contract.”

Boeing has not publicly disclosed what those conditions were, but sources told Reuters over the weekend that the U.S. planemaker raised objections about funding and legal matters.

Embraer says it did indeed meet all conditions and has taken Boeing to arbitration.

Either way, the contract says Boeing could have waived any unmet conditions on the part of Embraer, but the U.S. planemaker decided not to do so and canceled the deal instead.

Both Embraer and Boeing declined to comment on the contract.

“Boeing couldn’t afford this deal and they found a way to get out of their obligations,” said Scott Hamilton, a longtime aviation consultant at Leeham Company. “They just had to find a way to axe the deal and retain those $4 billion.”

Under the contract signed in January 2019, Boeing would have taken over Embraer’s commercial aviation unit, paying $4.21 billion for an 80% stake. At the time, demand for jets was soaring with no end in sight and Embraer was feeling the pinch of fighting against titans Boeing and Airbus as an independent planemaker.

The coronavirus crisis worsened in March and Boeing started openly discussing some form of U.S. government assistance, as it was also getting nearer to closing the Embraer deal. Several countries had granted antitrust approvals and Embraer had finished carving out its commercial aviation unit as well as built new headquarters for after Boeing’s takeover.

Besides “epidemics or pandemics,” and changes in the world’s economy, wars and natural disasters were also barred as reasons to cancel the deal.

Embraer’s market value fell by over two-thirds to $1 billion during the crisis, leading analysts to begin worrying that the deal would fall apart or at least be renegotiated.

“On an ordinary basis, Boeing would have repriced the deal,” Hamilton said.

But the contract banned Boeing from walking away due to “any change in the market price” of Embraer shares. Other conditions that would not allow Boeing to walk away included if Embraer’s credit ratings were downgraded or if it failed to meet its own revenue or earnings forecasts.

It is unclear who requested that the contract be this restrictive.

Reporting by Marcelo Rochabrun in Sao Paulo; Additional reporting by Tim Hepher in Paris, Tracy Rucinski in Chicago and David Shepardson in Washington; Editing by Christian Plumb and Andrea Ricci

Thu Apr 30 , 2020
Boris Johnson was breathless, his face etched with the strain of fighting a personal bout of coronavirus, but he was determined to project optimism, insisting the country was about to exit a long Alpine tunnel with “the sunlight and pasture ahead of us”. The prime minister on Thursday promised a […] 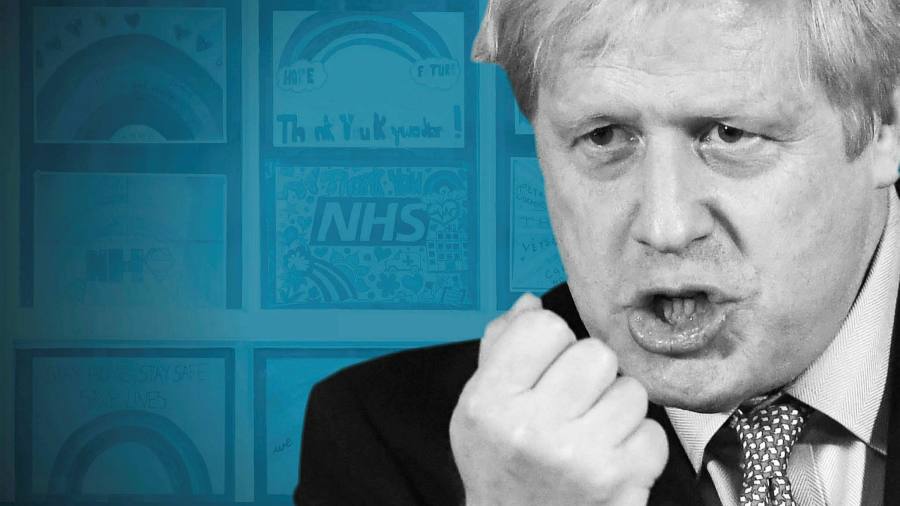