LONDON (Reuters) – England tentatively began easing its coronavirus lockdown on Wednesday, with some people who cannot do their jobs at home urged to return to work, as stark economic data showed the disastrous impact of the pandemic.

Commuters, some wearing masks are seen at Canning Town station, following the outbreak of the coronavirus disease (COVID-19), London, Britain, May 13, 2020. REUTERS/Henry Nicholls

The worst-hit country in Europe with more than 40,000 deaths from COVID-19 according to official data, Britain has been in extensive lockdown since March 23. As of Wednesday morning, people in manufacturing and certain other sectors were being asked to return to work if they could.

GDP data released on Wednesday showed the economy shrank by a record 5.8% in March compared with February, and the April data is likely to be even worse as the country was under lockdown for the entire month.

The government is loosening restrictions very gradually, for fear of triggering a second peak of infections. Prime Minister Boris Johnson has described the process as a “supremely difficult” balancing act.

Scotland, Wales and Northern Ireland, which have semi-autonomous governments, are sticking with a “stay at home” message for now, leaving England, the most populous UK nation, to take the lead in sending some people back to work.

The government has faced a barrage of criticism that its new guidance – Stay alert, control the virus, save lives – was confusing. Appearing on Sky News TV, transport minister Grant Shapps was asked why estate agents were being allowed to restart house viewings when people could not have their own relatives to visit.

“The truth of the matter is, you have to start somewhere. The lockdown message was very straightforward – it was just stay at home. Now as we start to unlock, of course, there have to be decisions made,” Shapps said.

“There is no perfect way of doing this, and we’d ask people to use their common sense … Right now, there has to be a cut-off somewhere.”

Workers were being advised to avoid public transport if at all possible, and schools remained closed, prompting questions about how parents and people who could not get to work by other means were supposed to apply the new guidance.

Employers faced the daunting task of creating safe environments for their staff, with detailed guidance on one-way systems at entry and exit points and in stairwells, spacing out workstations and other minutiae.

For those still working from home or unable to work, there was only a very slight change in the regime. People were now allowed out to exercise more than once a day, and two people from separate households were allowed to meet outdoors as long as they kept 2 metres apart.

Martin Hewitt, chairman of the National Police Chiefs’ Council, said officers would still be encouraging people to go home if they were out for reasons other than the authorised exercise, shopping for essentials, health or work.

Fines for transgressions have been increased.

“Everybody will carry on hopefully working in the spirit we’ve had for the last seven weeks,” he told BBC TV.

“It’s not for the police to police people being 2 metres apart, that’s about everyone’s individual responsibility. If there are those people who refuse to abide by the new regulations then we will move to enforcement if that’s what we have to do,” he said, describing that as a last resort.

Wed May 13 , 2020
LISBON (Reuters) – As reservation calendars at Portugal’s 90,000 holiday homes were wiped clean amid the coronavirus outbreak, councils in its biggest cities swooped in with offers to rent up to 2,000 properties to sublet as low-cost housing. FILE PHOTO: A man wearing a face shield walks the street as […] 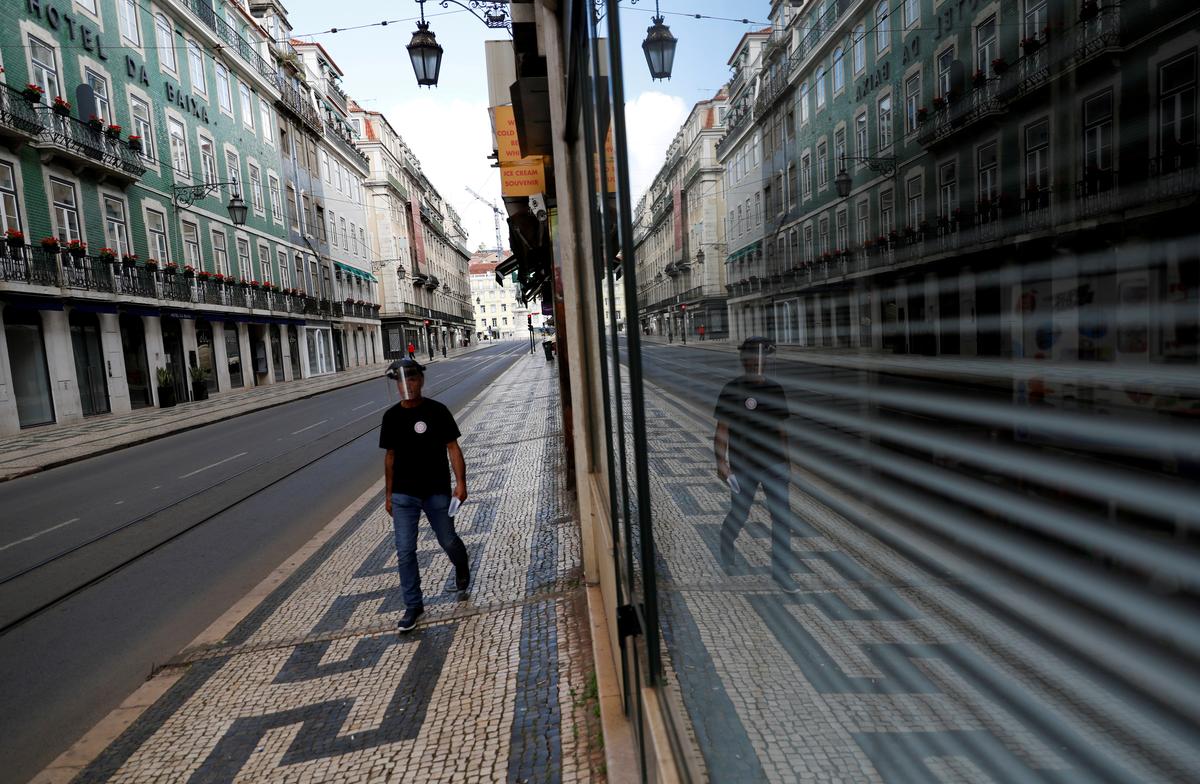