With the EU’s Brussels headquarters under lockdown – along with most of Europe – the 27 leaders held a four-hour video conference to consider proposals, rallying around a bigger common budget for 2021-27 with a recovery programme.

At around 1% of the EU’s economic output, the multi-year common budget has long been one of the most contentious subjects of debate for its members. Expanding it will not be easy, even if Italy’s Prime Minister Giuseppe Conte hailed “great progress” after the summit ended.

French President Emmanuel Macron said differences continued between EU governments over whether the fund should be transferring grant money, or simply making loans.

“I’m saying this sincerely: if Europe raises debt to loan to others, that won’t live up to the response we need,” he said, adding that it would saddle already heavily-indebted countries, such as Italy, Belgium and Greece, with yet more debt.

Europe is facing a severe economic shock from the spread of COVID-19, the respiratory disease caused by the novel coronavirus, which has also led to border closures across the bloc and left member states fighting over medical supplies.

European Central Bank Governor Christine Lagarde told the leaders the pandemic could cut between 5% and up to 15% of euro zone economic output, officials and diplomats said.

The euro zone’s economic growth for 2020 is forecast to contract 5.4%, which would make it the worst year since the common currency was introduced in 1999, according to a Reuters poll. That is still better than the International Monetary Fund’s latest forecast for a decline of 7.5%.

After weeks of squabbling, the leaders approved half-a-trillion euros worth of an immediate rescue scheme to protect jobs, businesses and offer cheap credit to governments.

But with Italy and Spain hit far harder than Germany by the crisis, old enmities have surfaced across the bloc. Reaching agreement among euro zone finance ministers two weeks ago on the smaller euro rescue scheme was torturous, as the Netherlands refused an Italian demand to issue common debt.

Conte told leaders that a recovery fund should be 1.5 trillion euros in size and provide grants to EU governments to stop countries heading towards economic collapse and thereby threatening the viability of the bloc’s internal market.

“Grants are essential,” Conte said, according to diplomats who were on the video conference. “The sanitary emergency has quickly become a social emergency. But now we are facing a political emergency as well.”

Austria’s Chancellor Sebastian Kurz took the opposite view, saying on Twitter that, while Vienna was ready to show solidarity, “we should do this through loans”.

Kurz said he would coordinate with “like-minded countries”, a reference to wealthy but cautious northern countries such as Denmark, Sweden, Finland and the Netherlands, who resent having to pay for poorer southern countries they see as fiscally irresponsible.

Spain, one of the world’s worst hit countries, backs Italy’s view that a fund must issue grants, rather than loans, while France has argued for a fund that could issue common EU debt, hoping its temporary nature will calm passions.

German Chancellor Angela Merkel took a conciliatory stance as she publicly called for a major recovery fund after the summit. “Things can only go well for Germany if they go well for Europe,” she said.

Leaders tasked the European Commission, the EU executive, to present detailed proposals by May 6, diplomats said.

Commission President Ursula von der Leyen said EU countries had so far handed out state aid worth 1.8 trillion euros to cushion the economic hit and that the new recovery fund would be in the order of magnitude of a trillion euros.

She said the solution was to increase the amount that each EU government would be liable to pay into a recovery fund if needed, raising it to 2% of gross national income (GNI), from 1.2% today. GNI is the EU’s preferred measure of economic output.

Most significantly, that means an implicit guarantee needed from EU governments for the Commission to issue bonds, a kind of “contingent liability”.

The Commission has a triple-A credit rating, issuing against the security of the next EU long-term budget.

“We are slowly heading towards some form of joint debt. We’ll never call it ‘coronabonds’ or ‘eurobonds’ and it will be raised by the Commission, rather than member states together,” said a senior EU diplomat involved in the summit.

Fri Apr 24 , 2020
U.S. Speaker of the House Nancy Pelosi (D-CA) wears a face mask as she walks to the House Chamber ahead of a vote on an additional economic stimulus package passed earlier in the week by the U.S. Senate, on Capitol Hill in Washington, U.S., April 23, 2020. REUTERS/Tom Brenner WASHINGTON […] 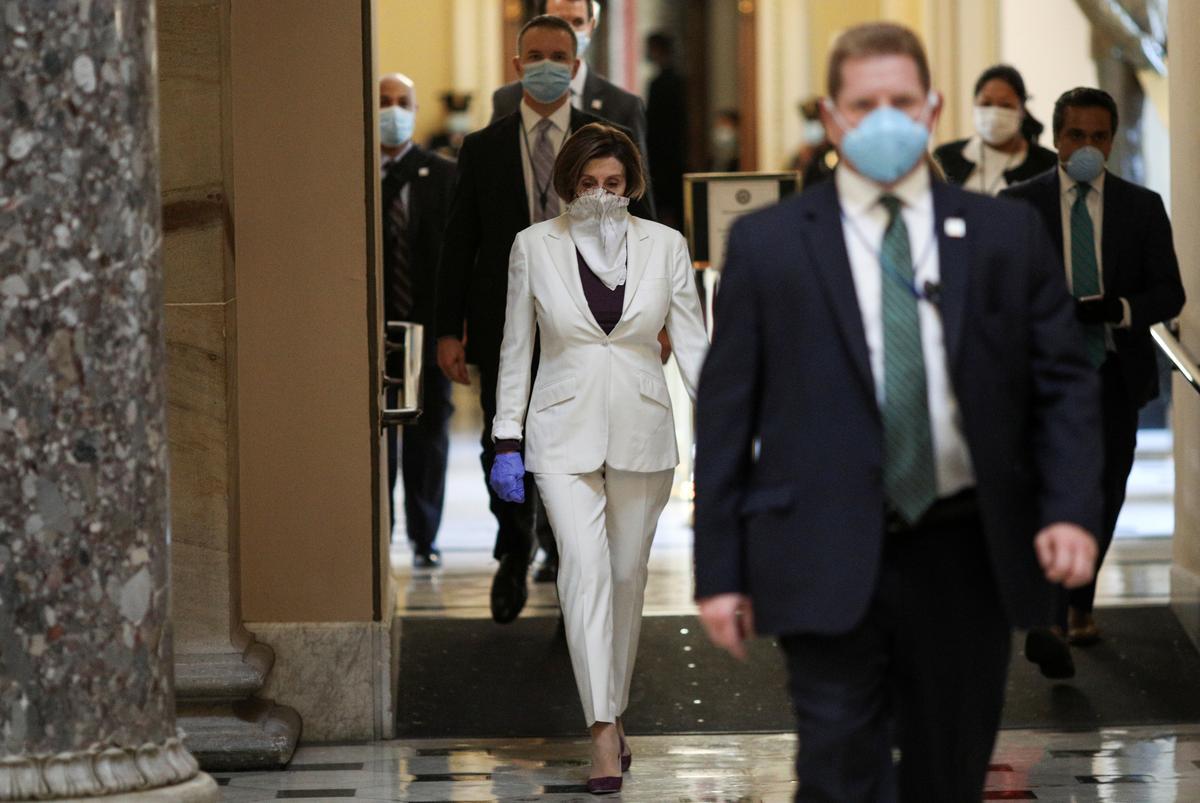