The EU will enforce full customs and regulatory checks immediately after Brexit and will not reciprocate the UK’s plan for a temporary light touch border on the British side of the English channel, a senior Brussels official warned on Friday.

Maroš Šefčovič, a vice-president of the European Commission who co-chairs a EU-UK committee implementing the Brexit withdrawal agreement, said that while the UK border was a matter for the British government, the bloc would robustly maintain its equivalent.

The British government on Friday proposed a temporary light touch border regime for goods flowing into the UK from the EU, as ministers sought to ease the burden on companies following the coronavirus crisis.

But Mr Šefčovič indicated goods heading into the EU from the UK would face full customs and regulatory checks.

“I can assure everyone that the EU will continue to fully protect the integrity of the single market and customs union as well as its financial interest,” he said, after the UK formally confirmed it would not seek to extend the Brexit transition period beyond December.

Businesses need the two sides to knuckle down and agree a deal. Otherwise companies will have to spend cash they don’t have preparing for a ‘no deal’ scenario.

The EU approach emerged as the UK provided details about how it will phase in new border controls over a six-month period from January, in order to help companies adjust to new trading arrangements as Britain leaves the bloc’s single market and customs union.

Under the UK plan, companies importing from the EU into the UK from January 1 will have up to six months to complete customs declarations, with duty payments deferred until the paperwork has been done.

Businesses importing products of animal origin, like eggs or honey, will not need to provide the authorities with advance notifications and relevant health documentation until April 1.

Traders will have until July 1 before they need to make customs declarations and tariff payments at the time of point of entry into the UK, with further compliance checks to be conducted at inland border control posts.

The phased approach to the new UK border regime was given a qualified welcome by business lobby groups which have been demanding more time to prepare for Brexit.

However there were warnings that a huge amount of work remained to be done in a very short period.

Richard Burnett, chief executive of the Road Haulage Association, said it was pleasing to see the government engaging “intensively” with businesses’ concerns, but warned even with the proposed easements, companies would face a significant paperwork burden.

The additional £50m for training customs agents, while welcome, fell short of what was needed to cover the costs of businesses already strapped for cash as a result of the coronavirus crisis, he added.

Anna Jerzewska, a trade consultant, said it remained unclear how easily companies would be able to take advantage of the government’s proposed light touch border regime.

“It is important to note that the procedure only delays the obligation to submit a full customs declaration,” she added. “It doesn’t remove it. Therefore, the additional administrative and cost burden for the private sector doesn’t actually change.”

The British Chambers of Commerce warned that with the UK and the EU still far apart in negotiations on a future relationship, businesses needed rapid moves towards a compromise in order to avoid a no-deal Brexit that would be hugely costly for both sides.

“Businesses need the two sides to knuckle down and agree a deal,” said Adam Marshall, the BCC director-general. “Otherwise companies will have to spend cash they don’t have preparing for a ‘no deal’ scenario.”

Fri Jun 12 , 2020
Ministers and Conservative MPs are turning up the heat on Boris Johnson to cut the two-metre distancing rule after official figures showed Britain’s economy crashed by a record 20.4 per cent in April. There are concerns that a full-throated recovery is out of reach until there is a proper reopening of […] 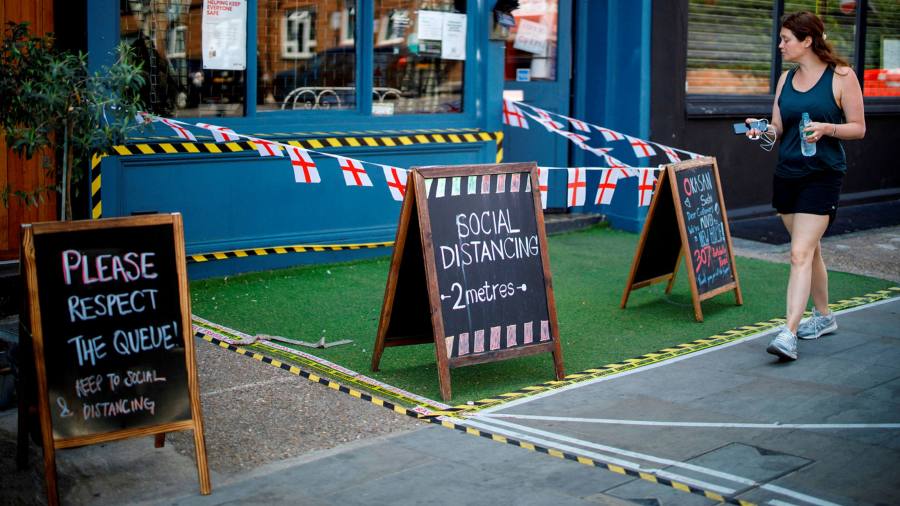