BRUSSELS (Reuters) – Divided European Union leaders began their search on Thursday for a joint financial fund of up to 2 trillion euros (1.75 trillion pounds) to help recover from the coronavirus pandemic and avoid economic collapse in the bloc’s poorer south.

With the EU’s summit building under lockdown – along with most of Europe – the 27 leaders met via video conference to consider proposals including a bigger common budget, giving grants to stricken economies, or selling bonds together to raise funds.

Europe is facing a severe economic shock from the spread of COVID-19, the respiratory disease caused by the novel coronavirus, which has also led to border closures across the bloc and left member states fighting over medical supplies.

European Central Bank Governor Christine Lagarde told the leaders the pandemic could cut between 5% and up to 15% of their economic output, a diplomatic source said.

A Reuters poll this week showed that the euro zone’s economic growth for 2020 was forecast to contract 5.4%, which would make it the worst year since the common currency was introduced in 1999. That is still better than the International Monetary Fund’s latest forecast for a decline of 7.5%.

Mario Centeno, who will address EU leaders as head of the euro zone finance ministers, said huge regional divergences because of the crisis would be “poisonous for our democracies”.

“We are only as strong as our weakest member,” Centeno, who is Portuguese, said in a video before the summit. That message was echoed by European Parliament President David Sassoli, who said the bloc needed to avoid a “disastrous spiral”.

“We need to make sure that we emerge with a stronger version of Europe, with a stronger sense of community,” he said after briefly joining leaders at the start of their meeting.

But with Italy and Spain hit far harder than Germany by the crisis, old enmities have surfaced across the bloc. Reaching agreement among euro zone finance ministers two weeks ago on a 500 billion euro rescue scheme was torturous, as the Netherlands refused an Italian demand to issue common debt.

This time, senior EU diplomats said there was consensus that a recovery fund needed to be large enough to meet the challenge of a pandemic that will shrink economies.

Finland’s Prime Minister Sanna Marin told the country’s main business daily Kauppalehti that Finland, which along with Austria, Germany and the Netherlands is against joint debt, is “open and constructive about the debate on the stimulus fund”.

But leaders are unlikely to reach a deal on Thursday, facing a rancorous debate on how much money is needed, how to raise it, how to spend it, to what extent governments would be responsible and what maturities any joint debt might have.

Spain, the world’s second most affected country after the United States, says it wants a 1.5 trillion euro coronavirus recovery fund to award grants, rather than loans, while France wants a fund that could issue common EU debt.

France has sought to ease opposition in Germany and the Netherlands to the joint issuance of debt by proposing a temporary recovery fund strictly focused on future investments.

EUROBONDS BY ANOTHER NAME?

An internal Commission note prepared for Thursday’s summit showed it was proposing to produce 2 trillion euros of spending and investment through the EU’s 2021-2027 joint coffers and a recovery fund.

If agreed, the Commission would release most of the spending in 2021-22 as a mix of free grants and repayable loans after issuing bonds against guarantees the 27 EU member states would agree for their joint budget.

The Commission will be asked to make more specific proposals around May 6 and the bloc’s leaders could have another discussion on that in June.

Any final decision may take even longer, because of the complexity of talks over the EU budget, called the Multi-annual Financial Framework (MFF), and bitter divisions in the bloc over the scale and scope of the necessary recovery financing.

Some saw a silver lining in the crisis, arguing that the adage of further European integration through crisis held true.

“We are slowly heading towards some form of joint debt. We’ll never call it ‘coronabonds’ or ‘eurobonds’ and it will be raised by the Commission, rather than member states together,” said a senior EU diplomat involved in preparing the summit.

“There will be plenty of fights ahead to nail it down. But we are moving into a territory that would have been beyond the pale before the coronavirus crisis.”

Thu Apr 23 , 2020
DIY chain B&Q has reopened about half of its UK stores – joining a number of companies trying to get back to work despite the lockdown. B&Q had closed all its stores in March as restrictions designed to combat the spread of COVID-19 came into force, but after a trial […] 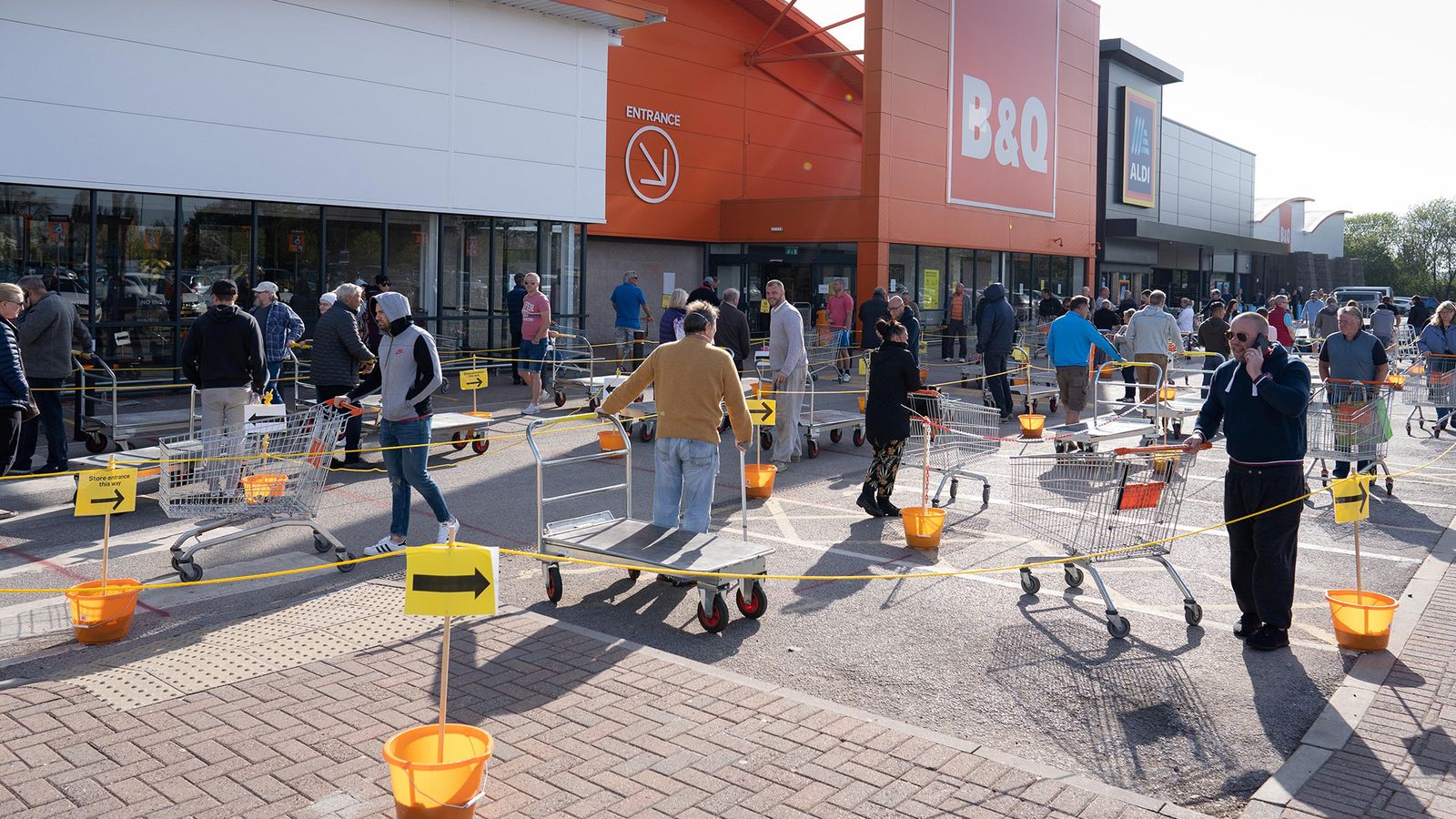