LONDON (Reuters) – Manufacturing activity in the euro zone collapsed last month as government-imposed lockdowns to stop the spread of the new coronavirus forced factories to close and consumers to stay indoors, a survey showed on Monday.

The coronavirus has infected more than 3.5 million people globally and killed around 247,000 so with citizens told to stay at home economic activity has plummeted and supply chains have been massively disrupted. [nL4N2AY3AS]

IHS Markit’s final Manufacturing Purchasing Managers’ Index (PMI) for the euro zone sank to 33.4 from March’s 44.5, its lowest since the survey began in mid-1997, below an earlier flash reading of 33.6 and significantly below the 50 mark separating growth from contraction.

An index measuring output, which feeds into a composite PMI due on Wednesday and seen as good indicator of economic health, sank to a survey low of 18.1 from 38.5.

“Euro area manufacturing output plunged to an extent greatly exceeding any decline previously seen in the near 23-year history of the PMI survey in April, reflecting a combination of factors including widespread factory closures, slumping demand and supply shortages, all linked to the COVID-19 outbreak,” said Chris Williamson, chief business economist at IHS Markit.

The slump came despite the European Central Bank easing policy and ramping up its quantitative easing programme alongside unprecedented amounts of fiscal stimulus from governments to help an economy ravaged by the pandemic. [nL3N2C11C3]

With shops closed and consumers concerned about their health and employment prospects, demand sank last month to by far the lowest in the survey’s history. The new orders PMI came in at 18.8, almost half March’s already weak reading of 37.5.

Scant demand forced factories to cut prices, reduce headcount at one of the sharpest rates on record and complete backlogs of work to stay active. Unsurprisingly, optimism was at a survey low.

While some countries have begun to ease lockdown measures, offering some hope for a rebound this month, IHS Markit cautioned any pick up would be modest.

“Steps needed to keep workers safe will mean even businesses that are able to restart production will generally be running at low capacity, and most will be operating in an environment of greatly reduced demand,” Williamson said.

– Detailed PMI data are only available under licence from IHS Markit and customers need to apply for a licence.

Mon May 4 , 2020
FILE PHOTO: Employees of German car manufacturer Porsche work on a Porsche 911 at the Porsche factory in Stuttgart-Zuffenhausen, Germany, February 19, 2019. REUTERS/Ralph Orlowski/File Photo BERLIN (Reuters) – German factory output shrank at the fastest rate on record in April and firms in the export-oriented sector cut jobs at […] 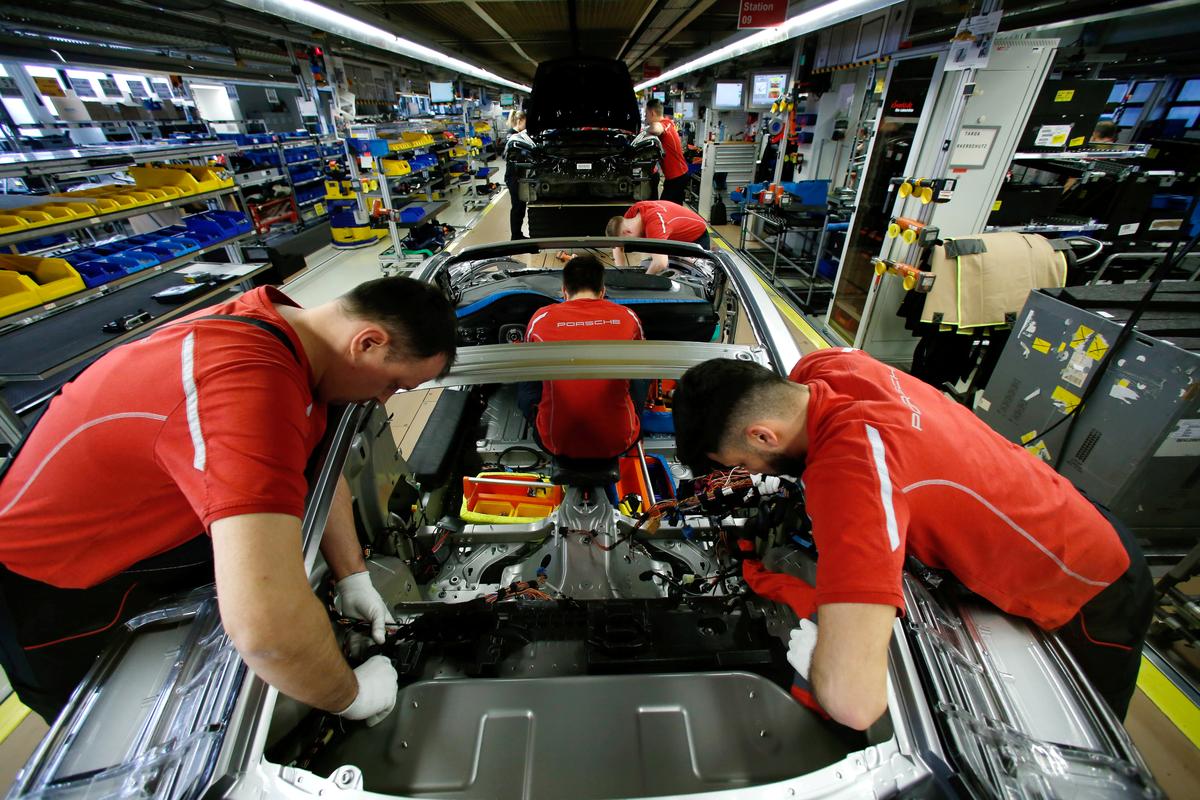