A former chief executive of Imagination Technologies has warned the government that a state-owned Chinese investor is using “COVID cover” in a bid to seize control of the British chip developer.

Sky News has learnt that Sir Hossein Yossaie, who ran the company until 2016, has written to ministers at the Department for Digital, Culture, Media and Sport to urge them to intervene to prevent Imagination’s redomiciling.

Sir Hossein, who is now an angel investor, also demanded that the government step in to force the reinstatement of Ron Black, who quit as Imagination’s chief executive late last week.

The latest development in the escalating political row over China Reform Holdings’ attempts to gain control of the Hertfordshire-based supplier to Apple comes days after Sky News revealed that the Trump administration has begun investigating the situation.

Sir Hossein told ministers that he suspected that “the Chinese actions are heavily or even totally political and even suggest they thought they can use COVID cover and do their deeds whist our government is dealing with that crisis”.

“This suggests their long-term intentions are not good and very self-centred.”

He added that senior executives from unnamed Imagination customers had contacted him in recent days to express concern at China Reform’s move to nominate four directors to Imagination’s board, allowing it to take control of the company.

“For that reason I recommend that the UK government intervene again and do so quickly and forcefully,” he added.

Last week, two other top executives resigned from the company in protest at China Reform’s plot.

Steve Evans, chief product officer, wrote in his resignation letter: “China Reform have clearly set out to take control of the business for reasons best known to themselves, and I will not be part of a company that is effectively controlled by the Chinese government.”

Last week’s emergency board meeting convened to approve the China Reform nominees was called off following enquiries by senior MPs concerned about the redomiciling of prized British intellectual property.

Ray Bingham, Imagination’s chairman and now interim chief executive, is understood to be trying to convince Mr Evans and John Rayfield, who resigned as chief technical officer, to remain with the company.

Mr Rayfield is understood to have said in his resignation letter that China Reform’s move would undermine Imagination’s ability to do business in the US.

Last Friday, Imagination issued a statement containing news of Mr Black’s departure and saying that its shareholders were committed to increasing the chip designer’s investment in the UK.

It was, however, short on detail about safeguards to ensure that it would remain a UK-headquartered company.

Without guarantees that Imagination’s stewardship would remain free from interference from China Reform – which has close links to Beijing – it appears unlikely that the executives who have quit would overturn their decision.

When Sky News revealed details of China Reform’s plot to take control of Imagination ten days ago, one insider said that the move appeared to have been timed at “the point of maximum distraction” for ministers dealing with the coronavirus pandemic.

Since then, Oliver Dowden, the culture secretary, has told MPs that the government is urgently seeking clarity about the situation amid concerns about the pace of ‘technology transfer’ to China.

He said that officials were “working with their counterparts in the departments for Business, Energy, and Industrial Strategy, the National Cyber Security Centre, the Foreign Office, and Cabinet Office as a matter of urgency to understand the facts”.

Mr Dowden added that he was seeking an “urgent meeting” with Mr Bingham, and that the government remained committed to legislation “to give the government further powers to scrutinise foreign transactions in the form of the National Security and Investment Bill”.

The intervention by Committee on Foreign Investment in the US (CFIUS) comes two-and-a-half years after it blocked Canyon Bridge’s takeover of Lattice Semiconductors in 2017.

Imagination boasts that its graphics processing units (GPUs) are used in 30% of the world’s mobile phones and, in total, 11 billion devices globally.

The foreign affairs select committee has launched a separate inquiry into “foreign asset-stripping of UK companies”, which comes in the wake of the government’s decision to give Huawei, the Chinese telecoms equipment manufacturer, a role in the construction of Britain’s 5G network.

Tue Apr 14 , 2020
SHANGHAI (Reuters) – Apple Inc shipped roughly 2.5 million iPhones in China in March, a slight rebound after one of its worst months in the country ever, according to government data published on Friday. Smartphone companies are hoping for a strong recovery in demand in China, where the deadly coronavirus […] 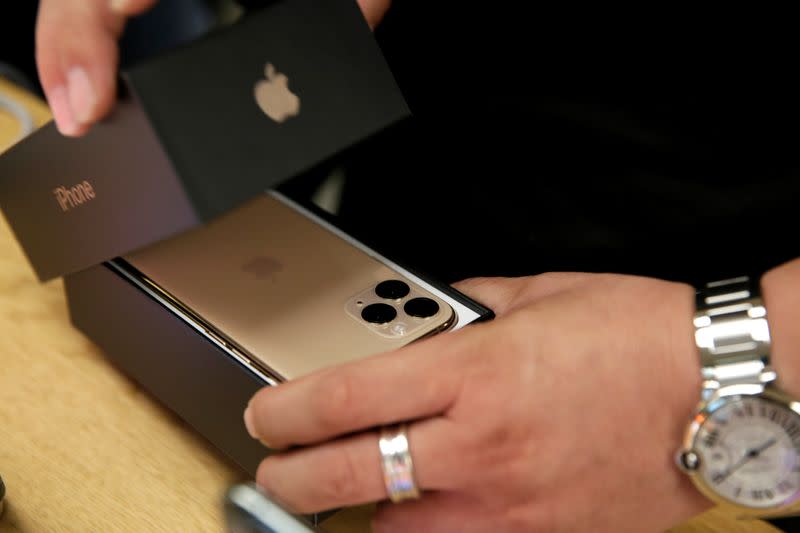