Manufacturing food for sale in Northern Ireland will become “unviable” for many British foodmakers when a new regulatory border comes into force between the region and Great Britain next year, the industry’s leading trade body warned on Monday.

Calling on the government to provide clarity to the industry, the Food and Drink Federation said the cost of complying with new checks after the Brexit transition ends on December 31 — including veterinary certificates costing up to £800 and EU labelling requirements — would be too much for many of their members.

“The proposed framework of complex regulations, certifications and checks will make trading between the two markets difficult and unviable for many manufacturers post-transition,” said Ian Wright, the chief executive of the FDF.

Trade groups have warned that meeting these bureaucratic requirements — which will apply whether or not the UK strikes a “zero tariff, zero quota” trade deal with the EU — could cost several thousand pounds for a container of mixed supermarket products.

The government, which is still in negotiations with Brussels on how the Irish protocol will be implemented in practice, is lobbying for a light-touch approach, including a “trusted trader” scheme to lighten the burden for supermarkets.

However Mr Wright said similar help was needed for smaller convenience store retailers, the hospitality trade and food ingredient manufacturers which supplied the remainder of the retail and wholesale market in Northern Ireland.

“Food and drink manufacturers — and our shoppers — deserve answers from the government on how and when these trade frictions are to be removed or handled,” he added.

“Put quite simply, if further clarity or support to overcome these barriers is not provided we will begin to see manufacturers pausing movements of goods into Northern Ireland come the new year.”

The industry has warned that the costs of ensuring goods comply with EU regulations are a far greater concern to business than whether or not tariffs need to be paid on goods entering Northern Ireland.

And while the government has announced a £200m Trader Support Service that will help businesses fill out customs paperwork free of charge, it will not absorb the greater cost of purchasing certificates and hiring staff to ensure that data provided are accurate.

Some FDF members have indicated they are planning to stockpile non-perishable goods in Northern Ireland ahead of the December 31 deadline and then take a view on whether it is commercially viable to continue to supply Northern Ireland. “The expectation is that many will not,” said one industry insider familiar with the discussions.

Aodhán Connolly, director of Northern Ireland Retail Consortium, said that both the EU and the UK urgently needed to “make a move” to provide businesses with some certainty before the new rules come into force in January.

He said the combination of a “zero tariff” free trade agreement along with exemptions from some EU rules for products that were part of an established, auditable supply chain were essential to making the Protocol work in practice.

The consortium estimates that some 70 per cent, by value, of all goods sent from Great Britain to Northern Ireland ended up on retailers’ shelves, with a failure to implement the protocol leading to higher prices and less choices for Northern Ireland consumers.

“This isn’t just about GB-NI, this is now existential for many Northern Ireland businesses, we’ve had businessmen in tears, wondering if they will still be in business in January,” Mr Connolly added. “We need to see movement from both sides very, very soon.”

The UK’s Cabinet Office had not returned a request for comment at the time of publication.

Mon Sep 28 , 2020
Boris Johnson ordered urgent peace talks with Conservative rebels on Monday as anger grows over new coronavirus restrictions and claims that ministers are springing new laws on the country “by decree”. Mr Johnson attempted to head off a rebellion by more than 50 Tory MPs, as the government announced tougher […] 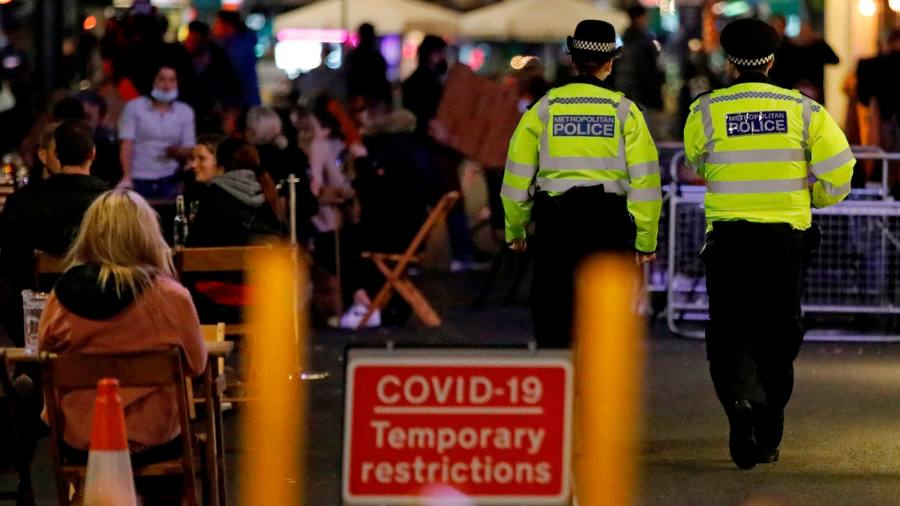