The dollar inched lower on Tuesday, but gains in riskier currencies were capped as traders fretted about company earnings and braced for Chinese trade data likely to show the sweeping impact of the coronavirus health crisis on economic activity.

The Australian and New Zealand dollars held on to overnight gains but so did the safe-haven Japanese yen, highlighting investor uncertainty about the outlook.

Hints that the virus may be peaking in the U.S., where states are beginning to plan for re-opening, and in retreat elsewhere are accompanied daily by dire economic reports.

“February data was a bit meaningless, but March is partly useful..anywhere you get current March data, or later, it’s going to be the thing.”

The Chinese yuan held at 7.0540 per dollar in offshore trade, firmer than the three-week low of 7.0370 hit on Good Friday.

Economists polled by Reuters are expecting a slump in Chinese exports to have continued last month and forecast a 14% drop compared with a year earlier, as global demand dived amid lockdowns and business closures around the world.

The grim trade report is likely to reinforce views that China’s economy sharply contracted in the first quarter for the first time since at least 1992.

New Zealand’s Treasury Department also released a suite of five possible scenarios for the future of the national economy on Tuesday. All of them forecast a deep contraction in the June quarter.

“What is clear is that whatever path the global and domestic economies follow, the effects of this recession will be severe and long lasting,” the department’s report said.

That is only likely to heighten investors nerves ahead of the start, later on Tuesday, of a dour U.S. earnings season, beginning with J.P. Morgan and Wells Fargo.

Though volatility-boosted trading earnings may deliver a silver lining for the banks, earnings for S&P 500 firms are expected to tumble 10.2% in the first quarter, compared with a Jan. 1 forecast of a 6.3% rise.

Tue Apr 14 , 2020
Labour leader Sir Keir Starmer has launched an inquiry into an apparent leak of a report into allegations of anti-Semitism in the party. The move comes after revelations that a party investigation claimed to have found “no evidence” of anti-Semitism complaints being handled differently to other forms of complaint. Former […] 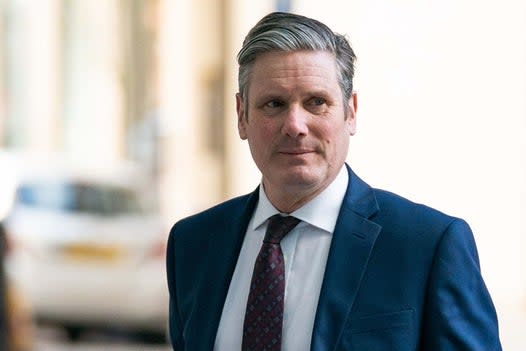