A huge shock is unfolding in the UK labour market. Official figures published on Tuesday show that almost three million people are claiming unemployment benefits; while more than 600,000 have dropped out of payroll employment and more than 100,000 out of self-employment since the start of the lockdown. Pay has fallen in real terms and hiring has collapsed, with vacancy numbers at an all-time low in May.

Yet the Office for National Statistics’ headline measure of unemployment remains unchanged, averaging just 3.9 per cent over the three months to April — much better than expected and clearly at odds with the scale of the slump in economic activity.

Here are the main conclusions that can be drawn from the data.

The job retention scheme has been crucial

More than 9m workers had been furloughed by their employer when the scheme closed to new joiners last week, according to the latest figures from HM Revenue & Customs.

The job retention programme is the main reason employment has not fallen much more sharply as a result of the crisis. It has driven the abrupt fall in average working hours — which the ONS said were down almost 9 per cent quarter on quarter. With furloughed employees receiving 80 per cent of regular pay, unless their employers top up wages, the programme is also a factor (along with lower bonuses) in the drop in average total pay, which fell 0.8 per cent in real terms between April and May, following a 1.5 per cent fall the previous month.

“One of the defining features shaping medium term economic recovery prospects will be how many furloughed workers return to their jobs and how many are jobless once the job retention scheme is wound down in October,” said Philip Shaw, economist at Investec, the investment bank.

The number of people claiming out of work benefits climbed to 2.8m in May – a jump of more than 1.5m since March​ – suggesting that unemployment is already approaching levels last seen in the 1980s recession.

This claimant count is likely to overstate the level of unemployment: it will include some people working with reduced hours and pay, and some with unchanged circumstances claiming after eligibility criteria were relaxed. However, it points to the scale of the crisis that is now unfolding.

The Resolution Foundation, a think-tank, said it “reinforced the likelihood that Britain is on course for the biggest jobs crisis for at least a quarter of a century”.

A more concrete sign of job cuts is the fall of 430,000 in employment between March and April, with real time data gathered by HMRC showing that a further 160,000 workers fell off employers’ payrolls in May.

Many people are not yet searching for work, with a rise in inactivity matching the fall in employment — and this has probably masked the true rise in unemployment.

The priority for ministers is to avert a surge in long-term unemployment. What really matters is how many people return to work as the economy reopens and how many jobs become available in new areas to replace those lost in sectors that are shrinking, such as tourism.

In this context, the collapse in hiring — with vacancies down by a record 60 per cent between March and May — is one of the most worrying signs in the data, even if the ONS’s more timely tracking of online job adverts suggest that hiring has started to pick up slightly since the start of June.

“The private sector is unable to create enough jobs . . . which bodes ill for the remainder of the year as the job retention scheme unwinds, unless business conditions improve very significantly over the rest of the summer,” said Gerwyn Davies, adviser at CIPD, the human resources professional body. He added: “Jobseekers will therefore face an increasingly uphill task in finding work.”

No clear north-south divide in pattern of job losses

At the start of the lockdown, the sharpest increases in the claimant count were seen in towns and cities that already had high levels of deprivation and precarious labour markets.

But clusters of unemployment are now emerging in more prosperous areas of southern England, especially in areas that could be exposed to a long term structural decline in sectors such as aviation and car making.

An analysis by the Centre for Cities think-tank shows that the biggest percentage point increase in the claimant count since the start of the lockdown has been in Luton — where jobs are under threat at the airline easyJet, the travel operator Tui and the carmaker Vauxhall.

Crawley, close to Gatwick airport, is also among the ten cities and towns worst affected, as are Slough, Northampton, coastal resorts such as Brighton and Southend, and London.

A bad UK-EU trade deal is better than no deal

Tue Jun 16 , 2020
It is a sign of how low expectations have fallen that UK and EU officials privately flagged it as positive that Boris Johnson did not stage a walkout from Monday’s talks on a new trade relationship. That the prime minister and his counterparts publicly agreed “new momentum” was needed in […] 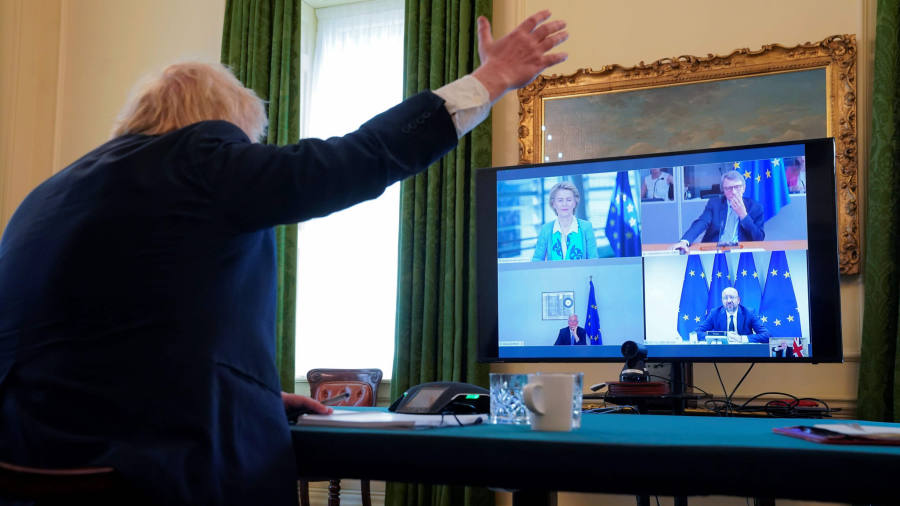