BERLIN (Reuters) – As workers across Germany downed tools during the coronavirus crisis and the economy slipped into recession, Berlin-based K. Rogge Spezialbau kept its builders busy at work. A construction site of a road construction company EUROVIA is seen at Molkenmarkt square in Berlin, Germany, May 14, 2020. Picture […]

BERLIN (Reuters) – As workers across Germany downed tools during the coronavirus crisis and the economy slipped into recession, Berlin-based K. Rogge Spezialbau kept its builders busy at work.

The specialist in interiors and facade renovations is one of Germany’s many construction firms that has kept the nation moving even when much of Europe’s biggest economy ground to a halt.

“Our company and the construction sector in general are definitely doing far better in this coronavirus crisis than companies in other sectors,” said Klaus-Dieter Mueller, a managing partner at the firm which employs 170 people.

“So we can’t really complain,” he told Reuters.

The coronavirus crisis has pushed Germany’s already slowing economy into a formal recession, after a 2.2% contraction in the first quarter followed a revised 0.1% fall in output in the fourth quarter of 2019.

Yet, construction industry, the Germany’s biggest employer, helped prevent a sharper slowdown that others have faced in Europe, such as France and Italy, whose economies shrank by 5.8% and 4.7% in the first quarter, respectively.

Unlike France, Italy, Britain and Spain, where construction sites fell silent for weeks, Germany’s 16 states allowed factories to operate and construction work to continue if workers adhered to social distancing and other safety rules.

But Germany’s builders, who started 2020 with a record-high backlog of new orders, kept going. The sector even expanded by 1.8% in March, compared to a rise of 1% a year earlier.

The car industry, meanwhile, contracted by 31% in March.

“The health of the construction sector will play a role in stabilising the economy this year, like it did last year,” said Michael Voigtlaender of the IW Koeln German Economic Institute.

The sector, which accounts for about 10% of national output, has been booming since 2010, fuelled by record-low borrowing costs, government incentives, higher spending on infrastructure and housing shortages.

Voigtlaender said the industry had faced labour shortages going into the crisis, which meant that even if some projects were cancelled in a downturn it would unlikely translate into layoffs from the sector.

The ZDB construction industry association said in April that only 37% of building firms had seen contract cancellations and only one in 10 said the pandemic has seriously disrupted business.

Relatively few building firms shifted employees to short-time work, a form of state aid that allows them to put staff on shorter working hours during a downturn to keep them on payroll.

Only 37% of builders were using the scheme in April, compared with 94% of companies in the car sector, according to a survey by the Ifo economic institute.

The industry still faces challenges. Infrastructure contractors worry that municipalities responsible for about two thirds of German infrastructure spending could cancel or delay some projects as tax revenues plunge due to the crisis.

Tim Lorenz, managing director at EUROVIA Germany, a road and railway engineering company, said his firm had fared well in March and April, only switching 5% of its 4,000 employees to short-time work following the cancellation of three projects.

“We expect this number to rise in the second half of the year in the absence of a political strategy to keep investments in infrastructure alive,” he said. “The overall outlook for the coming months is becoming less positive.”

Tue May 19 , 2020
BRUSSELS (Reuters) – France and Germany want a “green” European Union recovery from the coronavirus pandemic, including recovery roadmaps for all economic sectors and a minimum price for carbon permits, according to a plan that drew praise from some EU lawmakers. French President Emmanuel Macron listens at a joint video […] 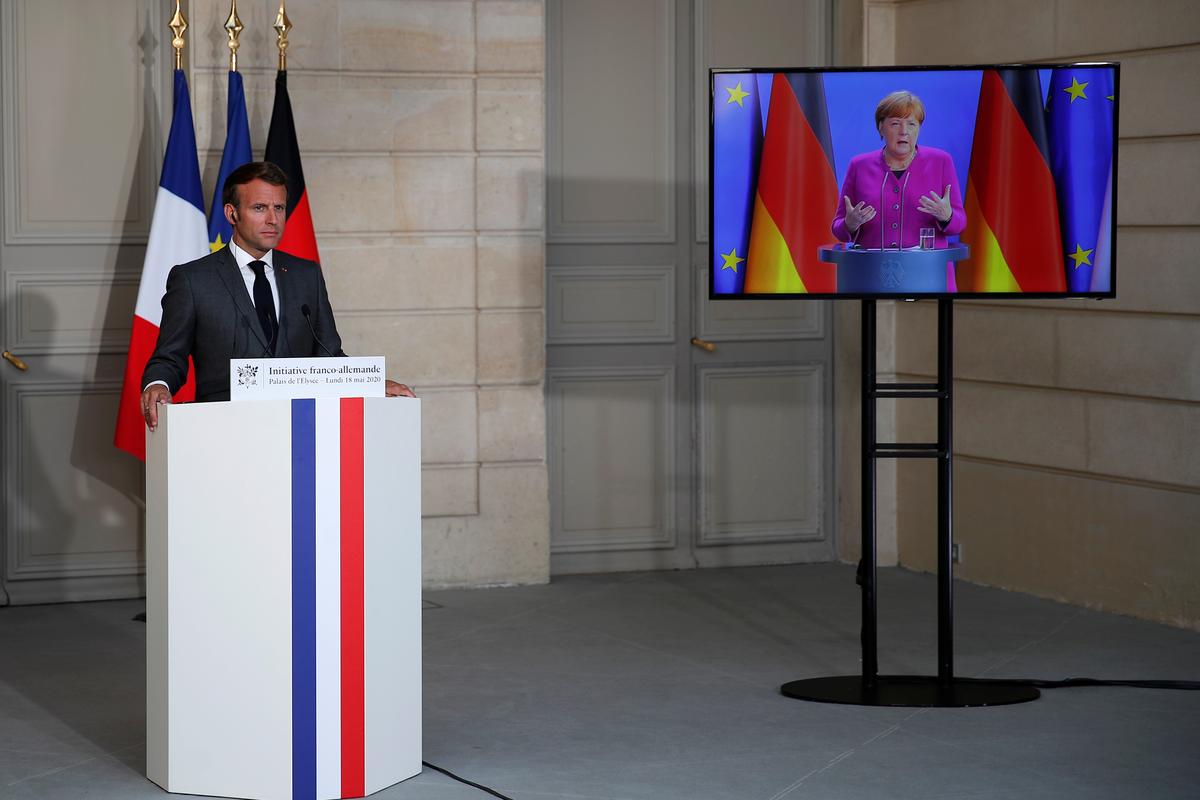