A mark of 999.9 fine sits on hallmarked one kilogram gold bullion bars at the Valcambi SA precious metal refinery in Lugano, Switzerland, on April 24, 2018.

Gold prices rose to a more than seven-year high on Tuesday on rising fears of a steeper economic downturn and amid massive liquidity measures by global central banks.

“The concerns about the economic outlook are particularly supportive for gold. Liquidity (from the Federal Reserve) combined with the background of lower interest rates makes gold a much more attractive proposition,” said Michael McCarthy, chief strategist at CMC Markets.

But he warned that in the absence of new news, there could be “modest pull backs as investors and traders reposition themselves”.

Many countries and central banks have taken fiscal and monetary measures to prop up their economies amid the coronavirus outbreak.

The Fed’s stimulus aimed at injecting liquidity into the virus-hit U.S. economy tend to weigh on the dollar, which makes gold relatively cheaper to buy, while lower interest rates reduce the opportunity cost of holding non-yielding bullion.

A steep economic downturn and massive rescue spending will  nearly quadruple the fiscal 2020 U.S. budget deficit to a record  $3.8 trillion, a staggering 18.7% of U.S. economic output, a Washington-based watchdog group said on Monday.

Meanwhile, the International Monetary Fund said it would provide debt relief to 25 member countries under its Catastrophe Containment and Relief Trust to allow them to focus more  financial resources on fighting the pandemic.

On the technical front, spot gold may test a resistance at $1,739 per ounce, a break above which could lead to a gain at  $1,767, according to Reuters technical analyst Wang Tao.

“Gold as a safe-haven has gained traction as currencies are being devalued by massive stimulus programs. This has also  increased physical demand of gold (such as ETFs) to hedge against the debasement of fiat currencies,” said Avtar Sandu, a senior commodities manager at Phillip Futures, in a note.

Tue Apr 14 , 2020
By Leika Kihara and Takahiko Wada TOKYO (Reuters) – The Bank of Japan will discuss further steps to ease corporate funding strains at this month’s rate review to pump more money to small firms grappling with slumping sales due to the coronavirus outbreak, sources familiar with its thinking said. While […] 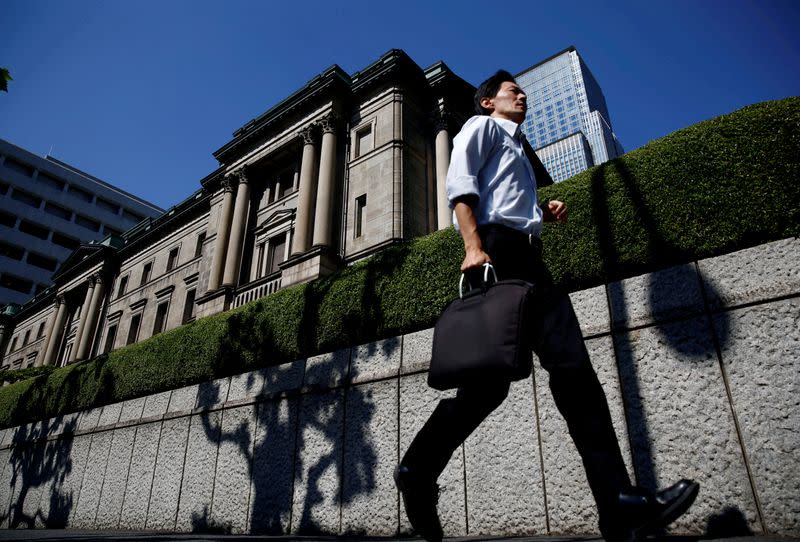