The UK has not yet met the five tests set out for easing the coronavirus lockdown, according to experts in health and economics, suggesting ministers will have to take a cautious approach to any relaxation in the coming weeks.

Across Europe, many other countries have started to gradually ease restrictions, although there has been little in the way of co-ordination.

Boris Johnson urged the public to have patience this week as the prime minister insisted he can only start easing the lockdown once the government’s tests are met to ensure a return to normal life persists.

The five criteria, announced by the government in mid-April, are not clearly defined, giving ministers some leeway in deciding when the UK might follow its continental neighbours. How much progress has been made so far?

Test 1: Ensure the NHS can cope

The NHS has survived the initial wave of hospitalisations without being overwhelmed. The number of people in hospital with illnesses related to Covid-19 has fallen from a peak of 21,000 on April 13 to 15,796 on April 27.

Intensive care units have coped. The latest figures show that coronavirus patients occupied 40 per cent of ICU beds in England and only 23 per cent in Scotland — well down from the peak in the second week of April.

Chris Whitty, chief medical officer for England, said it was “reasonably clear” the UK was through the peak of the infection in hospitals, although nowhere in the country was as yet seeing “a dramatic fall-off” in demand for hospital services.

Nigel Evans, chief executive of the Nuffield Trust, said “elements of the test have been passed” given the significant spare bed capacity in the NHS.

But he cautioned that it would be difficult to get the NHS back to normal because of supply chain difficulties and the need to segregate Covid-19 patients from others.

2: A sustained and consistent fall in daily death rates

The peak of hospital deaths was reached on April 8 and the rate has been on a downward trend since then. But the numbers are still high and are declining slowly, which means this test only gets a qualified pass.

In English hospitals, the latest figures show 857 people died on April 8. The daily rate has declined to around half that level as of April 22 — the most recent date for which there is almost complete data available — when the number of fatalities was 453 deaths.

But UK-announced hospital death tolls over the past week are still higher than in France, Germany, Spain and Italy, suggesting the nation is behind others in progress through the epidemic.

James Naismith, director of the Rosalind Franklin Institute at Oxford university, suggested a fast return to normality was impossible. He pointed out that the “slow decline is in painful and sharp contrast to how quickly we climbed the curve”.

Moreover, the Office for National Statistics data on community deaths, put overall UK death rates at a much higher level than in those countries that are easing lockdowns.

3: Rate of infection is decreasing to manageable levels

The key indicator, the reproduction rate of the virus — or R0, has fallen below 1 and implies the infection rate should continue to fall. But it is nowhere near manageable levels yet.

If the increase in testing is factored in, it is clear it will take some time to get to grips with the full extent of the spread of the virus.

In Germany, by contrast, which has had a much more extensive testing programme in place for weeks, the daily positive tests have been below 2,500 since April 19 with the latest figures falling below 1,000.

There were 43,453 tests carried out on Monday and the government insisted it would hit the 100,000 daily target by the end of the month, ie by Thursday.

Even it if achieves that target, testing must be accompanied by tracing and tracking. And there is scepticism such a comprehensive programme can be introduced quickly. “We’re talking weeks not days to get it up and running,” said Jill Rutter, a government expert at UK in a Changing Europe.

4: Confidence that testing capacity and supply of personal protective equipment can meet demand

The lack of testing capacity has hamstrung the government’s response to coronavirus. This became acute after March 12 when the authorities stopped testing people other than patients admitted to hospital because of a lack of capacity.

A survey this week by the Royal College of Physicians showed its members were more positive about access to testing but found the issue around availability of personal protective equipment was worse than three weeks ago.

It is this PPE crisis for the NHS that is even more acute in many care homes, where representatives say it is a long way from being fixed.

Martin Green, chief executive of Care England, said the problems had not been resolved as there were still shortages of masks and gowns. “We haven’t by any means cracked it and it’s not clear we’ve got a consistent [PPE] supply chain,” he said.

5: Confidence that any relaxation of restrictions would not risk a second wave

There is no doubt that officials think this test is currently being failed even though Prof Whitty acknowledged on Monday that the R0 was between 0.5 and 1 and the virus was therefore slowly dying out.

When the number of cases fall, this rate of infection would offer “greater room for manoeuvre” for ministers to discuss easing the lockdown, “but not a huge amount”, he said.

Imperial College London estimates the reproductive number to be 0.7 and inside a range of 0.6 to 0.8, which implies a slow and steady decline in the outbreak.

Most economists favour getting the caseload down and improving tracking and tracing so that lockdowns can be eased while containing Covid-19’s spread.

This is even more crucial given the lack of an effective vaccine, something Patrick Vallance, the chief scientific adviser, has previously described as a “long shot”.

Wed Apr 29 , 2020
WASHINGTON (Reuters) – The U.S. economy likely contracted in the first quarter at its sharpest pace since the Great Recession as stringent measures to slow the spread of the novel coronavirus almost shut down the country, ending the longest expansion in the nation’s history. FILE PHOTO: A shopper wearing a […] 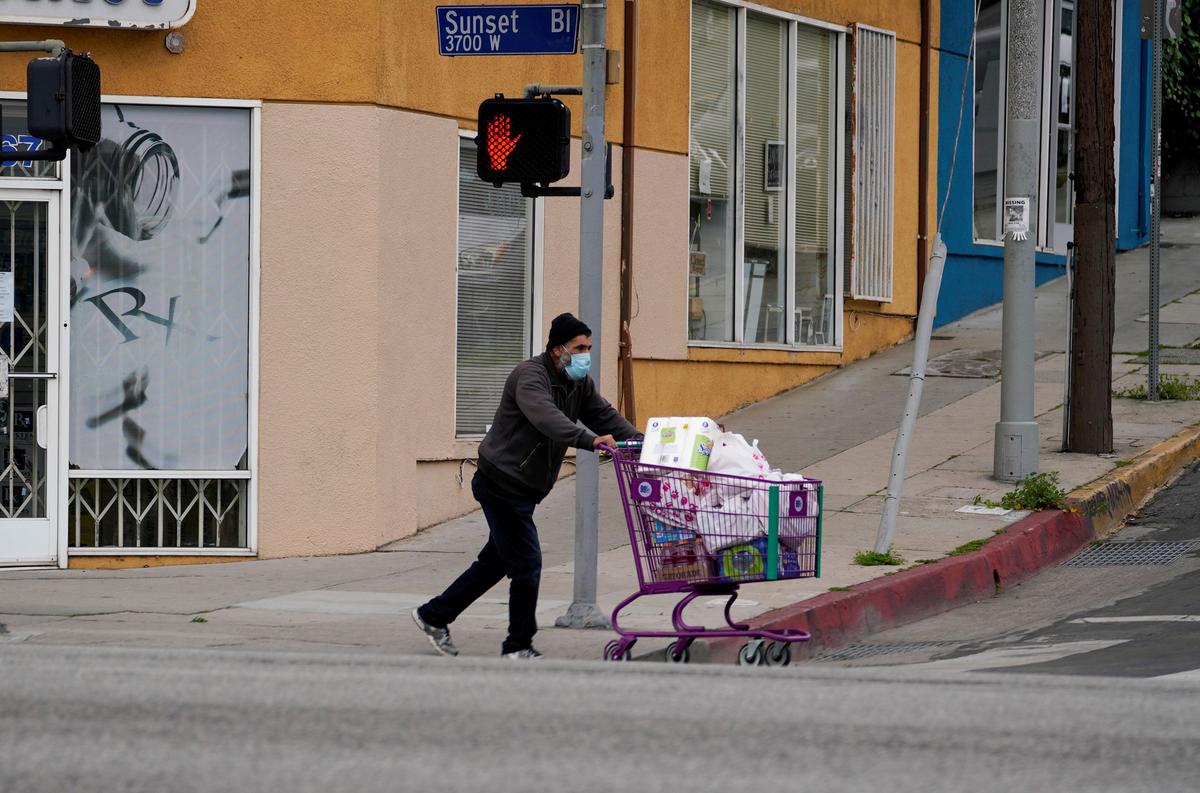