In more than 30 years of working for Royal Mail, one postman said he had never witnessed a period anywhere near as hectic as the peak of the coronavirus pandemic.

With the country in lockdown and all but essential shops closed, Britons stuck at home went on an online shopping spree that filled up mail sacks faster than even the busiest times of year.

“You can expect a few mental days a week or so before Christmas, but this was continuous week after week of grinding you down,” said Sean, who chose not to give his full name. “We almost got to the point where we couldn’t cope.”

In any other circumstance a parcels boom would be welcomed by Royal Mail, the 504-year-old British institution that traces its roots to the reign of King Henry VIII and now desperately needs to adapt to a digital age where letter writing is dying out.

But the gravest public health crisis in a century has tested the resilience and flexibility of an organisation that has struggled to modernise since its stock market flotation in 2013. Profitability has shrunk, reforms stalled and its shares are languishing at half the price of the initial public offering.

“Royal Mail was already looking quite weak and fragile before Covid-19 hit,” said David Kerstens, an analyst at Jefferies. “The acceleration in ecommerce anticipated at the time of the IPO was basically offset by Amazon [making] more of their parcel deliveries.”

When coronavirus struck, Royal Mail recognised it needed to be “re-engineered”, according to Shane O’Riordain, managing director of corporate affairs.

“The journey of an item from sender to recipient is a fundamentally physical task involving multiple handovers between different people,” he said. “Covid-19 is about reducing physical contact between people, so represented a major challenge.”

As well as rapidly recalibrating a complex logistics network that reaches into every street in the UK, a key priority was the safety of 90,000 frontline staff, and members of the public.

At the same time, managers had to maintain morale among a highly unionised and restive workforce. Only a week before Britain’s lockdown, members of the trade union that represents most Royal Mail staff had voted to go on strike — though the threat was immediately postponed in light of the situation.

As if that were not tumult enough, in the middle of the crisis the FTSE 250 group’s chief executive, Rico Back, suddenly quit.

While the viral outbreak magnified Royal Mail’s existential battle to complete its transformation from a legacy letters business into a 21st century parcels company, it also threw up a host of practical challenges for everyday operations. The postal operator, which also runs an international parcels division, has a duty to deliver mail six days a week across the UK at uniform prices.

The two-metre social-distancing rule was particularly problematic, given the company’s staff often work in proximity with each other.

Van delivery rounds in built-up areas were cut from two-person to one; five parcel hubs throughout the UK normally reserved for the peak Christmas period were reopened; and staggered shifts were implemented to avoid overcrowding in sorting offices built for letters, not parcels.

“Our employees have been remarkable,” said Ricky McAulay, director of national service delivery.

Royal Mail claimed its introduction of “contact-free” delivery — where a postman or woman leaves items outside a door and stands back two metres after knocking, with no need for a signature — was a first and quickly followed by other parcel carriers.

Having ceded ground in parcels over recent years to smaller rival such as DPD and Hermes, the major shift to online retail during lockdown was an opportunity not to be squandered.

While many consumers and some businesses stopped sending packages entirely, there was a surge in vital supplies such as prescription drugs and pharmaceutical products, later followed by books, children’s toys and garden furniture.

This forced Royal Mail, which processes 1.3bn parcels in the UK each year through its 1,400 delivery offices and 60,000 rounds, to lay on more lorries for certain shippers, accept goods at later hours and set up new trucking routes between its own warehouses. Guaranteed times for special deliveries were pushed back and more agency staff taken on.

“This is probably the biggest challenge that I’ve had in my time at Royal Mail — and I’ve been here approaching 30 years now,” said Nick Landon, managing director of parcels, who attended daily virtual meetings with an executive board to discuss the response.

Gestures of gratitude from the public lifted spirits, whether signs in windows, food and drink left outside or simple greetings.

But the extra workload, coupled with staff absences that peaked at one in five, took a toll on some employees, who were often handling bulkier loads.

Whereas letters are mechanically sorted and easily slot through letterboxes, Royal Mail still manually sorts most parcels, which require more handling and are less profitable. A consequence of Covid-19 was an acceleration in the chronic decline of letters, which the additional parcels failed to make up for financially.

The impact was laid bare last week, when Royal Mail revealed its main UK operation was losing about £1m a day. It announced 2,000 management job cuts as part of a cost-saving drive and cancelled this year’s dividend.

“Everybody is absolutely exhausted, physically and mentally. Normally this time [of year] we can rest with less work. Now we’ve more than Christmas amounts every day,” said Peter, a postman in Scotland, a month into the lockdown.

Given the added pressures, it did not take long for the company’s truce with employees to fray.

After the Communication Workers Union advised members not to work if they felt unsafe, a wave of unofficial walkouts rippled across the country from April, in protest at inadequate supplies of hand sanitiser and personal protective equipment, such as masks and gloves. Royal Mail eventually spent £40m on PPE — equivalent to more than one-fifth of its pre-tax profit in the financial year just gone.

Mr McAulay played down the actions as affecting just a “handful” of locations. “In some ways I’m empathetic because people were genuinely scared,” he added.

Several postal workers told the Financial Times that within a few weeks they had adequate provisions, but said it was sometimes difficult to observe social distancing.

Tempers flared again when CWU bosses were enraged not to be consulted before a decision in late April to temporarily suspend Saturday letter deliveries, fearing permanent cutbacks.

On May 15, after less than two years in the job, Royal Mail announced Mr Back’s immediate departure. His payout of severance, historic share awards and other sums could reach £1m; frontline workers were given a £200 bonus for their efforts.

The move into an interim executive position by chairman Keith Williams, an industrial relations veteran from his time at British Airways, appears to have lowered the temperature — for now.

“However, the return to overall good morale will be in how our ongoing dispute is resolved,” he added.

But if planning and a dedicated workforce enabled the postal service to continue functioning during the pandemic, it came at a price. The combination of social distancing and contingency measures had a negative effect on efficiency and piled on extra costs that hit the bottom line.

Mr Williams said coronavirus would have lasting effects and increase pressure on Royal Mail to speed up its metamorphosis. “People want more parcels and less letters . . . the future has been brought forward three years,” he said.

Sun Jun 28 , 2020
The government is to launch a new taskforce it says will accelerate the delivery of major projects as Britain tries to find a way out of the economic downturn caused by the coronavirus pandemic. The Infrastructure Delivery Taskforce charged with fast-tracking the building of schools, hospitals, roads and even prisons […] 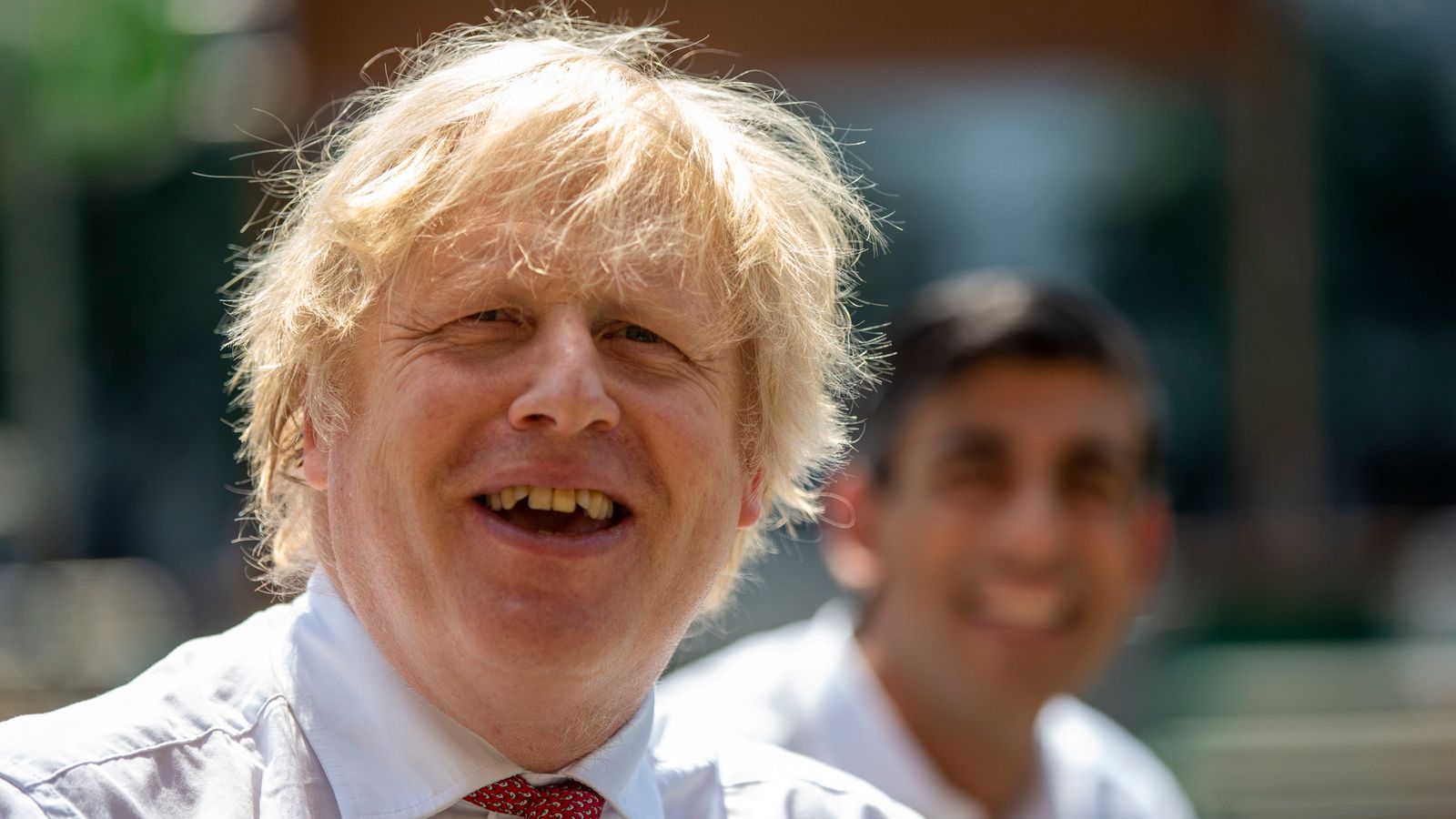