Boris Johnson has defended the first introduction of nationwide coronavirus restrictions in England since March, arguing that the steps were needed to keep schools and businesses open.

The prime minister admitted the rules around Covid-19 had become “complicated” over time and he outlined the new “rule of six”, in which individuals gathering in groups of more than six people will from Monday, be in violation of the law and risk being “dispersed, fined and possibly arrested”.

The intervention comes as infection rates in England have climbed rapidly in recent days, with more than 2,000 new cases each day since September 1.

The prime minister stressed the new measures — including marshalls to help maintain social-distancing measures in towns and city centres, new guidance for universities and greater enforcement of quarantine rules by the Border Force — did not constitute a “national lockdown”.

Mr Johnson said there will be some exemptions to the new rules, with restaurants and gyms still able to hold more than six individuals within their premises, provided they collect contact details.

“In the future, premises and venues where people meet socially will be legally required to request the contact details of a member of every party, record and retain these details for 21 days, and provide them to NHS Test and Trace without delay when required,” he said.

Mr Johnson’s comments follow growing concern within government, that the UK is on the cusp of a second wave of coronavirus. However, some within the scientific community have questioned the effectiveness of the new six-person limit.

Gabriel Scally, visiting professor of public health at University of Bristol and a member of the Independent Scientific Advisory Group for Emergencies, said: “I think it will be very confusing for people because workplaces, hospitality venues and public transport such as buses or Tubes are all likely to have more than six people in them.”

The new measures include restrictions on the opening hours of premises in some areas, with the government pledging to give additional support to local authorities to enforce the measures.

Andy Burnham, mayor of Greater Manchester — which includes the town of Bolton, home to the highest infection rate in the UK — said he supported the new initiatives. “I think the measures are needed because the government is clearly looking at the evidence across the country of the sharp increase in cases,” he said at a press conference on Wednesday.

Greater Manchester has also put forward a proposal to run its own test and trace system after members of the public said they had been asked to travel hundreds of miles to be tested.

On Tuesday the director of England’s coronavirus testing programme apologised to those struggling to secure tests and admitted there was a lack of capacity in laboratories.

Health secretary Matt Hancock on Wednesday said the “vast majority” of people had been able to access tests locally but stressed that individuals without symptoms should not be getting tested, a sentiment shared by the prime minister.

Mr Johnson said: “As we manage this period of high demand, it is especially important that if individuals don’t have symptoms, and have not been specifically advised to take a test, they should not be coming forward for a test — because they could be taking a test away from someone who really needs it.”

He said the government is hoping to carry out regular mass testing, which would enable people to navigate public spaces such as offices, theatres and sports venues more freely.

He added that an initiative will be piloted in Salford next month and if successful will “allow people to lead more normal lives, without the need for social distancing”.

Wed Sep 9 , 2020
Two UK companies will on Thursday launch rapid saliva-based tests for Covid-19, amid growing calls for more testing capacity in Britain as employees head back to their offices and students return to school. British tech company iAbra has developed a test that uses a mouth swab to extract saliva which […] 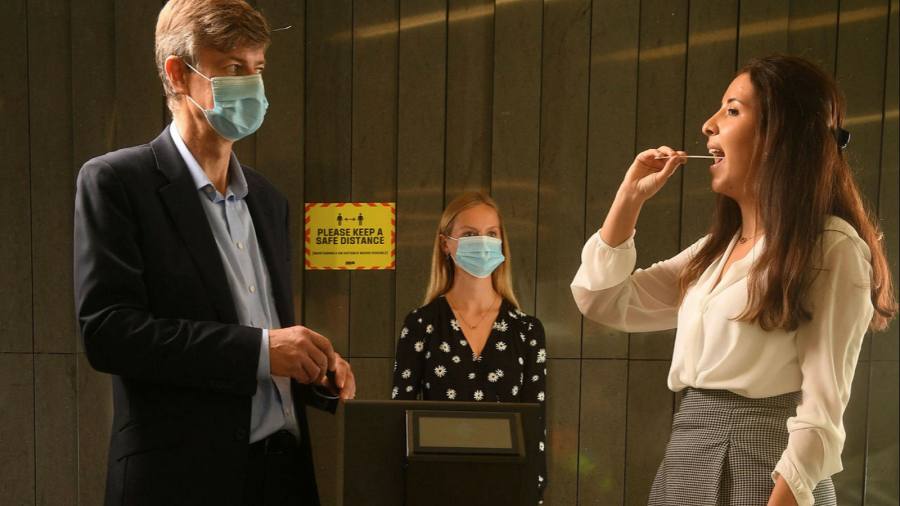