Britain went into lockdown on March 23 to try to halt the spread of coronavirus, but ministers never intended to close quite so much of the British economy.

While certain industries such as hospitality, “non-essential” retail and sport were largely banned — and are likely to remain so for weeks or months to come — most other businesses were supposed to stay open, but many did not.

As he prepares to ease the lockdown gradually, Prime Minister Boris Johnson will soon attempt to coax an anxious country back to work by publishing guides on how to make workplaces and transport safe in an era of social distancing.

But there are several big obstacles to success with the initiative, as listed below.

Alok Sharma, business secretary, is working with trade unions and business groups on government guidelines about workplace safety, intended to create a clear framework in which people can go back to work in sectors like construction or manufacturing.

Bosses and their workers badly need clarity from the top. For example, some employers said they closed their businesses during the lockdown not because of government prohibition but rather due to “societal pressure”, as people did not understand why they were still open.

Ministers including Mr Sharma have repeatedly tried, with only partial success, to “clarify” previous government guidance that allows certain industries such as construction to continue to operate, even if it is not always possible to maintain social distancing of 2 metres.

Separately employers have urged the police not to make life difficult for staff legitimately going to work, a regular occurrence according to some business leaders. Carolyn Fairbairn, CBI director-general, has called for “proportionate enforcement”.

But employers are also grappling with the issue of trying to bring back into the workplace staff who are anxious about leaving home and risk catching the virus, face transport difficulties or have problems at home such as childcare.

“You will have to consider the mental health implications for some employees,” said Mark Swift, head of communications at Make UK, the manufacturers’ trade body.

“You can’t just flick a switch and get people to come in. There are personal factors such as staff who need to care for a family member who is ill. We have made it clear that employers should not compel people to turn up.”

Mr Sharma’s draft guidelines, including a requirement for companies to produce risk assessments about how to maintain safe working, are intended to bring some legal certainty for businesses trying to operate in the coronavirus era.

But the issues are far from resolved. Adam Marshall, director-general of the British Chambers of Commerce, asked: “What happens if someone contracts coronavirus and gets seriously ill — or dies? If you are an employer, are you liable?”

Businesses want answers from Mr Sharma and so do trade unions, who warn that the draft guidelines are unacceptable because companies would not be required to publish their risk assessments and action plans.

“We want clear guidance to set out the minimum standards that employers must meet in order to protect public safety,” said Frances O’Grady, general secretary of the Trades Union Congress. “And we want ministers to outline a new tough approach to enforcement.”

Even if they are allowed to reopen or were never forcibly shut, many hospitality companies and business services groups risk finding they cannot operate profitably with social distancing rules and an absence of the sort of consumer and corporate demand seen before the virus crisis.

Gemma Tetlow, chief economist of the Institute for Government, a think-tank, said: “Even if the government lifted restrictions and provided incentives to invest in new technology and adaptations, some businesses may still choose not to reopen if they are worried that there may be limited demand for their products or services, or if other businesses on which they rely are not functioning.”

One of the greatest difficulties for the government will be designing the end of state subsidies such as the flagship job retention scheme. The risk is that without such support, more companies will go bankrupt and unemployment will surge further.

The government is looking to taper out the programmes and differentiate support by industry, but it has not settled on a firm plan yet.

The prime minister’s penchant for snappy three-word slogans, for example “Get Brexit Done”, was put to powerful effect with the lockdown edict: “Stay at Home.”

Isaac Levido, the Australian campaign strategy and mastermind of Mr Johnson’s 2019 general election victory, has been charged with coming up with a new message that somehow urges people to start to return to work, while warning that the virus remains a real threat.

Mr Johnson is expected to set out the new strategy on Sunday, aimed in part at the 35 per cent of Britons, according to an Ipsos Mori poll on May 1, who would feel uncomfortable going back to work.

The fact that Mr Johnson told The Sun he almost died from coronavirus in a London hospital — “it was 50-50 whether they were going to have to put a tube down my windpipe” — may not have been the most reassuring message to those feeling trepidatious about leaving home.

How to move workers on to the land

Mon May 4 , 2020
As strawberries, lettuces and broccoli ripen in the spring sun, coronavirus poses an insidious threat: that there might not be enough people to pick them. Amid virus lockdowns and travel bans, UK farmers are scrambling to fill about 70,000 seasonal picking jobs normally done largely by migrant workers from eastern […] 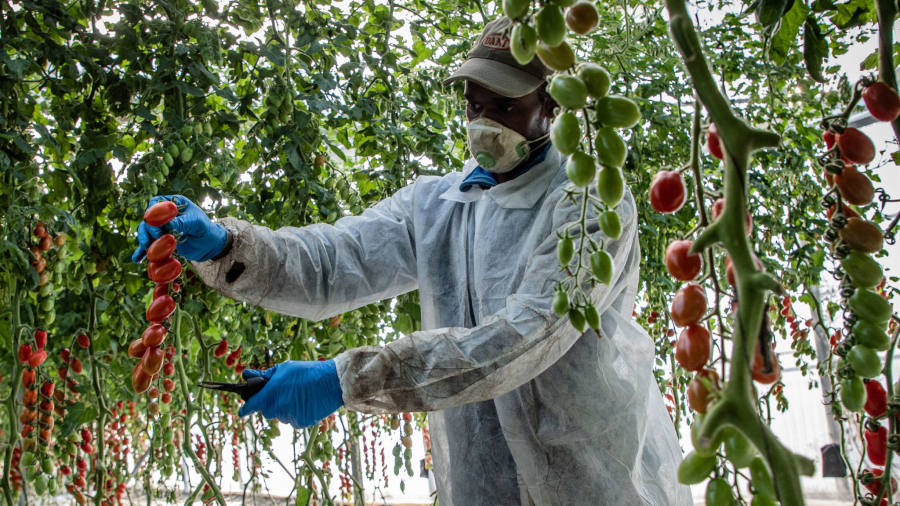