Irish premier Micheál Martin said Boris Johnson had a “genuine desire” to finalise a UK-EU trade deal, and that the British prime minister did not want to compound the coronavirus crisis with a “no deal” economic shock.

Mr Martin sounded an optimistic note on Thursday after a lunch meeting in Northern Ireland with Mr Johnson. He said there was a “landing zone” in view in trade talks, which both sides want to wrap up by October.

“My own gut instinct is that there is a shared understanding that we don’t need another shock to the economic system that a no-deal Brexit would give or that a suboptimal trade agreement would give to our respective economies,” Mr Martin told reporters.

The meeting at Hillsborough Castle, outside Belfast, was the first between the British leader and Mr Martin since he became taoiseach in June. It comes a day after official data showed the pandemic has pushed the UK into its deepest recession on record.

Mr Martin said his UK counterpart had signalled a “genuine desire” to reach a comprehensive trade agreement before the end of Britain’s transition from the EU in December.

Although Mr Johnson has claimed previously that Britain can “easily cope” with no-deal Brexit disruption if agreement is not reached, Mr Martin’s remarks point to anxiety in Downing Street about the risk of a second shock should the trade talks fail.

Mr Martin said: “We both agreed one thing: Covid has had a very negative impact on our respective societies and economies.

“The last thing we all need now is a second significant systemic shock to our economic systems and that’s what the no-deal Brexit would present on top of or alongside Covid.

“So I did take from that a genuine view that a comprehensive free trade agreement was in the best interest of all concerned and that the British government was sincerely seeking such an outcome.”

Downing Street said Mr Johnson had reiterated his desire to conclude a trade deal with the EU27, but that he was not prepared to accept an agreement at any price. Mr Johnson insists any deal must respect British sovereignty.

Asked whether it was for British or European negotiators to move in the trade talks to secure a deal, Mr Martin said he was not the referee.

“But suffice to say where there’s a will there’s a way. It seems to me that there is a landing zone if that will is there on both sides — and I think it is, on the EU side and the British side, to find that landing zone.”

In a photo shoot with Mr Martin, he said he looked forward to developing the British-Irish relationship “in all sorts of ways: east-west, north-south, you name it”.

Mr Johnson also told local reporters that the new checks on goods entering Northern Ireland from Britain after Brexit did not amount to a border. “There will be no border down the Irish Sea — over my dead body,” he said.

Mr Johnson met separately with Northern Ireland first minister Arlene Foster and deputy first minister Michelle O’Neill. He set out plans to establish a forum and historical advisory panel to mark the centenary in 2021 of Northern Ireland’s establishment as part of the UK before the rest of Ireland achieved independence from Britain.

The plan has divided Mrs Foster, whose Democratic Unionist party is strongly pro-Britain, and Ms O’Neill, whose Sinn Féin nationalist party wants the region to join with the Irish Republic.

After meeting the prime minister, Mrs Foster said the looming centenary should be an inclusive event for the “whole of” Northern Ireland to look to the future.

But Ms O’Neill said the centenary of Ireland’s partition was “not a cause for celebration” for nationalists. “Partition failed this island and failed Britain,” she said.

Thu Aug 13 , 2020
The number of Americans seeking unemployment benefits has fallen below one million for the first time since the start of the COVID-19 pandemic in the US. However, last week’s drop has been put down to the ending of a $600 weekly supplement, which is likely to have discouraged some from […] 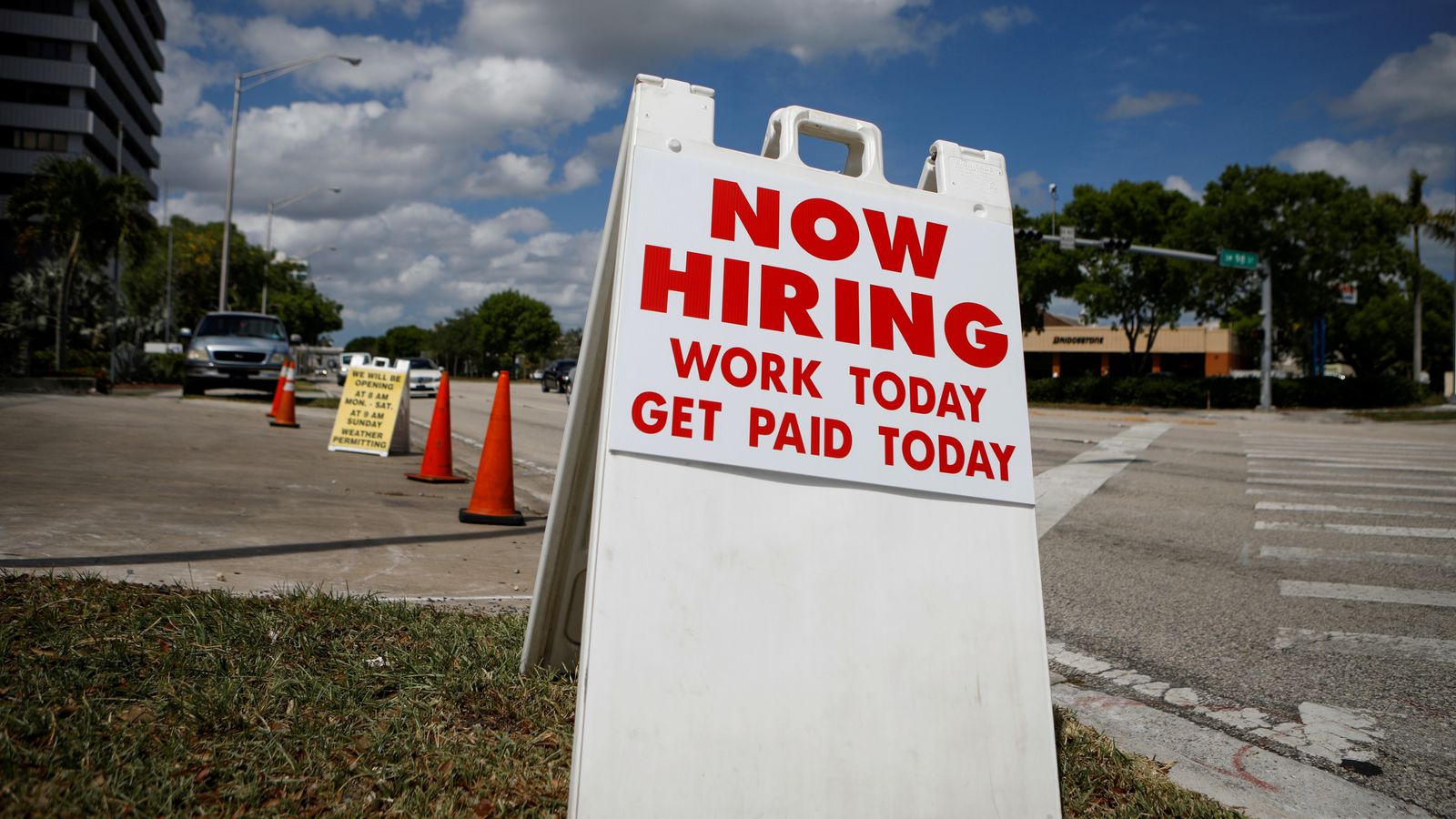