Boris Johnson was breathless, his face etched with the strain of fighting a personal bout of coronavirus, but he was determined to project optimism, insisting the country was about to exit a long Alpine tunnel with “the sunlight and pasture ahead of us”.

The prime minister on Thursday promised a “road map” about how the UK would exit the lockdown, but he sounded a warning that if the country was not careful it would end up taking a detour straight into the side of another mountain. The route ahead would be long and arduous.

Mr Johnson and his cabinet are confronted with one of the biggest political decisions of modern times: how to open up Britain’s economy in a way that does not lead to a second big peak in Covid-19 and another, potentially catastrophic, lockdown.

Carolyn Fairbairn, director-general of the CBI employers’ federation, wrote on FT.com: “As one company told me ‘Knock me down once and I’ll get up; knock me down twice and I might not’.”

Mr Johnson, who announced Britain was past the peak of the virus, has come down on the side of Matt Hancock, health secretary, in insisting the disease must be fully tamed before an easing of the lockdown starts.

Ministers speak warmly of the South Korean experience, where virus infections were aggressively driven down to a point where any flare-up of the disease could be quickly detected and dealt with through a “test, track and trace” regime.

Britain could still be weeks away from reaching the point where Covid-19 is fully suppressed. Moreover, Matthew Gould, chief executive of the NHS digital arm, told MPs this week it could be “two or three weeks” before a smartphone tracing app is ready that will alert people if they have been in contact with someone with the virus.

Mr Johnson and the cabinet will review the lockdown measures, introduced on March 23, on May 7 — part of a regular three-weekly appraisal process — but Tory MPs have been warned that any easing of restrictions will take place in baby steps.

Indeed, Downing Street has said that any easing of restrictions could also be offset by “tightening” in other areas. Ministers are weighing whether to quarantine travellers arriving in the UK and Mr Johnson said people would soon be encouraged to wear face coverings in public.

Much of the focus of the lockdown debate has been on when ministers will reopen parts of the economy and society that were closed after March 23: notably schools, “non-essential” shops and the hospitality sector.

With a vaccine or drug treatment for coronavirus some way off, the country will have to get used to it

Gavin Williamson, education secretary, told MPs this week that when schools reopen to all pupils it will be done in a “phased” manner.

Conservative MPs have been briefed that the earliest that schools might start to open their gates will be after the late May half term holiday, but they could well stay locked until after the summer. Mr Williamson said there would be no special August openings.

Any reopening of non-essential shops will also be phased, with Tory MPs hoping that outdoor retailers such as garden centres might be first in line. Dominic Raab, foreign secretary, this week sounded sceptical about even this limited move.

While some clothes shops, nail bars and tanning salons might start to open over the summer with social distancing measures in place, things look bleaker for pubs, cafés and clubs. Dame Carolyn admitted the hospitality sector would still be on its knees in the autumn.

But ministers are also grappling with an even greater problem: how to fire up the rest of the British economy — the vast swath of companies which are still allowed to trade but are either closed or operating well below capacity.

Ministers admit their “stay at home” message to the population has proved so effective that many people were now reluctant to go to work, while some company bosses decided to shut down rather than try to do business in such a bleak environment.

“People are scared,” admitted one minister. Another minister said there had been a “misconception” among businesses and the public about what was banned. Mr Johnson said the wearing of face coverings was partly aimed at “giving people the confidence that they can go back to work”.

Business leaders said the police have made things worse through “heavy handed” enforcement of social distancing, including on building sites, many of which closed down soon after the lockdown was introduced.

The manufacturing sector has also been hit hard, and Alok Sharma, business secretary, has been working with corporate leaders and trade unions to try to coax this and other industries back to life.

In the coming days Mr Sharma will publish detailed “workplace by workplace” guides, agreed with companies and unions, intending to show how people can return to work safely, even if it is not always possible to be 2 metres apart.

This kind of information is aimed partly at providing advice on how to reopen closed sectors of the economy, but is also directed at those industries which are already allowed to function.

Office staff will continue to be encouraged to work from home for months to come, relieving pressure on public transport networks.

Mr Sharma’s guides will be the first blueprint of what Britain’s workplaces will look like in the “new normal” era of social distancing. With a vaccine or drug treatment for coronavirus some way off, the country will have to get used to it.

Ford wants to restart U.S. car plants shut by coronavirus, if it can convince union

Thu Apr 30 , 2020
DETROIT (Reuters) – Ford Motor Co (F.N) on Thursday outlined the safety measures it will institute to restart its most profitable U.S. plants amid the coronavirus pandemic, expanding on similar efforts by General Motors Co (GM.N) and Fiat Chrysler (FCHA.MI)(FCAU.N) to convince leaders of the United Auto Workers union to […] 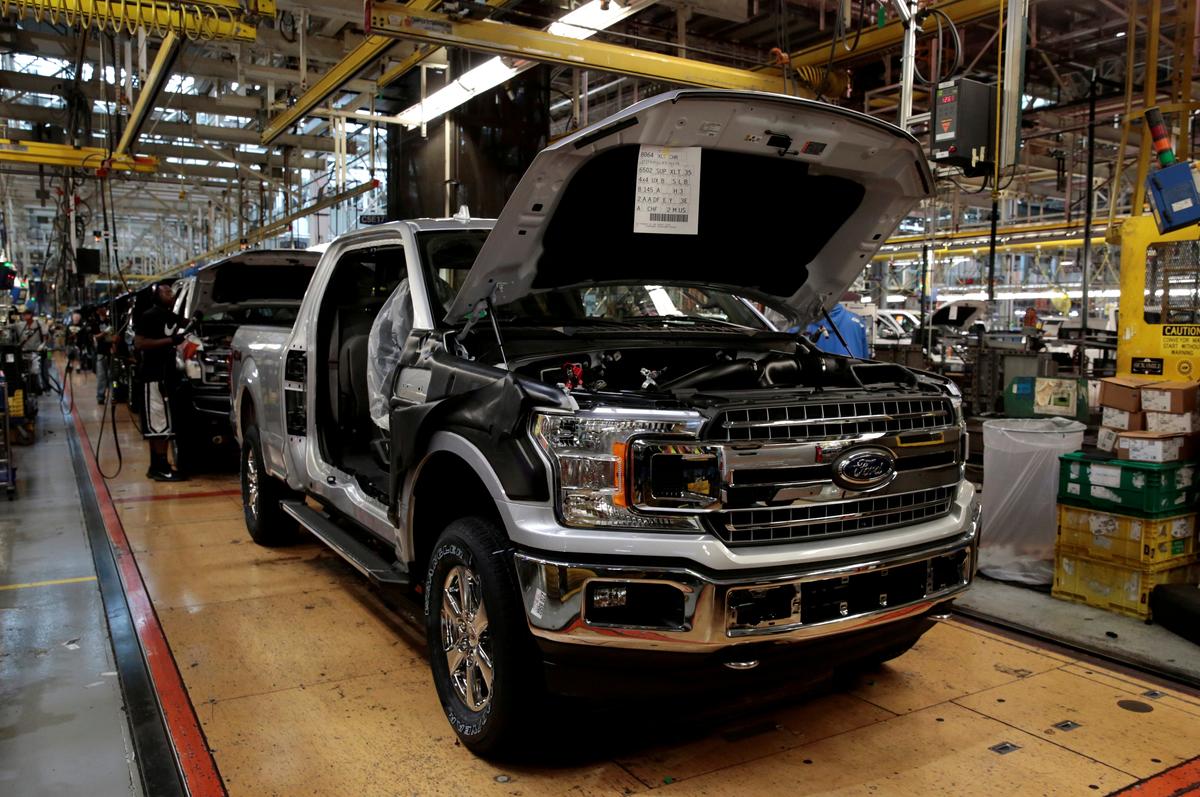