LONDON (Reuters) – Many of the City of London’s bankers and traders will be working from their kitchens or bedrooms for at least a year under some scenarios being planned by finance companies in Britain.

FILE PHOTO: Empty offices are seen at lunchtime in Canary Wharf, as the number of coronavirus disease (COVID-19) cases grow around the world, in London, Britain March 19, 2020. REUTERS/Dylan Martinez

Banks, insurance companies and asset managers have had to work remotely since the country locked down in March to fight the coronavirus pandemic.

The radical shift from trading floors to people’s homes has been deemed a big success in coping with record breaking volatility across financial markets. As a result, the City of London’s financial services companies are in no hurry to go back to business as usual.

“Now the technology for working from home has been proven, firms are doing a lot of thinking and some of the changes we have seen could be adopted in the longer term,” Andrew Rogan, director of operational resilience at UK Finance, a banking industry body, said.

“Banks are working on multiple return to the office ‘scenarios’, including one where most staff still work from home in the medium term,” he said.

Prime Minister Boris Johnson has set out a gradual easing in lockdown restrictions, but finance industry watchdog the Financial Conduct Authority said it was still the case that for now only “key workers” in the finance sector should travel to their offices.

Restrictions are expected to be lifted further in the coming months, but many firms are anticipating a very gradual return to work as densely packed high-rise offices with crowded lifts are tough places to implement social distancing.

Banks are facing mounting losses on loans to companies and households as Britain heads for its deepest downturn in 300 years, increasing the pressure to cut costs, bankers said.

In the past, banks made savings by cutting staff and bonuses, but the success of working from home has pointed to other ways to save money via office space, back-up sites and also technology.

“By introducing reduced hours, branch staff have also been able to support contact centres and this additional activity could form a blueprint for how branches could be used in the future,” Rogan said.

Banks are under pressure from lawmakers to avoid closing more branches and finding other uses for them could be one answer.

Barclays CEO Jes Staley said last month that the notion of putting 7,000 people in a building in London’s financial district may be a thing of the past.

“I don’t think any of us imagined quite how effective it would be working in this way, holding board meetings, holding discussions with multiple participants,” said Norman Blackwell, chairman of Lloyds Banking Group (LLOY.L), told a City & Financial webinar.

British property company Land Securities (LAND.L), which owns several properties in London’s financial district, said on Tuesday that only around 10% of its office space was in use at the end of March.

Some City of London businesses are looking at ways to get staff back into offices, with the London Metal Exchange asking employees how they feel about returning, its CEO Matthew Chamberlain said.

“There are people raring to get back, but also some are very understandably concerned about the commute,” Chamberlain said in reference to avoiding infection on London’s normally crowded transport network.

“What we see is a very gentle lifting, which will see people who aren’t comfortable coming in working from home for potentially the next year,” Chamberlain said.

The LME has suspended metals trading on its circular trading floor, known as the “ring”, where traders shout and signal trades to one another.

“The ring will come back. I think it will be a while as you can’t have a socially-distanced ring,” Chamberlain said.

The government has said that those who can work from home should continue to do so for the time being.

With home working here to stay at least for the medium term, companies are looking at how to protect themselves more effectively from cyber attacks.

“As insurance moves to more remote working, there is a greater risk of fraud and hacking,” said Bruce Carnegie-Brown, chairman of the Lloyd’s of London insurance market.

“We do now need to ensure we have resilience in remote working systems,” he said.

Home-working has its fans and detractors. For some financial industry staff it has brought welcome flexibility, while others feel that physical, face-to-face interaction can solve issues faster than an online meeting using Zoom or Skype.

Anne Richards, CEO of Fidelity International, said the asset manager has been able to improve engagement with clients during the pandemic.

“What will be interesting is whether we can sustain this in the next 12 or 18 months because people do get Zoom fatigue,” Richards said.

Tue May 12 , 2020
Ryanair chief executive Michael O’Leary condemned the 14-day quarantine plan on passengers arriving in the UK as “nonsense” with no scientific basis behind it as the airline pledged to resume 40 per cent of flights from July. Speaking at the FT’s Global Boardroom event on Tuesday, Mr O’Leary said: “We […] 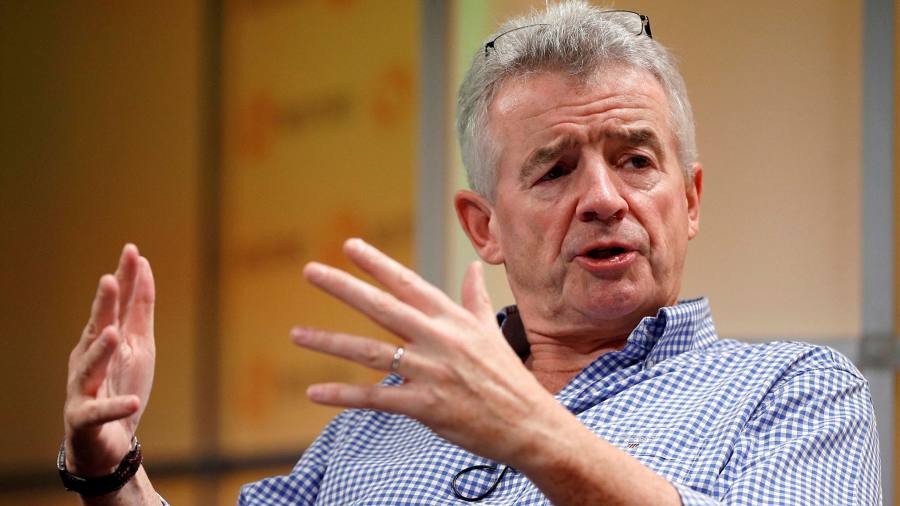