In July, Tel Aviv-based corporate lawyer Ami H Orkaby bought an apartment in London’s Mayfair. When he can fly to London he intends to use it himself, making the most of the expensive restaurants, the shopping and Annabel’s private members club on his doorstep.

“I am confident that Mayfair will bounce back after the pandemic, like it has done many times before in history,” he says. “I saw an opportunity to buy in the current market, with a weak pound and a softening of prices.”

These days, wealthy international buyers are conspicuous by their absence in parts of central London. Some streets remain eerily quiet and free from the supercars that regular visitors like to bring over for the summer.

The lack of buyers and renters from overseas has hit the local sales and lettings markets. While parts of the country underwent something of a “mini boom” when the housing market reopened after the Covid-19 shutdown — the UK’s average property price surged in August to record levels, according to Nationwide — demand for London’s prime homes has been slower to bounce back.

With so much interest in suburban and rural living recently, we took a look at the property market in the capital’s most exclusive neighbourhoods, to see how its luxury real estate is being affected by the pandemic.

How many homes are selling?

In July and August, the number of homes sold (exchanged) across London’s prime areas across all price brackets was down by 24 per cent compared with the same period in 2019, according to data from LonRes, a research company.

The biggest declines were for cheaper homes — sales of those priced under £1m dropped 36 per cent; for those priced between £2m and £3m, transactions were down 24 per cent.

However, for the capital’s most luxurious homes, those priced above £5m — where sales tend to be less reliant on credit — transactions in July and August were actually significantly higher than they were last year: up 31 per cent on the same period in 2019.

Marcus Dixon, head of research at LonRes, says he thinks the prime London market has been resilient. “Transaction volumes are recovering,” he says. While sales are still down, the number of properties going “under offer” in August was 8 per cent higher than in the same month last year.

Guy Gittins, managing director of Chestertons, which specialises in selling homes in prime central London, says his agency had the busiest July in four years. That month, they dealt with 1,150 offers and agreed the sale of 272 properties, compared with 780 offers and 181 agreed sales in July 2019.

One of Chestertons’ sales agreed in July was a three-bedroom apartment in Mayfair that went for £4.65m. The Hong Kong-based purchaser, who had viewed the apartment a year earlier when the asking price was £5.95m, now thought it looked good value.

The property was initially put on the market back in May 2018 for £6.5m — meaning the final sale price was 28 per cent lower than the seller had originally hoped for.

Savills, though, expects prime house prices to fall 2 per cent this year, and predicts slower price growth than after previous downturns due to the pandemic’s impact on the global economy and wealth generation.

“The pace of the recovery will be dictated by the lifting of travel restrictions,” says Lucian Cook, Savills’ residential research director, who is confident London’s appeal to overseas buyers will endure.

The lack of overseas buyers

In the 11 weeks to mid-August, the number of new buyers registering with Savills who were looking for £1m-plus homes in the south of England, excluding London and the commuter belt, was up 120 per cent on the pre-pandemic average.

In central London, where international buyers have been unable to view homes because of travel restrictions, prime registrations were down nearly 20 per cent.

This has meant UK-based buyers have faced less competition, agents say. Peter Wetherell, chief executive of Wetherell estate agency, points to the sale of a property at 47 Grosvenor Square for £18.6m, which went to a UK-based family in August within 24 hours of it going on the market.

As in Mayfair, the lack of international buyers in the Knightsbridge and Regent’s Park areas is a growing concern. “They still want to buy in London but can’t get here,” says Paul Finch of Beauchamp Estates. Other world cities face the same problem, he adds: “Which other cities might [investors] choose? The grass is not greener in the markets of New York, or Hong Kong.”

In Hong Kong, which had experienced widespread civil unrest and pro-democracy protests before the arrival of Covid-19, sales of properties priced above HKD $20m ($2.56m) dropped by 17 per cent in the first half of 2020, compared with a year earlier — reaching their lowest level since 2016, according to JLL, the global property company.

Estate agents in the UK capital argue that upheaval elsewhere in the world could benefit London’s prime market. Many cite the possible demand from the 200,000 Hong Kong citizens who, according to Foreign Office estimates, could move to Great Britain in the next five years.

A steep drop in rents

Travel restrictions have also had a big impact on the rental market, which has been hit by a sharp drop in demand and significant increase in supply. Since June, the number of new lets every month has been 25 per cent lower than in the same month in 2019, according to LonRes. Meanwhile, there are now 60 per cent more properties on the rental market than a year ago.

The lack of tourists has forced Airbnb landlords to list their homes on the long-term rental market. Since May, about 12 per cent of all the new homes available to rent in London’s Zone 1 were previously let on a short-term basis, according to Hamptons, which calculates that the average rent in inner London in July was 8.4 per cent lower than in July 2019.

“After six months of receiving no rental income, the high service charges and mortgage payments are beginning to bite so landlords are staring down the barrel,” says Cory Askew, director of central London sales at Chestertons. “Some are selling up, others are dropping their prices.”

“It’s a great time for tenants to negotiate 20 per cent off their rent,”
says Gittins.

In recent weeks, the popularity of London’s prime “villages” — smart, green areas such as Richmond and Hampstead — has surpassed the capital’s traditional golden postcodes in Belgravia, Knightsbridge and Kensington, says Camilla Dell of Black Brick, a buying agent.

In anticipation of future lockdowns, buyers are looking for access to parks (for all those quarantine dog purchases) and good high streets.

“Buyers might only move 2km in search of a better environment, and more space, for the same budget,” she says. Now, they might opt for a house in St John’s Wood in north London, rather than a flat in Marylebone in central London; or a four-bedroom house in west London’s Fulham with a garden, in preference to a two-bedroom flat in South Kensington.

FT subscribers can sign up for our weekly email newsletter containing guides to the global property market, distinctive architecture, interior design and gardens.
Sign up here with one click

In Chelsea, the market for homes below £2m has been the strongest, driven by purely UK-based buyers, says Percy Lendrum of estate agents Dexters. “A two-bedroom flat in Lennox Gardens sold within 48 hours for well over the asking price of £1.25m after five offers.” Such properties overlooking communal gardens are much more likely to sell after Covid-19 than those without, he says.

But the future of prime central London all hinges on whether people will actually want to live and work there post-pandemic, or if the city endures another lockdown.

“When we do viewings there, it’s clear that the buzz and many of the things that make the city great are just not there right now,” says Dell. “But it’s too early to say whether the shine has gone off London as an investment.”

Properties for sale in London now

A two-bedroom apartment in the heart of Knightsbridge, a short walk from Hyde Park and Harrods on Brompton Road. The property, which measures approximately 1,115 sq ft, is on the fourth floor of a portered housing block. Available through Marsh & Parsons.

A modernised three-bedroom mews house in South Kensington, a short walk from the Natural History Museum and Kensington Gardens. The property, which has more than 2,200 sq ft of internal living space, has two bathrooms and a roof terrace. Available through Knight Frank.

A four-bedroom luxury apartment in Grosvenor Square, one of the most exclusive addresses in Mayfair, just a few minutes’ walk from the boutiques on Bond Street and Mount Street. The property is on the third floor. Available through Savills.

Fri Sep 25 , 2020
The West End entertainment giant which owns the Piccadilly and Apollo theatres is bringing in a new investor to secure new funding aimed at steering it through the coronavirus crisis. Sky News has learnt that shareholders in Ambassador Theatre Group (ATG) have agreed to sell a small minority stake to […] 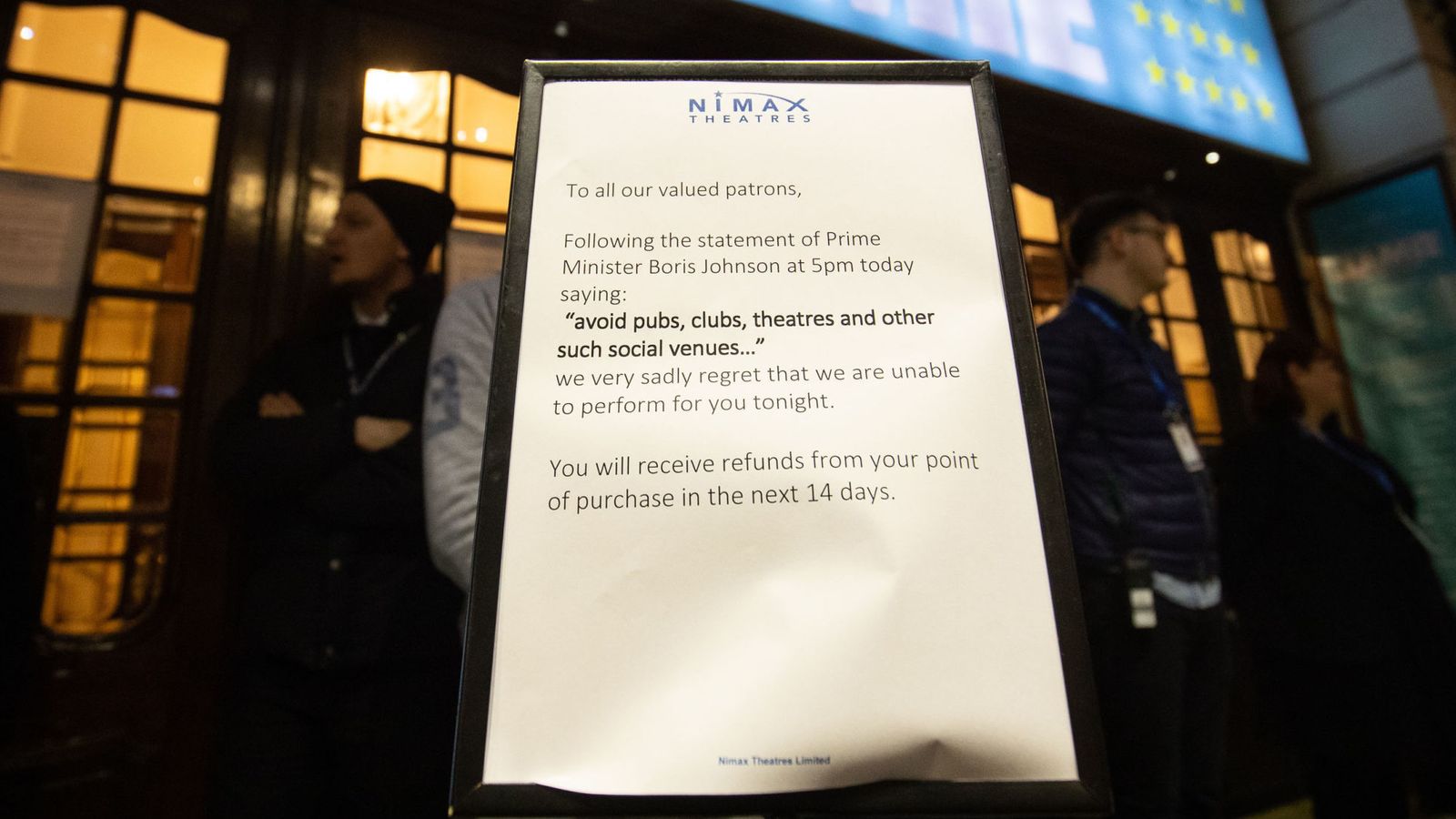